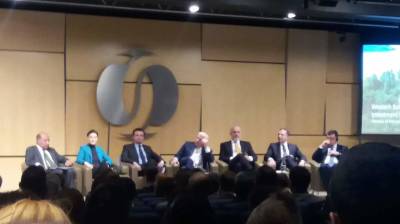 The three founders of the so-called “mini-Schengen” in the Western Balkans, Albania, North Macedonia and Serbia, urged their neighbours to join the initiative during the European Bank for Reconstruction and Development’s Western Balkans Investment Summit in London on February 24.

The leaders of the three founding countries agreed on concrete steps to eliminate obstacles to the free movement of people, goods, services and capital in November, with the final aim of securing EU membership.

Among these are an agreement to allow free travel between the countries only using an ID card, and a common work permit that would allow people to work in all three countries. The free and fast movement of goods will be encouraged by the introduction of a 24-hour working time for all inspection services with a focus on phytosanitary and veterinary inspection.

However, so far the remaining three aspiring EU members from the Western Balkans region have been reluctant to join.

Speaking at the London summit, Serbian Prime Minister Ana Brnabic said she hoped the rest of the region would join soon.

The initiative is “really something that can in the most tangible possible way contribute to us being presented as a united market and also offers a very different future to youth from the Balkans,” Brnabic said.

Edi Rama, the prime minister of Albania, which, along with North Macedonia, was denied the chance to start EU accession negotiations in October, talked of the need to act rather than waiting for the EU to “do things for us”.

“We have to change the paradigm for next generation, fight for foreign investment … we can’t wait to join the EU to get a bigger space of opportunities. If we are able to open our borders as soon as possible for people, goods and services … we can say here is a much bigger market than when every country is separated from each other.”

On a similar theme, North Macedonia’s interim Prime Minister Oliver Spasovski talked of the need to empower the region though regional cooperation. “Mini-Schengen is a good opportunity to open perspectives for our region all the way to actual membership of the EU,” he said.

However, observers from outside the region have been more cautious on the creation of the “mini-Schengen”, not least because of the previous initiatives to achieve the same goals.

“I can only hope the Western Balkans will be increasingly viewed as single market, it is not yet. There was a regional initiative announced three years ago for the creation of a regional economic area, and countries in the region are also members of [the Central Europe Free Trade Agreement] CEFTA, but it is high time there was a reinvigorated effort,” said Zsuzsanna Hargitai the EBRD’s director for the Western Balkans, in an interview with bne IntelliNews ahead of the summit.

“Most importantly there simply needs to be an implementation of the free trade agreement and the understandings the six countries made under the regional economic area. Now is the time to have another look at it, because it’s now hurting the economies.” Commenting specifically on the “mini-Schengen” regional economic area, Hargitai pointed to two main positives: the ownership of these countries, and that they are looking at very pragmatic steps to implement it.

“However, we are one of many who say they should make it inclusive,” she added. “In addition, while it is excellent they agreed to apply the highest standard among the three countries, for example on phytosanitary standards, are these the standards they already committed to under the regional economic area? Let’s have a higher aspiration and not undermine the commitments already undertaken.”