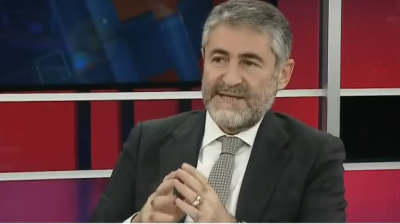 Disparaged and mocked as the 'Nebati Comet', Turkey's new finance and treasury minister is building up a reputation for baffling the markets amid the country’s economic carnage.

Nureddin Nebati, a loyalist appointed six weeks ago by President Recep Tayyip Erdogan to back him in his self-declared “war for economic independence” and fight to escape alleged market machinations of the “global barons of finance”, was meant to reassure investors. Instead, it appears, he’s puzzled them.

Reuters on January 17 recapped on how last month, when asked to provide details of an initiative to stem the collapse in the Turkish lira, the 58-year-old Nebati found a novel way to explain his strategy.

"I won't give a number now," he told a surprised television interviewer. "Can you look into my eyes? What do you see?... The economy is the sparkle in the eyes."

Hitting out at Erdogan and Nebati for taking Turkey down an unorthodox economic path that threatens disaster—Erdogan has doubled down on his strategy of easing interest rates despite soaring inflation—Meral Aksener, who leads the IYI opposition party said: "Instead of instilling confidence in the economy, you took steps that petrified everyone. As our nation is hit, the 'Nebati Comet' you brought to the helm of the economy... shamelessly speaks of the 'sparkle in his eyes'."

Nebati’s responses to interviewers’ questions are often, it appears, as unconventional as Erdogan’s economic policies. "We have put aside orthodox policies, now it is heterodox policies," Nebati told businesses two weeks ago, referencing the 500bp of rate cuts brought in since last September.

The easing sent the lira into a spiral, driving its 2021 losses against the dollar to 44% by the year’s end. Official inflation, meanwhile, picked up to 36% in December (or alternatively you can trust the 83% figure calculated by Istanbul academics).

A senior official from Erdogan's AKP party told Reuters that Nebati took office when the global economy was "in a difficult place" and had implemented new regulations, was working closely with the president and had stemmed the collapse of the lira.

"Some pessimistic comments are being made, and I don't think Nebati deserves this," the official said.

But Nebati is perhaps doing himself no favours given the regularity of his startling statements. Lately he drew gasps of astonishment and derision when he claimed the US Fed is owned by five families. He also said Turkey was now in a "positive vicious circle".

Born to an Arab family from the al-Naim tribe in southern Turkey, near the border with Syria, Nebati studied political science and took a job in the family's textile business. He later served as a board member of MUSIAD, an association of religiously oriented businesses close to Erdogan's government, and became an AKP lawmaker.

A business person who had dealings with Nebati during his time as deputy minister described him to Reuters as an extrovert and a "storyteller" who has little direct economic training.

As a deputy finance minister, Nebati would sometimes stand in for Erdogan son-in-law and former finance minister Berat Albayrak to meet foreign executives looking to invest in Turkey. On one occasion, Nebati "avoided an executive's queries and instead told stories of his childhood," one business person was cited as saying, adding that the executive left without making any investment commitments.

The contention that the ‘Nebati Comet’ is not shedding much light for many of Turkey’s finance industry professionals was last week backed up by a poll conducted by local financial newswire Foreks. More than half of 17 economists approached for the survey declined to provide an estimate on what Turkey’s benchmark interest rate of 14% would be by the end of 2022. Forecasts ranged wildly from 9% to 22%. Ten of the respondents declined to predict when the central bank might revise interest rates next.

EBRD 2022: President says it is supporting wartime commerce in Ukraine and planning for the future

What's behind Belarus' latest troops movements along the border with Ukraine?

While Belarus' latest troop increases along the border with Ukraine have worried many, these actions should be seen in the light of Lukashenko's aim of de-escalating tensions with the West while showing loyalty to Putin.

The war in Ukraine has sent prices for food soaring, and they were already high due to the coronavirus pandemic. Even if peace returns tomorrow, prices for grain are likely to remain elevated for the foreseeable future.