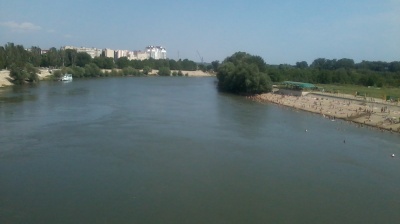 The Dniester river at Tiraspol.
By Iulian Ernst in Bucharest January 14, 2021

Moldova’s President Maia Sandu announced that during her visit to Kyiv she reiterated Moldova’s concerns regarding Ukraine’s plans to build six hydropower plants on the Dniester that flows through the two countries.

Sandu said that she is going to invite the European Union to evaluate the impact of the project, and will approach this topic during the visit she will pay soon to Brussels.

"I expressed concern regarding the situation of the Dniester River and in particular about the proposal to build hydropower plants. I reiterated the proposal to ask the European Union to make an environmental impact assessment, which I will do during my upcoming visit to Brussels," said Sandu.

In April 2019, Moldova asked Ukraine to stop construction works on the river, warning that construction of the six hydropower plants on the Dniester will affect the water level. One of the causes of the floods of 2008-2010 and the drought of 2015 in Moldova was that Ukraine exploits the river basin of the Dniester River, without coordinating its actions with Moldova, according to environmental organisations in Moldova.

The HPP project was promoted in Ukraine by business groups interested in the contracts, rather by the broad economic benefits, environmental expert Ilia Trombitchi of Eco-Tiras NGO in Moldova argued in 2019 when the topic emerged on the bilateral agenda. He also implied that that the project is interesting for money laundering rather than profitable production of electricity.

Ukraine already operates a hydropower plant at Novodnestrovsk. Another hydropower plant on Moldovan territory, at Dubasari, produces 20 times less electricity than the plant in Ukraine — and the six newly proposed HPPs would not yield more than the Dubasari plant, according to Trombitchi.

No agreement has yet been signed on the project, included by Ukraine in its Hydropower Development Programme until 2026, which provides for the construction of six hydropower plants on the upper course of the Dniester. The same is foreseen in the draft Energy Development Strategy of the country until 2035. According to international regulations, such projects require agreement of other countries impacted.

Furthermore, Ukraine needs Moldova’s agreement if it is to build a dam that extends onto Moldovan territory. The negotiations on this topic are dragging on.

Although the Dniester is a cross-border river, Ukraine has not consulted the Moldovan government or the Ministry of Environment on the plan.

Ukraine local bonds are back