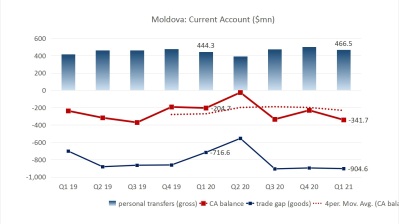 The country's chronic CA deficit (7.7% of GDP over the previous 12 months), has thus returned to higher levels after it temporarily improved during the pandemic. In the second quarter of 2020, the CA gap narrowed to only $25mn.

The figure comes as no surprise, after the statistics bureau, BNS, had previously announced that the deficit of the trade with goods surged by 26% y/y to $867mn. Separately, the GDP data revealed that domestic demand — which generated such wide trade gaps — was mostly (76%) driven by investments (as opposed to consumption), which tones down the concerns related to the outstanding import of goods.

Notably, the rest of the trade deficit was financed through financial instruments and eventually the official reserves of the BNR decreased in the quarter by only $35mn. The balance of the capital and financial accounts revealed inflows worth $357mn in Q1 — up from $214mn in the same period of 2020. A large part of this was debt contracted by local companies, partly from parent groups, which is consistent with the strong investments narrative.

Over the previous three quarters (in the last three quarters of 2020), the official reserves of the BNM had increased by a combined $728mn, as the CA deficit moderated during the first (and toughest) part of the crisis.