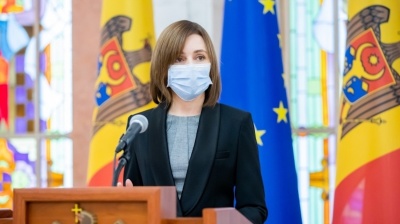 Maia Sandu is seeking an early general election after winning the presidency in 2020.
By Iulian Ernst in Bucharest January 28, 2021

Sandu appointed Gavrilita with early elections in mind and her party, the Party of Action and Solidarity (PAS), has already announced that its MPs would not vote for Gavrilita’s government in a bid to trigger early elections.

Sandu plans radical changes in Moldova, including a shift towards integration with the EU and an overhaul of the judiciary. Despite winning the presidency in 2020, to achieve her agenda she will need an ally as prime minster, something that can only be achieved through snap elections. The current parliament is highly fragmented, and former president Igor Dodon’s Socialists have the largest number of MPs.

The PAS is looking for ways to force snap elections after the Constitutional Court ruled earlier that the lawmakers themselves cannot dissolve the parliament by a simple vote.

“Although Gavrilita would be an excellent head of government, the PAS will not support the vote of confidence, so that, in line with what the citizens of this country want, we can reach the dissolution of the current parliament and early parliamentary elections. Only a new parliament together with the government it invests will be able to do good things for the country and for the people," said PAS deputy Sergiu Litvinenco.

The Socialist Party has not announced whether it plans to vote for the PM-designate. The Socialists might in fact benefit from allowing Gavrilita to form a new government and delay early elections while recovering the ground lost after Dodon failed win a second term in last year’s presidential election, analyst Ion Tabarta argued. Dodon’s loss to Sandu led to the resignation of prime minster Ion Chicu, the ex-president’s former advisor.

Dodon said that he expects Gavrilita to come up with her cabinet, which supports the idea that the Socialists will not support the quick dissolution of parliament by rejecting her without gaining electoral dividends in the process.

Andrian Candu, leader of Pro Moldova, a faction that split from the Democratic Party, also implied that his MPs would support "a technical government headed by Gavrilita" because a general election might be held no sooner than October. Beside Dodon's Socialists, the MPs coordinated by Candu and Ilan Shor's Sor Party may consolidate a fragile, ad-hoc majority to appoint Gavrilita — against the wishes of her own party.