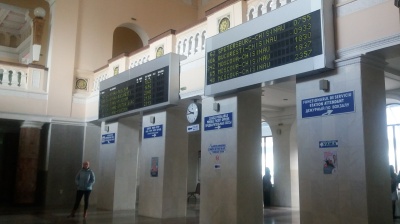 Moldova’s President Maia Sandu summoned the Security Council (CSS) over the situation at Railway of Moldova (Calea Ferată din Moldova, CFM), where the 6,500 employees have not received their wages since November.

Sandu stated, after the CSS, that the management of the company, reportedly close to former president Igor Dodon, should be dismissed.

According to the president, the information discussed at the CSS meeting shows that the situation is dramatic: CFM's management has purposely driven the company to bankruptcy, through corruption schemes, fraudulent acquisitions, fraud and theft in particularly large proportions. Corruption and mismanagement of the company are also the cause of the non-payment of employees' salaries.

"While a group of thieves stole from the CFM company for years, almost 7,000 people did not receive their salaries for more than four months. All this time, the lawsuits [against company’s management] are postponed and the pockets of some are filled with illegal money," said Sandu on April 27.

In March this year, the World Bank’s office in Moldova approached the Ministry of Finance with a note including the proposed reforming of the Moldovan railway sector.

CFM had accumulated, as of March, MDL700mn (€35mn) in commercial debts and MDL92mn unpaid wages.

In order to remedy the situation at CFM, the CSS members agreed on several things that need to be done urgently, starting with a plan for debt rescheduling and prioritisation of salary payments, to be drafted by the Public Property Agency (APP) and presented to the CSS within ten days.

The government should urgently identify sources for the payment of employees' salaries, CSS recommended.

The government should suspend the labour contracts of the CFM management, especially of the interim director of the CFM, Adrian Onceanu, based on the poor performance and poor management, CSS members concluded.

The Public Property Agency should organise a transparent and fair competition for the selection of the new general director of CFM, the statement said.

The anti-corruption prosecution bodies should take the necessary measures to investigate the activity of the former and current management of the company, according to another recommendation drafted by CSS and announced by Sandu after the meeting.