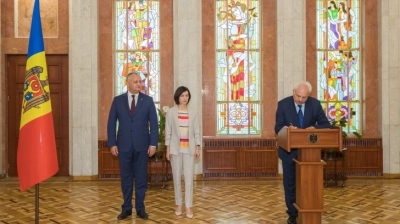 President Igor Dodon with former prime minister Maia Sandu at the start of their short-lived alliance in 2019.
By Iulian Ernst in Bucharest June 19, 2020

Moldova’s pro-Russian President Igor Dodon stressed that his government will remain in office even after it lost majority support in parliament, but also asked for support from his former allies, the pro-EU Party of Action and Solidarity (PAS) and Dignity and Truth Platform Party (PPDA) — despite having pulled his Socialist Party of a coalition with them last autumn in order to replace PAS leader Maia Sandu as prime minister with his own adviser Ion Chicu.

Appealing to the same common ground that brought the Socialists and its unlikely pro-EU partners together a year ago, Dodon argued this is the only way to get rid of the “oligarchs” Vlad Plahotniuc and Ilan Shor.

The last few weeks have seen a series of defections from the Socialists’ current coalition partner, the Democratic Party that was led by Plahotnuic until he fled the country last summer, to Pro Moldova, a new political vehicle headed by former parliament speaker Andrian Candu, who is Plahotnuic’s godson.

This has led to intense speculation that Plahotnuic is preparing the ground for a return to Moldova. The businessman and politician exercised a high level of control over state institutions including the judiciary, leading to warnings including from the European Commission of the rise in state capture in the small Southeast European country.

He was ousted in mid-2019 when Dodon’s Socialists and the two pro-EU parties unexpectedly joined forces and installed a new government under Sandu.

However, their cooperation proved to be short-lived, as Dodon managed to improve his position vis-a-vis his less experienced new partners. A public disagreement over the appointment of a new chief prosecutor provided the opportunity for the Socialists to withdraw their support for Sandu and create a new government with the Democratic Party, that had — publicly at least — distanced itself from Plahotnuic.

The call launched by Dodon comes at a time when the pro-EU parties are negotiating, though not very successfully, with the Pro Moldova party.

Shor, “the visible beneficiary of the $1bn bank frauds” as defined by Kroll Report into the frauds, has own political vehicle, the SOR Party. Both Pro Moldova and the SOR party have welcomed MPs who defected from the Democratic Party that claims (not very convincingly) it has no longer anything to do with Plahotniuc.

In a Facebook post, Dodon says that he is ready to start negotiations with the PAS and PPDA.

"I am equally ready to support either the current government or a new government that would include PAS and PPDA if these parties feel truly prepared to take responsibility in managing the current health and economic crisis,” he wrote.

Indeed, this is not just a political crisis. Moldova’s coronavirus figures are deteriorating with the number of new cases above 300 per day and the number of active cases (5,400) already 50% above the pre-relaxation peak. With a very small number of tests run, the situation risks getting out of control.

"I want to point out that the lack of a sufficient number of votes for the current parliamentary majority is not yet a political crisis and destabilisation, because the current government will continue its work anyway and will do everything necessary for people in this time of crisis, even in the absence of a stable political majority, if this is to be achieved,” the president said.

Dodon argued that the “good” political forces in parliament should not allow the Plahotniuc-Sor-Candu group of oligarchs to gain control and “take the country hostage again”.

“Today, everyone understands that the deputies that moved to Pro Moldova are the people of Plahotniuc and Shor, bought with money from the stolen billion, and any coalition with these defectors or with the Candu-Shor groups means a coalition with Plahotniuc's interests and scenarios,” Dodon warned, most likely directing his speech at the pro-EU parties. However, he will struggle to convince them to work with him again after the experiences of the last year.

Meanwhile, Plahotnuic remains in exile, and is believed to have recently left the US — where the Moldovan General Prosecutor's Office sent an extradition request earlier this month — for Argentina, according to unofficial sources quoted by Jurnal TV channel.

"A source who previously told us that Plahotniuc holds another identity as well under the name of Novak [information officially confirmed] told us that he is no longer in the US, that he left for a Latin American state, [most likely] in Argentina," said Jurnal TV anchor Alex Cozer.

Speaking on the same TV show, Candu, said that the former Democratic Party leader had no reason to leave the US. However, he said he had not spoken with Plahotniuc over the past ten days.

Plahotniuc asked for political asylum in the US last autumn, but the arrest warrant issued by the Moldovan authorities might put an end to his attempts.