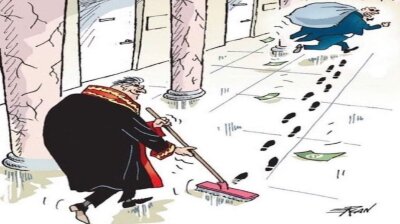 President Recep Tayyip Erdogan has the right to extend the law by one-year in two six-month increments.

The law allows individuals and companies to repatriate previously undisclosed cash, gold, FX, securities and other assets held abroad, or declare assets held in Turkey, without facing any questioning on the source of their assets or incurring a tax penalty.

Previous versions of the law imposed a small tax penalty on disclosed assets. The current law is applied with no levies at all.

Assets can even be carried into the country in a suitcase and declared with no inquiries then posed as to their origins.

“Considering that money laundering requires committing other crimes such as in drugs, terrorism, etcetera, and waiting for an opportunity to enter the system to be cleared, this risk is important,” Transparency International Turkey chairman Oya Ozarslan told Aljazeera.

“Today, if someone comes to the border and claims to have brought €30mn, all they have to do is fill out a form for the public prosecutor and the Financial Crimes Investigation Board [MASAK],” Nedim Turkmen of Galatasaray University told the media outlet.

He also noted that under the current legislation, a person can deposit money in a Turkish bank one day and withdraw it the next to cleanse it of any criminal affiliations.

What bothers Turkmen most is that this regulation is not only aimed at bringing in assets from abroad, it also allows unregistered assets already in Turkey “which might be obtained illegally, especially via graft, tender rigging, etcetera, by bureaucrats and government officials to be whitewashed.”

“In a further blow to transparency,” the amount of wealth declared under the amnesty is not made public.

“We don’t know how much wealth was legalised as a result of the recent amnesties and regulations,” the Republican People’s Party (CHP) MP Erdogan Toprak told Aljazeera. “How much money, gold, jewellery, and other valuables were brought into the country? The total value of the assets is no longer available to public.”

All of the wealth amnesty laws initially became effective for a six or three-month period before being extended.

The first became effective in November 2008 and ran to the end of 2009. More than Turkish lira (TRY) 47bn of assets were registered but the actual inflow was around TRY30bn, generating TRY1.5bn in tax revenue. A 5% tax on domestic assets and a 2% tax on assets from abroad were applied.

The second wealth amnesty became law in May 2013 and expired at end-October 2013. A total of TRY70bn worth of assets and funds were declared but the actual inflows remained at TRY 11bn. Declared assets were subject to a 2% tax, bringing TRY209mn in tax revenue.

The third amnesty took effect in August 2016 and ended at the end of June 2017. No tax was applied.

In 2016, a Deutsche Bank report entitled “Dark matter: the hidden capital flows that drive G10 exchange rates” noted significant financial inflows into Turkey under the net errors and omissions item in its balance of payments (BoP).

The Turkish government solved this problem in 2019 by revising its BoP methodology. Currently, there are no eye-catching inflows under the net errors and omissions. These inflows were retrospectively transferred under the service income item.

Turkey has long seen heroin trafficked across its borders from Afghanistan into Europe, as well as people and arms, Aljazeera noted.

Billions of dollars from illegal enterprises in these areas often end up in offshore accounts. Critics suspect some of it finds its way to Turkey via the country’s wealth amnesties, according to Aljazeera.

The country’s latest amnesty comes amid growing concern that foreign gangsters are increasingly basing themselves in Turkey, according to Aljazeera.

Headlines focused on murders and armed clashes involving foreign mafia groups, particularly in Istanbul, are routinely splashed across newspapers in the country.

“These are actually assets stolen from the country and its people by government-allied companies and individuals who transferred their billions of dollars of wealth into tax havens,” Peoples’ Democratic Party (HDP) MP Garo Paylan told Aljazeera. “Corruption, nepotism, graft, and tender rigging were used to obtain them. The ruling Justice and Development Party [AKP] is attempting to whitewash those illicit assets because it knows it will be voted out soon.”

“Independent international institutions should be more vocal about these issues,” an unnamed senior official in Turkey’s finance ministry, speaking on condition of anonymity, added.

“I really stopped counting the number of these amnesties. Enough is enough,” he added.

Unnamed officials of the current administration complaining to foreign media publications about the country’s money laundering “services” add to growing signs of conflict among the gangs that exist under the Erdogan regime.

Qatar-based Aljazeera, which played a big role during the "Arab Spring" period in 2011, is a broadcaster that some critics have often claimed the CIA attempts to bring under its sway.

DON: Blunting the Javelin? – The prospects for Nato participation in a Ukraine-Russia war

What will Nato offer to Ukraine? Probably a Javelin missile resupply

The conscripts, generally Tajikistan’s poorest young men, are brutalised into service. And they are the country’s first line of defence.