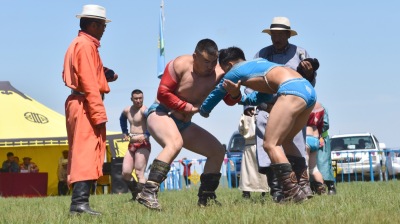 Mongolians have been wrestling for around 7,000 years or more. The sport will this year, however, endure another harsh blow with the annual Naadam festival cancelled for a second time in a row because of the Covid crisis.
By Antonio Graceffo & Dandar Jamsran in Ulaanbaatar July 5, 2021

Mongolia's most important annual festival, Naadam, has been held every year for the past 800 years, but it has been laid low by the coronavirus pandemic for the second year in a row. Naadam was cancelled on July 2.

The news will come as a bitter blow for Mongolians, not just because the event is a major tourist attraction that earns the country millions of dollars a year, but mainly because it has become deeply engrained in the country’s culture. The first Naadam was commissioned in 1206 by Genghis Khan. The festival has been held almost every year ever since. Mongolians from across the country travel to the capital of Ulaanbaatar to celebrate, meet relatives and compete in the “Three Manly Games.”

The mid-July festival, which in 1922, became an official holiday, has three main components: Mongolian Bökh wrestling, archery and horseracing, of which Bökh wrestling is by far the most revered. 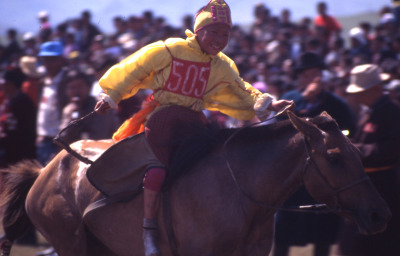 In 2020, Naadam was threatened by COVID lockdowns, with the government finally deciding to go with a virtual Naadam. The national games and ceremonies were still held in the capital, but the audience was resigned to watching the events on TV, rather than attending live. This year, Prime Minister Luvsannamsrain Oyun-Erdene has taken the painful decision to cut the festival completely because of the dire virological situation in the country.

In 2020, outside of the capital, in the aimags (provinces) and soums (counties), Naadam was held more or less as it always has been, with nearly the entire population turning out, largely in traditional dress, to support their cultural heritage and cheer for their heroes. This year, however, numerous provinces are under lockdown, making it impossible for wrestlers in some parts of the country to train, and the government has ordered all of the local games to be halted as well.

While roughly half of the country’s population lives in the capital of Ulaanbaatar, most have their roots elsewhere and many would return to the province or soum where they grew up, to spend the holiday. This year, however, internal travel restrictions have complicated the movement of people from the capital to the countryside, and vice versa. Some people are also avoiding travel for fear of getting stuck due to a lockdown being imposed during their trip. 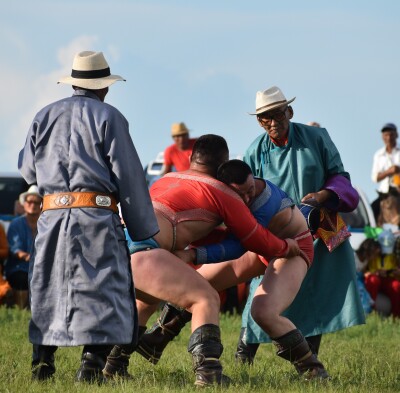 Choijiljav Kh assistant wrestling coach at the Mongolian State University of Physical Education (MSUE) said, “Just watching Naadam on TV, there’s no feeling. It’s just more TV.” Comparing this year with last year, he said, “This year, there is no soum Naadam, no aimag Naadam, and many lockdowns in the provinces.”

For the wrestlers, the loss is much more than a question of having an audience or not. Naadam is a single-elimination tournament with a 5-round winner receiving the title of “hawk”, 6 rounds “falcon”, 7 rounds “elephant”, 8 rounds “garuda”, and 9 rounds “lion”. These titles carry a tremendous amount of prestige with them. Aside from receiving money from prizes and sponsors, holding a highly-respected wrestling title can be life changing, catapulting a wrestler to success in business or politics. Examples include Mongolia's former president Khaltmaagiin Battulga, who was a wrestling, judo, and sambo champion, and Badmaanyambuugiin Bat-Erdene, who won 11 national level tournaments in Naadam, and later ran for a seat in the State Great Kuhral (parliament).

The Naadam games, are supposed to be held from July 10-12 and are the culmination of a year-long cycle of preparation. Sagan Tsar, Mongolia’s Lunar New Year, celebrated in February, is among the most important wrestling events of the year, and serves as a tune-up for Naadam. For two years in a row, however, Sagan Tsar wrestling competitions have also been cancelled.

Dandar Jamsran, the coach of Ulaanbaatar’s 73 secondary school, the wrestling high school, says, “Wrestling has basically become a professional sport now, which is why wrestlers need to be training every week.”

COVID lockdowns changed everything. Most competitions, during the past year and a half, have been cancelled, meaning wrestlers lost the opportunity to gain experience and to earn a living. “They tried to find different ways to work, this year” said Dandar. “They did some showcases and exhibition matches with sponsorship.” But in Dandar’s estimation, it was a far cry from the normal schedule of training and competition.

“There were only two Bökh wrestling events during the whole winter, but they were not like real tournaments but rather like a show,” explained Dandar. “Some Bökh wrestlers even earned money by fighting in other competitions, such as judo or freestyle wrestling.” Some international sports competitions took place during the lockdowns, so athletes in these other sports were not hit as hard as the Mongolian traditional wrestlers.

The inactivity has not only impacted the athletes financially, but also in terms of lost skills. “From my observations the skills, techn,ques, reflexes, level of endurance and tenacity have all gone down.” observed Dandar.

In mid-May, the government lifted the strictest lockdowns and it looked as if Naadam might happen after all. “In a normal year, the wrestlers move into training camp in a ger (yurt) usually about 35 days before Naadam, but there is no set date. It depends on the weather,” explained Dandar. This year, however, Mongolia experienced an unusually long winter, with snow still falling, the first few days of June. It wasn’t until about June 18 that it was warm enough to begin training outdoors, but within days, the government announced a newer, stricter lockdown was coming, because of rising coronavirus cases. Consequently, the combination of COVID lockdowns and bad weather had hit wrestling even harder than in 2020. 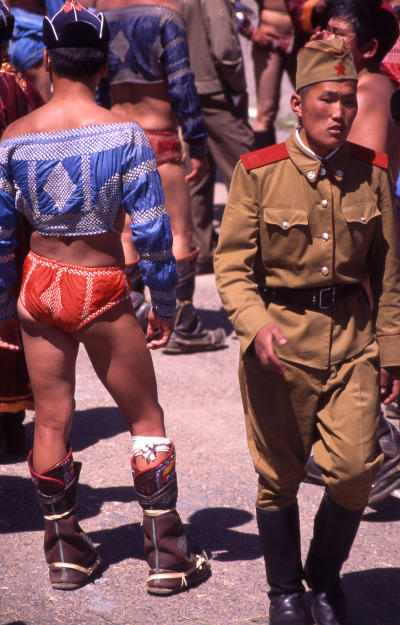 Every nation has its sport passions, but wrestling is an integral part of the Mongolian cultural identity. One of the oldest wrestling images on the planet Earth is a cave painting in the Bayankhongor Province of Mongolia dating back to 7000 BC. It depicts two naked men grappling, surrounded by a crowd. This suggests that not only did the prehistoric Mongols wrestle, but that wrestling was already practiced as a spectator sport.

The reason the tradition has carried on for thousands of years, according to Damdinbazariin Ganbold, who is both a medical doctor and a master of sport in wrestling, is because, “Mongolians lived as nomadic herders. The environment cultivated Mongolian Bökh wrestlers. Riding horses, catching animals and controlling them on the ground all related to wrestling.”

Herding is not for the weak. “The nomadic lifestyle is harsh. You have to cut fire wood, break the ice to get drinking water, and carry the water back to your ger. Agriculture and Bökh, go hand in hand; hunting, killing mountain lions, wild animals, and panthers. Mongolian Bökh, is basically a fighting sport.”

Ganbold explained that not only did the hard work of herding built up the bodies of the young Mongolian boys, but much of it correlates directly with wrestling techniques. “When the baby horses are drinking you have to hold them in place and control them. Sometimes, you must grab a camel by the nose, wrestle it to the ground and pin it. That is also wrestling. When you throw a lasso and pull on the rope until the animal falls down. This is like practicing a seonagi (shoulder throw).”

He summed it all up in a single sentence. “Agriculture made Mongolian Bökh.”

Even before the COVID restrictions, Mongolian Bökh was already facing challenges as more and more of the population has given up their herds and moved to the cities. Today, only about 40% of Mongolians are herders. Ganbold dismissively referred to those born in the city as “apartment boys” saying that without the hard work and experience of herding, they would be, “as weak as orphaned lambs.”

According to Nyambold, former captain of Mongolia’s junior national judo team, further pressure is being exerted on Mongolian traditional wrestling by international sports, which are gaining popularity among young people. “Judo and freestyle wrestling are getting much more popular because of the Olympics. The kids know they can win international medals. But with Bökh wrestling, they can only compete inside of Mongolia.” Additionally, with no weight classes in Bökh wrestling, smaller athletes see themselves as having a better chance in the international sports.

Two years of COVID lockdowns and an unusually cold winter have dealt a harsh blow to Mongolia’s oldest and most prestigious sport. Urbanization and globalization are also gnawing away at the fundamental source of Mongolia wrestling power. Despite the setbacks, Bökh wrestling is not going away. Bökh is as hearty as the generations of Mongolian warriors and steppe’s herders who made it. The Bökh community will continue to train and compete, as covid restrictions allow, and hopefully be back to normal in 2022.

bneGREEN: China’s promise of no overseas coal financing could free up $130bn for green investment

Russia’s Team Spirit has triumphantly lifted the Aegis of Champions. The team of five youngsters – the oldest of them only 23 years of age – has won $18.2mn, the biggest prize in eSports.

After ranking second in the EU two years ago, production has now sunk back amid rising costs and legislative hurdles.