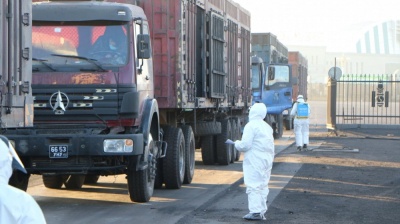 Thousands of trucks are stranded at the border.
By Anand Tumurtogoo in Ulaanbaatar December 1, 2020

Mongolia went into lockdown on November 12 after, for the first time, the country recorded community transmissions of the virus. On November 23, the number of trucks transporting Mongolian coal into China via the Gashuunsukhait-Gantsmod landport entry in South-Gobi dropped to 211. Two days later, the daily total making it past the tightened customs health clearance process fell to less than 20. The situation was reportedly exacerbated by some drivers who were caught forging test results.

Gashuunsukhait-Gantsmod accounts for more than half of Mongolia's coal exports. Currently, the Tavan Tolgoi-Tsagaan Khad route into China is operating normally. However, short-haul transportations from Tsagaan Khad to Gashuunsukhait are subject to delays.

The Gashuunsukhait border customs agency has approached the Mongolian government and major coal mining companies in a bid to expedite the setting up of a polymerase chain reaction (PCR) test lab.

More than 3,000 coal and other trucks are said to be stuck at the border. Drivers have complained of having to pay out of their own pockets for temporary lodgings and testing for coronavirus. Many have requested permission to turn back from the border and return home, but with Mongolia on lockdown and travel through its regions restricted, their requests were refused.

Mongolia’s Mining Minister Yondon Geleg, meanwhile, has issued an order to mining organisations and officials to provide rapid testing for mining employees and to create safety zones at the main mineral export ports.

In September, the Asian Development Bank (ADB) updated its 2020 growth forecast for Mongolia to a contraction of 2.6%.

Mongolian Finance Minister Khurelbaatar Chimed was actually boasting in early September that Mongolia had exceeded the 2,000-coal-trucks-per-day threshold as regards exports to China. That progress has clearly come to a grinding halt.

The Natural Resource Governance Institute has predicted that if Mongolian coal exports face substantial obstacles, heavy pressure will be placed on the state budget. In its report on coronavirus impacts in Mongolia, it stated: “Any new reduction in exports, coupled with the government’s fiscal stimulus, could put exert significant pressure on the balance of payments and the $3.6bn in foreign reserves may quickly dissipate as the central bank tries to keep the Mongolian tugrik afloat.”

Mongolia this year has entered a period in which it must make significant bond repayments.

A swap agreement between the central banks of China and Mongolia was scheduled to end in 2020. In August, the two parties came to an agreement that the swap agreement, based on a Chinese yuan renminbi (CNY) 15bn ($2.2bn) loan, would be extended to 2023.

On November 25, Mongolia’s parliament and the All-China People's Congress convened digitally. Mongolian lawmakers requested that, given the coronavirus crisis, the Chinese cancel or reduce debt owed by Mongolia under the swap agreement. Mongolia has paid a total of CNY4.4bn in interest to China on the debt and it is expected to pay CNY594mn in interest in 2021.

As of November 25, Fenwei Energy's Mongolian washed coking coal price index rose 20 yuan to 1,080 yuan per tonne from a week earlier. The price of raw coal rose by 20 yuan to 880 yuan.

Bloomberg reported: “There is also a shortage of coking coal in China. Leading companies in Shanxi Province, China's leading coking coal producer, have raised the price of low-sulfur coking coal by CNY 70-100 per ton, SXCoal reported. Strict regulations on the safety of coal mines in Shanxi Province will be implemented from December 1. As a result, there are fears that supply may decline in the near future.”

China is sticking to its ban on importing Australian coking coal, with the political rows between Beijing and Canberra unresolved. Chinese buyers now very much rely on US and Canadian supplies, but the supplies are limited compared to what Australia used to provide.

Given vulnerabilities in the coal supply chain, China has the incentive to keep the flow of transportations of available coal into the country as smooth as possible. Mongolia needs to address its worsening coronavirus difficulties as promptly and efficiently as it can to ensure that the economy does not pay an unnecessary price.