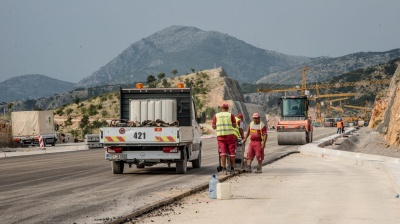 Montenegro has asked the EU for help to repay a loan to China’s Exim Bank, taken out for the construction of the first priority stretch of the Bar-Boljare motorway, Deputy Prime Minister Dritan Abazovic told MPs on March 26.

Podgorica borrowed heavily for the first stretch of the motorway from Smokovac to Matesevo, and Abazovic believes it should be repaid to reduce the Chinese influence in the country.

Back in 2018, Montenegro was listed as one of eight countries at rising risk of debt distress after taking out Chinese loans extended under the One Belt One Road Initiative (OBOR), according to a study by the Washington-based think tank the Center for Global Development.

The huge cost of the motorway – estimated to be the most expensive road per kilometre in Europe because of Montenegro’s mountainous terrain – in comparison to the country’s tiny economy previously rang alarm bells among international financial institutions and rating agencies.

The cost of building the Smokovac to Matesevo stretch of the motorway will amount to €895mn, up by 10% from initial estimations, Montenegro's then transport minister Osman Nurkovic said in July 2019. To pay for the construction, Montenegro signed a loan deal with Exim Bank for around €809mn in 2014. The loan has 20-year repayment period, five years grace period and a 2% fixed interest. Podgorica started drawing funds in 2015.

The previous government increased fiscal discipline in an attempt to prevent a hike in public debt, with Exim Bank as the largest creditor. However, it relaxed the measures at the beginning of 2020, only to come under intense pressure with the start of the coronavirus (COVID-19) pandemic. Its economy is among the worst affected in emerging Europe by the pandemic due to the collapse of its tourism sector, which typically contributes 25% of GDP.

“When asked by the vice president of the European Parliament, I said that they should help us if they want to reduce the impact, so that our budget is not so dependent on one debt,” said Abazovic in response to a question from Branko Radulovic of the Democratic Front, part of the ruling coalition.

"We have come to an unenviable position, because we are not in the EU, and we must ask for financial support so that we can service the budget," the deputy prime minster added, reported local news agency Mina.

Abazovic also pointed out that the construction of the motorway does not end with the first section; two more sections need to be completed for the project to make sense.

“With what money should we do that, when a third of our debt is a Chinese loan. You are talking about the indebtedness of the new government of €750mn, and €500mn is needed to repay the debt that was accumulated by the previous government,” he said.

The loan was taken out by a previous government, led by current President Milo Djukanovic, who ruled the country for more than three decades as either president or prime minister for most of that time.

Abazovic denied the current government has a negative attitude towards China, saying that China “gave us a chance” and that the previous government was responsible for taking out the loan.

However, he added that the highway is not being built according to plan, saying that new arrangements with the Chinese side and new funds are necessary, reported Mina.

The government led by Prime Minister Zdravko Krivokapic has decided to sue China’s CRBC, which is building the stretch, for devastating the UNESCO-protected Tara River. CRBC is charged with breaching the law, building a facility without measures for environmental protection and not in line with the adopted project for the construction, which has caused significant environmental damage across a significant area.

"The same company in Croatia is building the mainland-Peljesac bridge and breaking all deadlines in a positive sense, and in our country the completion deadlines are being broken 22 times ... Who will be responsible for that?" Abazovic asked.

US warns Belarus to keep its commitment to neutrality
2 hours ago
US Secretary of State Blinken in Kyiv, warns Russia could attack “at very short notice”
4 hours ago
Defence agreement between Slovakia and the US divides politics and society
16 hours ago
Uzbekistan launches production of military drones
22 hours ago
New impetus between Bulgaria and North Macedonia at top-level Skopje meeting
1 day ago