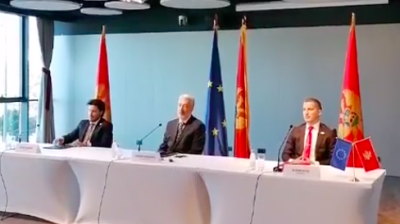 Montenegro’s main opposition coalitions announced a broad coalition that will give them a majority in the new parliament. / Democratic Front
By Denitsa Koseva in Sofia September 9, 2020

Montenegro’s main opposition coalitions that are entering the next parliament announced on September 9 they have signed a historic agreement to form a broad coalition that will have a majority to form the next government, ousting the Democratic Party of Socialists (DPS) that has ruled for three decades.

This is the first time in Montenegro’s history that all opposition parties managed to set aside their differences and unite, leaving the DPS with no chance to form another government. The three coalitions have 41 seats in the 81-seat parliament.

The DPS took 35.06% of the votes in the August 30 election, just ahead of its main rival, the pro-Russian and pro-Serbian coalition For the Future of Montenegro, with 32.55%.

For the Future of Montenegro has now struck a coalition agreement with other opposition parties that will be represented in the new parliament.

According to the agreement between For the Future of Montenegro, Peace is Our Nation and Black in White, published on Peace is Our Nation’s Facebook page, the three coalitions have agreed that the country will continue reforms necessary for its EU membership and strengthen its alliances with Nato members.

The coalition has also agreed to clear all key state institutions from political influence in order to carry out an effective fight against corruption and organised crime.

The coalition agreed that it will not take revenge or pursue its political opponents and pledged to secure access to the ruling coalition to the parties of ethnic minorities even if they have not passed the threshold to enter parliament.

Montenegro’s President Milo Djukanovic, who is also the leader of the DPS, previously admitted his party might go into opposition and said he was ready to work with the new government no matter which parties participate in the new ruling coalition.

The DPS’ popularity suffered as a result of the months-long crisis provoked by the adoption of the controversial law on religions at the end of 2019, which led to protests, rallies and escalating tensions with Serbia and the Serbs living in Montenegro.

The church law, according to its critics, may strip the Serbian Orthodox Church of hundreds of religious sites in Montenegro, including medieval monasteries and churches.

Majority of Montenegrins want early election to exit political crisis, poll shows
European Parliament calls for ‘reenergised’ enlargement process – but only for countries that back Russia sanctions
Ukraine faces one of worst declines in GDP from a war, says EBRD