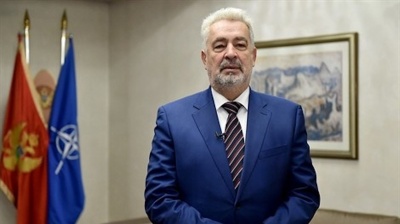 PM Zdravko Krivokapic made an extraordinary statement late on February 16, saying the government is determined to respect the rule of law and all international agreements.
By Denitsa Koseva in Sofia February 17, 2021

The existence of Montenegro’s ruling coalition is in question as one of its biggest parties, the Democratic Front, said it will no longer support the government after Prime Minister Zdravko Krivokapic decided to withdraw proposed changes to the criminal code that would scrap the special prosecution and pave the way for the dismissal of its head, Milivoje Katnic.

Katnic led the investigation and trial against several leaders of parties in the current ruling coalition, who were charged with plotting a coup against the then ruling Democratic Party of Socialists (DPS) back in 2016. His work led to guilty verdicts for 13 people, including Democratic Front leaders Andrija Mandic and Milan Knezevic.

The rift appeared just two months after the new coaliton came to power, ending 30 years of rule by the DPS. Since taking office in December, the new government has sought to remove Katnic, while on February 5 the Appeal Court cancelled the verdicts in the coup plot case, citing significant violations of criminal procedure.

However, the head of the European Commission delegation to Montenegro Oana Cristina Popa has raised concerns about the judicial reforms under the new government, saying Podgorica must “advance and not reverse the implementation of the judicial reform”.

Late on February 16, Krivokapic made an extraordinary statement, saying the government is determined to respect the rule of law and all international agreements, including those signed with the EU as part of the membership talks.

Krivokapic argued that the amendments to the criminal code are necessary as the special prosecution lacks effectiveness and because the majority of people believe the institution does not work well, pointing to recently revealed corruption cases.

“But! There is always this ‘but’ we have to pay attention to! Our obligation when adopting systematic laws concerning the rule of law … is to consult with our partners. This means we should have wider discussions, include the EC’s experts and respect the opinion of the Venice Commission,” Krivokapic said in the statement.

“We do not want to go the wrong way,” Krivokapic explained.

He added that the government is determined to lead Montenegro towards EU membership, which is also the desire of 75% of the population.

“We bet on the European values and standards and we accept them, we shall very quickly get onto the European Union’s doorstep! And if we deny them, and our partners have very clearly told us that with the adoption of the laws in this way we are crossing the red line, this means that, while in reports until now the key word has been ‘stagnation’, in the next one this word would be ‘regress’,” Krivokapic wrote.

The Democratic Front was angered by his decision and its leaders said they will no longer support any decisions of the ruling majority until the legislation changes are returned to the parliament’s agenda.

At a press conference broadcasted on the party’s Facebook page Mandic and Knezevic said they would not even back the 2021 budget.

“A crisis of the parliamentary majority has been caused. Today, the coalition For the Future of Montenegro [which is led by the Democratic Front] we decided that our club, which is the absolute majority, will not participate in any consultations until the laws on the prosecutor's office are put back on the agenda, as agreed in the parliament,” Mandic said.

However, the Social Democratic Party (SDP), which is also part of the ruling coalition, welcomed Krivokapic’s decision.

Since its formation, experts have expressed concerns over the ruling coalition’s stability as it comprises 20 parties with often conflicting views, from the pro-Russian Democratic Front to liberal and pro-EU coalitions, which were united behind the common goal of removing the DPS after three decades in power.

Modest recovery in prices of new apartments in Montenegro in 4Q20

BRICKS & MORTAR: Renovation of apartment buildings has biggest potential for energy saving in Western Balkans
Grey economy almost a third of GDP in Bosnia, Montenegro and Serbia
Modest recovery in prices of new apartments in Montenegro in 4Q20