MOSCOW BLOG: Are regular Russians ready to face the police baton to get what they want? 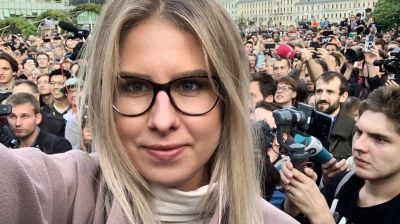 Lawyer Lyubov Sobol is a would-be candidate for the Moscow city government and emerged as a leader in the recent protests.
By Ben Aris in Berlin August 2, 2019

Has the brutal beating of protestors in Moscow last weekend and the arresting of over 1,300 people—some simply innocent passersby—radicalised Muscovites? The crowd size at the sanctioned August 3 rally will be very telling.

The number of demonstrators that turn out to march on Sakharov Avenue will serve as a barometer for the mood amongst Muscovites and also indicate the success or otherwise of the Kremlin’s tactic to scare would-be revolutionaries away by making it clear that they will be beaten by truncheon-wielding police should they attend unsanctioned rallies. 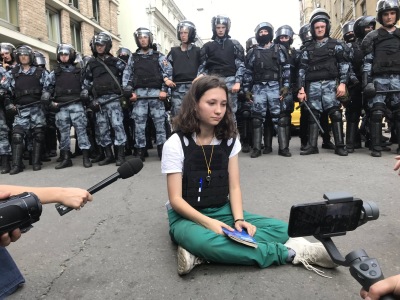 As bne IntelliNews has argued, by sanctioning this weekend’s rally the authorities are hoping to de-escalate the tensions by allowing protestors to blow off some steam.

But it is nevertheless a concession and the authorities are being forced to sanction more and more of these rallies. Last summer was marked by a string of rallies in Russia’s regions organised by anti-corruption blogger and opposition activist Alexei Navalny. They saw thousands turn out to protest against the government’s heavy-handed tactics and the austerity Russians have been enduring for the last six years.

Moreover, while in the past the authorities sent in the OMON riot police to break up any unsanctioned rally in Moscow, last summer many of the rallies were not sanctioned by regional authorities but were allowed to happen anyway.

It’s clear that president Vladimir Putin’s tight grip on popular politics is slipping. Several high-profile celebrities came out publicly in support of the protestors, which in “Putin’s Russia” is unusual, as it is bad for your career. And the protests have created some new political figures, particularly lawyer Lyubov Sobol, who is a would-be candidate for the city government.

“I’m ready to take [incumbent Moscow mayor Sergei] Sobyanin’s rating with me to my grave,” Sobol told a recent meeting with the authorities.

Outspoken press
Likewise the local press has been outspoken. A month ago, three of Russia’s leading newspapers ran identical covers declaring “I/We are Ivan Golunov” after an investigative journalist was arrested on trumped up drug charges. The move contributed to pressure that forced the authorities to back down and drop the charges.

This week well-respected RBC (aka RBK) newspaper published a brave cover the Monday following the violent clashes: a full page with nothing but the number 1074—an estimate of the total number of people arrested—as a cut to a photo of a man being manhandled by police. 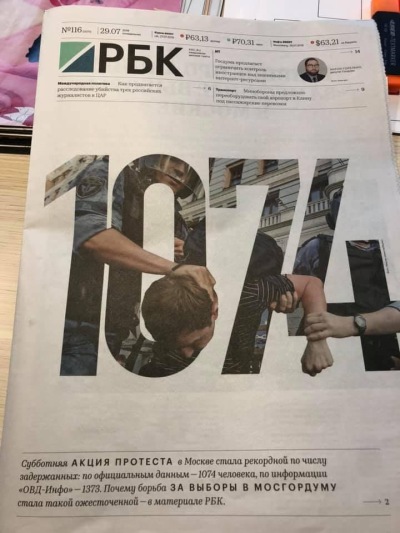 The defiance shown towards the Kremlin is clearly becoming bolder. That is probably why last weekend’s police reaction was so brutal. As Sam Greene, director of the Russia Institute at King's College London, argued, in addition to attempting to contain future protests with the threat of violence, Putin also needs to reassure the Kremlin elite that he is still in control and willing to do what it takes to prevent a regime-changing “colour revolution” in Russia.

And that is where things might go wrong. The thing with popular protests is that at some point the population become radicalised to the point where ousting the government or president becomes more important to them than avoiding being hit on the head with a police baton.

The Former Soviet Union (FSU) has seen many instances of this sort of protest, most famously in Ukraine, but also in Armenia during its velvet revolution last spring, in Georgia’s Rose Revolution and Kyrgyzstan’s Tulip Revolution. More recently Georgia saw fresh protests, prompting the increasingly unpopular Georgian Dream government to use force and tear gas and rubber bullets against its own people for the first time. And the Balkans have been swept by a string of protests since the beginning of the year.

In general it is clear that the population of the entire FSU patch are politically maturing and increasingly prone to holding their governments to account. And more importantly they are willing to face that police baton.

The numbers will count
Has the Kremlin miscalculated? At the last sanctioned rally two weeks ago 20,000 people turned out. At the following unsanctioned rally 10,000 showed up, a figure approximately five to 10 times bigger than the size of the crowd usually attracted by the typical politically motivated rally organised by the likes of Navalny.

Ten thousand who are willing to face the baton is already a significant number for Russia, although a very small number in comparison to Moscow’s population of circa 15mn.

How many will turn out this weekend? If the same 20,000 come as came two weeks ago that would be a serious challenge to the authorities, but would also suggest that the protests are limited to a committed minority even if it is growing steadily in size. Should say 10,000 show up then that would suggest the batoning of protestors and the subsequent harassment has been effective.

Authorities have spent the last week calling on the homes of participants with forms to sign, threatening them with prosecution if they attend more rallies.

However, if say 50,000 people show up then the authorities are in trouble as this would suggest the Kremlin has missed the mood of a population becoming radicalised in the way the Ukrainians, Armenians and Georgians were.

The opposition tactics going forward are clear: hold a rally every weekend between now and the September 8 city council elections that are at the centre of this dispute. But for the opposition to succeed, big crowds are required. The size of this weekend’s crowd will provide a good measure of the temperature of society.