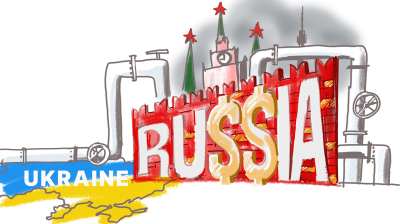 The West is getting into an energy war with Russia, but how badly can it actually hurt? And will Ukraine take advantage of the billions it must spend on reconstruction to invest into green energy production? It could become a green energy powerhouse that will solve a dozen problems at once. / wiki
By Ben Aris in Berlin June 10, 2022

I released the last two of my “the Fourth Russia” series today, looking at the coming energy wars (buckle up, people, as it has not really started yet) and also a wishful-thinking piece where Ukraine embraces the opportunity afforded by a future Marshall Plan to become Europe’s green energy powerhouse. It could happen and it is an obvious thing to do with the billions that will be eventually spent on it.

I won’t go into the details of the energy war pieces, but I have to confess that I’m very pessimistic about the prospects for success for a number of reasons.

First is that money talks. At the moment everyone has their back up because of the killing in Ukraine, but as soon as that dies away commercial considerations will slowly take over again. It’s a given that these sanctions will not come off for decades, but even before they started Shell was caught mixing 49% of Russian petrol with 51% of Latvian petrol and calling it “the Latvian blend” in an effort to dodge sanctions. Given that the result of sanctions means you can buy Russian oil at a 30% discount to regular oil then insane amounts of money are available to anyone willing to play this game.

More generally, the sanctions will create a two-speed market that attempts to treat Russian oil differently from other oil. Oil is the quintessential commodity and yet the West is convinced it can break this ancient market into two parts with different prices for the same thing, Really? I know that other markets like Iran have had sanctions put on them successfully, but Russia is a different kettle of fish.

One of the reasons that make me think this is the market is not just the West. The sanctions have been imposed by the West but the reception in the rest of the world is lukewarm at best. Russian President Vladimir Putin said yesterday that “we will have pivot to Asia” and that is what he will do. And to willing customers. Just how far, fast and well this effort goes is what we will be writing about for the next five years.

And pivoting to Asia was actually going to happen anyway. Russia’s European energy business was doomed anyway. When former German chancellor Angela Merkel was in Moscow to say goodbye to Putin she also said that Europe would stop importing Russian gas completely in the next 25 years thanks to the Green Deal. Asia is where the growth is and its collective GDP is already bigger than the developed markets. However, making a switch like this for the whole energy infrastructure will take at least a decade. Russia should have been able to manage the process easily, but now it has to be done overnight. That will cost, but in five years’ time it will start bearing fruit and Russia’s energy business will recover.

In a similar vein Ukraine’s green revolution is not a pipedream, as even before the war the renewables sector was the only bit of the economy that attracted any foreign direct investment (FDI) at all, a whopping $5bn. That should restart as soon as the shooting stops, as Ukraine is extremely well suited to solar and wind power generation; it's flat, sunny and has acres of free land.

The wishful thinking on my part is it embraces hydrogen production. There is no way of getting round the need for some sort of hydrocarbon fuel to deal with the baseload problem. Gas was going to be the answer but that is not an option now, so the neat dodge is to turn the gas into green hydrogen (made from electrolysis using solar power).

Not only can Ukraine start doing this straight away; it also gives a new lease of life to its massive pipeline and storage facilities.

The more controversial bit is that Ukraine could even buy gas from Russia to use as feedstock (in addition to the 20bn cubic metres it produces of its own, which gets the hydrogen business started). This is not as crazy as it sounds, as I think people will slowly wake up to the realisation that allowing Russia to sell some oil and gas is actually more damaging to the Russian budget than selling none.

The issue is the price on the market and the leakage. It you could cut off Russia’s hydrocarbon exports completely then the budget would lose hundreds of billions of dollars and plunge the Kremlin into a very deep crisis.

But attempting to cut 11mn barrels per day (bpd) of Russian production out of the market will send prices through the roof. Current oil price estimates for a partial embargo is $100 a barrel next year, but for a stricter (but still incomplete) embargo the forecast is $140. The all-time high price for oil was $147 in June 2008. At those prices Russia makes more money than in the boom times 15 years ago. And currently it is running an all-time high current account surplus and selling more gas to Europe than it was before the war. The sanctions are not working. In fact, currently they are having precisely the opposite effect than intended.

And “embargo” is a bit misleading, as you can only stop the oil and gas going westwards, but not eastwards. Russian exports are expected to fall from 11mn bpd to 9mn bpd this year, and maybe even to 7mn bpd by the end of this year, but at $140 for a barrel Russia will still be rolling in cash. And that is before you take into account all the “commodity laundering” and “crude cocktails” that are already appearing.

A better plan would be to allow some sales, enough to create stability on the market, which would bring prices down. Even if they only fall to $70 – higher than the average before the war – then as Russian oil will still carry the current $30 per barrel discount that brings the effective price of oil to the Russian budget down to $40, just below the current budget breakeven price of $42. That’s even more painful, as it looks as, taken with the fact that the OFZ bond market is now closed to foreigners, the Ministry of Finance will find it very difficult to fund any deficit at all. Currently the domestic banks can fill the gap left after the foreign investors left in March, but they can’t keep that up forever. You can see how all this works.

Coming back to Ukraine buying Russian gas, this works well too, as unlike normal gas that only needs to transit Ukraine, this gas has to stop in Ukraine to be turned into hydrogen. That considerably improves Ukraine’s negotiating position. Moreover, Europe can simply turn off all the other pipelines and refuse to buy Russian blue gas (the one made from chemical reactions that has lots of CO2 as a by-product).

Finally, as for the problem of creating a new dependency on Russian gas, that won’t happen, as it will take so long to build up enough hydrogen production capacity to make this an issue, and in parallel Ukraine and Europe will continue to build up their renewable capacities. That will ensure (and it can even be tied to this) that Ukraine only buys enough that it can easily be replaced with very expensive US LNG in a crisis.

All of this should be extremely easy to organise, more effective in punishing the Kremlin and helping Ukraine, as well as solving one of Europe’s biggest headaches during its transition to a carbon-free energy scheme.