MOSCOW BLOG: Panic and protests in Russia, but not at mass demonstration tipping point yet 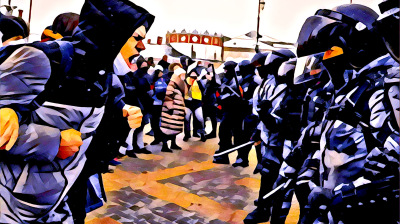 Protests have appeared in 32 cities across the country’s 11 time zones. / bne IntelliNews
By Ben Aris in Berlin September 22, 2022

Panic swept Russia after President Vladimir Putin announced mass mobilisation on September 21, with tens of thousands making for border to escape conscription into the Russian army. By the evening protests had appeared in 32 cities across the country’s 11 time zones, but their scale was small. Russian society has not yet reached the tipping point where the population can bring Putin’s regime down.

“There is panic now,” Katya, a high-end residential real estate executive, told bne IntelliNews, asking for her surname to be withheld, as criticising the Kremlin’s campaign in Ukraine is illegal. “No one is sure what is going on. There are still flights out of the country and some of our clients are talking about leaving at the weekend. But it's not clear if they can leave. It will all become a bit clearer in the next few days.”

While the mobilisation has been widely reported as “partial”, the wording of Putin’s decree puts no limits on the mobilisation order. However, at this stage clearly the Kremlin is limiting the call-up, as it attempts to strike a balance between finding more men to throw into the battle in Ukraine, but not calling up so many so as to spark mass protests.

“Basic fact: the majority of Russians only care about their everyday life. Hence the reaction will depend on whether [the mobilisation] will affect everyday lives,” says Greg Yudin, the head of Political Philosophy at the Moscow School of Social and Economic Sciences, in a tweet. “This is unclear yet. Putin can very well continue with [a] piecemeal strategy. He created a legal framework to extend it and stop/compensate for the leaks in his military. In that case, few people will be affected.”

Yudin goes on to say that because of the limited nature of the call-up, the fact that it is most aggressively being enforced in Russia’s poorest regions and that reactionary groups like students have been excluded so far, Putin’s famous social contact – “you don't interfere in politics and we won’t interfere in your lives” – has not yet been broken.

Restrictions on any male between 18 and 35 leaving the country have been announced, but according to reports the authorities are not enforcing the rule strictly. Some airlines have been ordered not to sell tickets to males between the ages of 18 and 35, but footage on social media showed long queues of cars forming at the land boarders with Finland and Georgia. So far it appears that those that want to flee the country can.

“The borders are not closed. It could be that people are allowed ot leave and then return freely when they realise there is no imminent danger – as it happened in February [when the war in Ukraine started],” says Yudin. “Putin still tries to please both the passive majority and the crazy militaristic minority.”

Apparently, Putin is allowing those who are ready to flee the country to do so, according to Denis Cenusa, Russia watcher and bne IntelliNews contributor.

“This conclusion is drawn from the way the flows at the border crossings with Georgia and Mongolia (so far). Moscow prioritises two things: 1) preserving a certain degree of stability at home by arresting those who protest and leaving the door open for those who can leave; 2) limit the degree to which forced recruitment can lead to the creation of deserters within the forces sent to Ukraine, which may actually help Ukraine’s liberation more than the Russian occupation,” Cenusa said.

While the reports from the last 24 hours have focused on the protests and traffic jams at the borders, there are also reports of many Russians enthusiastically signing up to fight. Putin’s personal popularity remains high and while there is a widespread passive acceptance of the war, there is a minority that have bought Putin’s narrative of “Russia under attack by Nato.”

“Many Russian men are voluntarily joining the army to fight in Ukraine. As can be seen in the video on departures of the men from Yakutia. They look older than 35 years. This leads to the assumption that those who were/are protesting or fleeing are between 18 and 35 years old,” says Cenusa.

The Kremlin strategy seems to be to let those that want to leave flee the country, as these are also the people that are most likely to attend mass protests were these to gather momentum. The Kremlin can then better control those that are left with repressive threats of jail time. And so far the strategy is working.

After Putin’s televised address in the morning, the Vesna NGO called for nationwide protests. Several thousand came out onto the street across the capital, and over 1,300 were detained, according to NGO OVD Info. The authorities had already tried to head the demonstration off the same day, warning that anyone who participated would be arrested and taken straight to army recruitment offices. The day before, the Duma had significantly stiffened the punishments for protests and draft dodging with jail terms of up to 15 years in prison.

More than 1,300 were detained at the biggest protests and around 500 were arrested in each of Russia’s twin capitals of Moscow and St Petersburg respectively (mostly women). Protesters in the central regions of Ulan-Ude were seen carrying handwritten signs reading “No war! No mobilisation!” and “Our husbands, fathers and brothers don’t want to kill other husbands and fathers.” A large proportion of recruits in the Russian army are from Buryatia, of which Ulan-Ude is the capital, and have also suffered a disproportionate number of deaths on the Ukrainian battlefield. But in absolute terms the number of participants was small.

“It was disappointing,” one protester in St Petersburg told a bne IntelliNews correspondent there. “I felt like I was almost alone. You would have thought more people would have come out given how important a day it was.”

Russian Defence Minister Sergei Shoigu said the same day that only 300,000 reservists would be called up from a total pool of 25mn eligible candidates and it has been reported that most come from poor regions such as Chechnya and the Siberian cities. The authorities seem to be deliberately avoiding Moscow and St Petersburg, the two most reactionary cities in Russia, for the time being.

But a lot of questions surrounding Putin’s Ukrainian “surge” remain unanswered. The Russian Army has shown itself to be unable to properly supply or co-ordinate the 190,000 troops it already has under its control. How will it cope with double the number?

It is also going to cost a lot. The budget in August was just about to go into deficit and Russian Prime Minister Mikhail Mishustin said last week that the government was expecting to end this year with a 2% of GDP deficit as oil and gas export revenues collapse. So far the war in Ukraine has eaten up all the budget surpluses in the first half of this year, but those costs are now likely to double.

“According to this estimate, 300,000 draftees will cost the Russian federal budget RUB1.3 trillion ($21.7bn) per year. This is slightly less than the budget's surplus in the first half of this year. But that surplus has since evaporated and it's unlikely that they'll draft 300,000 people,” said Andras Toth-Czifra, a political analyst and bne IntelliNews contributor, citing Russian publication finanz.ru. And this cost is only for salaries and before these men are fed, clothed and equipped.