MOSCOW BLOG: Putin is a victim of his own success 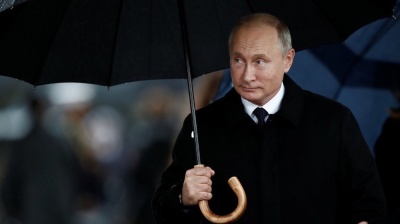 Moscow has been wracked by the largest and most violent demonstrations since the winter of 2011 in the last few months, just as President Vladimir Putin celebrates 20 years in power.

It’s easy to think that the people are simply fed up with Putin’s face and want change. And that is part of the reason. It’s also easy to see that bowed by almost six years of austerity they have had enough, while the Kremlin is attempting to crush any nascent revolution in the bud by crushing it under a jackboot. And that is also part of the reason.

But something else is also going on. Incomes have risen to the point, in Moscow at least, where the standard of living is the highest in the former Soviet Union (FSU) – apart from the Baltics – and life is pretty normal. The slow decay over the last five years as real incomes fall is not enough in itself to explain the palpable frustration with the Russian political system. Everyone would like a little more money, but with full employment no one is suffering like they did in the 90s.

That is Putin’s doing and everyone is well aware of that, hence his high personal popularity ratings. The 90s were a nightmare for most Russians, a fact that is not widely acknowledged in the west that focuses more on the politics of pseudo-democratic Boris Yeltsin who was simply “not a communist”. The economy had collapsed. Savings were hyper-inflated away in a matter of months. The shops were empty. The jobs were meaningless. Life expectancy was short. And the future was unknown. Old age was a terrifying concept, but ironically only the families that included a pensioner were sure of some sort of steady income.

Putin oversaw Russia’s revival and people are genuinely grateful for the stability and prosperity he brought. But it is also clear that today’s protestors can’t be bought off with the pension and public sector pay rises that worked in the past, or new parks, a few trees along Novy Arbat and Tverskaya, or the improved public services that have made Moscow a much more pleasant place to live.

The Kremlin must make concessions this time or it faces the prospect of being ousted from power by a violent coloured revolution of some sort – despite the fact that Russians are the least likely to go down this road of all the people of the CIS because they have the most to lose. The game has changed in a fundamental way as Russia enters its third phase of transformation.

Putin is a victim of his own success. For most of the last two decades Russians have been simply struggling to survive. But in the last decade incomes on a purchase price parity (PPP) basis have risen to the point where they are now on a par with the lower end of the EU. In 2000 I attended the first annual Putin presser where he set the goal of overtaking Portugal and that goal was met several years ago.

The squeeze on real incomes that followed the devaluation of the ruble in 2014 has catalysed the reaction, but Russia has reached the point where the people are starting to think beyond their immediate needs and want more say in how their lives are run.

To make this clearer, put it in terms of your personal time horizon. In the west you can see your whole life from the cradle to the grave pretty clearly. Of course you don't know the details, but you know ahead of you is an education, a career of some sort, a family if you choose, and, as you get older, finally a pension and health care until the grave – hopefully at a ripe old age. You can at least expect to live well into your 70s or even 80s

In Russia in the 90s people’s personal time horizon was measured in days. Beyond that – nothing was known. For men making it beyond 56 was already an achievement.

I was in Moscow when Yeltsin put the tanks on the street in 1993 and bombed the White House. That night sitting with Russian friends in the White Cockroach club our time horizon shrunk to a few hours as we had no idea what the morning would bring.

For most of that decade the goal was simply to get from Monday to the end of the week. The important purchasing decisions were a choice between a pack of Marlboro or the rank black tobacco of Belamorskaya Kanal cigarettes, or scrounging enough money together to get a new pair of Levis from the Gloria Jeans shop at the back of the Bolshoi Theatre.

By the time Putin took over in 2000 things were a lot more stable but it was in the boom years that followed in the noughties that the really dramatic changes occurred. The personal time horizon stretched out into months and then years thanks to an explosion of unsecured consumer loans and wages that rose 10% a year for a decade. The people bought clothes, then gadgets, then took out personal car loans and eventually 25-year mortgages.

It all started to go wrong in 2014 when the oil price crashed, dragging the ruble down with it. At the same time Russia’s petro-driven model was exhausted and GDP growth fell to zero in 2013, despite $100 oil.

The devaluation and the start of stagnation came as a big shock. Incomes were hurt and they haven’t really recovered since. Wage rises turned negative. The feel-good factor evaporated over night.

But despite these setbacks, the economy is still enjoying full employment. Inflation – still a huge bugbear for most Russians – fell to post-Soviet lows. And life continues to get better.

Today Russians’ personal time horizon has not quite reached the end of their lives but the government has vastly improved services and is at least talking about pension reform; the mortgage business is flourishing and the pension fund business has moved off square one.

Putin can, and has, taken credit for most of these changes, but it's not enough and these protests are born out of new demands by the population.

Russians continue to peer into the future and the government services are inexorably becoming more important. This is an irreversible and unstoppable process.

Everyone has got their jeans, their smartphone, their car, their nice holiday in Turkey and their apartment. But as life becomes normal they also want good schools for their kids, a clean neighbourhood with well-maintained roads, decent healthcare for when they get older, and a pension and functioning social services for when they get old. To this point buying a phone or booking a holiday was something individuals were responsible for. Going forward the new objects of desire are something only the government can provide. And it is not doing a good job. Increasingly the people want a say in how things are organised and what is provided.

“Gone are the days when society blindly trusted the president and approved his course. Now there is less approval and trust, and people want to participate in decision-making. The denial of registration to uncoordinated candidates was perceived by society as a denial of the right to be heard,” political strategist Sergei Polyakov said in a comment in Vedomosti this week.

The problem is increasingly clear to the political elite, but that elite is struggling to come up with a response. On August 12 a Communist Party Duma deputy and former riot police commander from the Irkutsk Region, Vyacheslav Markhaev, took the unusual step of criticising the authorities in power on his Instagram account: “Instead of listening to the complaints of [the protesters], organising a dialogue, the administration made a forceful decision, in many cases excessive.”

The problem is until now the government’s response to containing dissent has been to come up with top-down fixes. A spectacular new park has replaced the empty lot where the hotel Rossiya once stood next to Red Square. Hundreds of millions of dollars have been spent on Moscow’s beautification.

But these projects, while welcome and pleasant, miss the point. The landfill protests that have been sweeping the regions highlight the problem – the state is out of touch with what people actually want.

Moscow’s weekend protests are about entering candidates into the elections for the Moscow City government, a relatively unimportant body when it comes to Russia’s federal structure, but key to organising bottom-up changes to the way the city is run that meet the needs of local residents. The Kremlin has no mechanisms to run this sort of government. That is why it has to make concessions this time. It needs popular representation in local politics to be able to meet the needs of residents.

And that is all the protestors want. The opposition leaders may rail against Putin and his clique of stoligarchs, or state sponsored oligarchs, but most Russians remain wary of the opposition leaders and uninterested in ideology. Support for anti-corruption blogger and opposition activist Alexei Navalny polls in the single digits. What they care about is the local issues that affect their daily lives, like rubbish tips, parks and free bus passes. And now the people are insisting on having their own candidates in local government who they trust to explain this to the rest of government.

MOSCOW BLOG: Russian economy starts to turn up but so does inflation