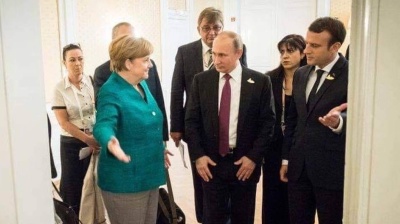 After five years of sanctions it appears Europe is getting tired of them. / wiki
By Ben Aris in Tashkent August 23, 2019

There is a creeping thaw in relations between Russia and the west. A string of events and meetings suggests the west’s resolve to make a pariah of Russia and punish it for its annexation of Crimea, interference in US elections and military adventures in the Middle East are waning. That doesn't mean sanctions are going to be lifted anytime soon, but it does mean new harsh sanctions are increasingly unlikely and room to cut some sort of deal is increasing.

Two major events this year highlight the softening attitudes to Russia. The first was the lifting of sanctions imposed on Russian aluminium producer Rusal last April – the first time any sanctions were lifted since they were first imposed in 2014.

The April sanctions were amongst the harshest yet, targeting oligarch Oleg Deripaska and his companies and banning investors not only from buying new securities, as with previous sanctions, but banning them from owning any of his securities or doing any business with him or his companies.

The US Treasury Department (USTD) underestimated how deeply Rusal is already integrated into the global economy and the chaos the sanctions caused on the international metal markets threatened to bounce back on the US economy. The imposition of those sanctions was first delayed before being dropped entirely in January as unworkable.

The unlikely postscript to this story was not only did the US drop sanctions on Deripaska but by February he announced a $200mn investment into what appears to be a spurious aluminium rolling plant in Kentucky, the home state of US leader of the house Mitch McConnell, earning him the moniker #MoscowMitch in the process.

In general the Russiaphobia has died off considerably since US special prosecutor Robert Mueller released his report that found “no evidence of collusion” between the White House and the Kremlin, even thought the report doesn't exonerate US President Donald Trump.

The second major event was Russia’s readmission to the Parliamentary Assembly of the Council of Europe (PACE) this summer, much to Ukraine’s chagrin. Seven members of PACE, all on or close to the Russian border, walked out in protest to “consult with the government”.

This was the second set of sanctions on Russia to be lifted in a matter of months. Russia was suspended from PACE following its annexation of Crimea, but interestingly almost all the other members of PACE voted overwhelmingly to return Russia to the chamber.

The rhetoric in support of Russia has been growing in volume. Italy and traditional allies like Bulgaria have frequently called for softening the stance on Russia, but the universal consensus vote that is required to keep extending sanctions has been held together by German Chancellor Angela Merkel, who effectively leads Europe’s foreign policy at the moment. However, with Merkel on the way out perhaps the EU’s resolve on Russia is already being shaken.

Trump was the latest to put the cat amongst the pigeons by suggesting in the run-up to this weekend’s G7 meeting that Russia be returned to the G8. The suggestion was quickly slapped down by EU leaders who pointed out that Russia was expelled following the Crimea’s annexation and the military support for rebels in he Donbas and on these points nothing has changed.

Moscow indicated that even if the offer to re-form a G8 was made, it would probably refuse. Firstly the Kremlin views the G7 as a has-been organisation that has been superseded by the G20, of which Russia is still a member. And secondly the Kremlin worries that joining the G8 again would be seen by Beijing as a end to the “pivot to the east” and endanger Moscow’s burgeoning support from Beijing, which is currently the cornerstone on which Russia’s foreign policy rests.

No one takes anything Trump says seriously any more, but when French President Emanuel Macron met Putin in France just before the G7 meeting and started talking about creating a market “from Lisbon to Vladivostok,” that is something else. Macron’s comment is a clear signal that he wants to improve relations with Russia.

The Eurasia Economic Union (EEU) was created after Russia’s ambitions to join the EU were rejected. Putin met then European Commission president José Manuel Barroso shortly after taking office and also floated the idea that Russia could one day join the EU to create a common market “from Lisbon to Vladivostok.”

In a study by PwC a few years ago, the consultant predicted that China would account for about 20% of global GDP by 2050, the EU about 25% and the US about 20%. Russia would be at best 5%. This poses a problem for Russia if it doesn't want to become a raw materials appendage to the real global powers. But by adding Russia’s economy to that of the EU, Russia’s natural partners, it would then be part of the big powers and able to stand up to China. If Russia goes it alone in a relationship with China, as it is doing now, that relationship with China is likely to become very one-sided.

Barroso rejected the idea out of hand. Russia is so big compared to the other EU countries that it would quickly swamp the EU institutions. The EU can’t let Russia in and retain autonomy nor stick to its vaunted values.

So Putin came up with the EEU, which serves a dual purpose. Firstly it binds the countries of Eurasia to Russia. China has been very active in Russia’s backyard, but the EEU forms a bloc so that Moscow’s interests need to be taken into account in talks between the Eurasian countries and Beijing.

Secondly while the EEU’s precursor, the Customs Union, was not compatible with EU regulations, the EEU is. In theory the EU and EEU can, as supranational bodies, sign a free trade agreement that covers all their respective members and create the talked of single market “from Lisbon to Vladivostok” fairly easily.

Ukrainian analysts are worried as the next renewal of sanctions on Russia is due in six months time and there is a growing possibility that they will dropped or at least weakened.

Ukraine has six months left to prevent the loss of European support for sanctions against Russia, Roman Bezsmertnyi, a former leading diplomat in the Trilateral Contact Group in Minsk, told Ukrainian state television on August 20. “During this time, we should organise an entire army of diplomats that will fulfil foreign policy. So far, this vector of President [Volodymyr] Zelenskiy is too weak,” he said.

Bezsmertnyi highlighted Macron’s soft touch in the language of the official statement following the Macron-Putin meeting. In addition to the big market comments, Macron talked about “the Ukrainian crisis” not a “war,” said he was willing to discuss Trump's idea of a return to the G8, and was generally accommodating.

“I listened to Macron’s remarks and I had the impression that I was listening to a funeral procession for the sanctions,” Bezsmertnyi said.

Indeed, Zelenskiy himself has hinted that he is willing to open talks with Putin – Macron’s meeting also included an attempt to broker a meeting between the two – and that he may be prepared to compromise in order to end the war, which won’t go down well with the electorate if it happens.

Why is this happening now? It's hard to point to a single reason but clearly a lot of ingredients have gone into the soup. Merkel has said she is leaving office. Foreign investors have been buying into Russian Ministry of Finance OFZ treasury bills as it has become clear the US Fed has stopped tightening monetary policy. Russia’s economy has very successfully shrugged off sanctions, which have caused pain, but not enough to force the Kremlin to do anything. Russia’s economy is growing again and European companies there are making more money than ever. And as the war in Donbas drags into its fifth year there is no sign that any progress is being made there at all.