Nazarbayev ousted from power, search for Kazakhstan’s vanished ‘Leader of the Nation’ centres on Switzerland, Russia and China 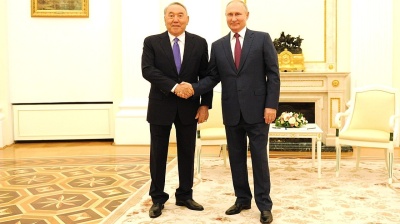 By all accounts, Kazakhstan’s “Elbasy”, or “Leader of the Nation”, Nursultan Nazarbayev, fled abroad in panic after simmering anger at the corruption and poverty inflicted on the ordinary people of the oil-rich state boiled over this week. The country’s post-Nazarbayev era has truly begun and those of the regime remaining in power will attempt to erase any linkages with the great (now not-so-great) man. How long can the name of the capital, three years ago renamed Nur-Sultan in his honour, survive?

Various speculation has Nazarbayev and other members of his immensely wealthy clan—such as his son-in-law and business oligarch Timur Kulibayev—in Switzerland, Russia or China, or perhaps in Abu Dhabi, or even only over the border from Kazakhstan in Kyrgyzstan as an interim temporary home. But Switzerland was on January 6 the bet of the Almaty correspondent of bne IntelliNews, who said: “Nazarbayev’s name has disappeared from reporting in the last two days; [he] fled the country on January 5 and is now believed to be in Switzerland.”

“Officially Tokayev now holds all the levers of power,” he added, referring to Nazarbayev’s handpicked successor Kassym-Jomart Tokayev, who became president in 2019.

Around the time of Nazarbayev’s apparent departure from Kazakhstan, Tokayev stripped his 81-year-old predecessor of his role as head of the State Security Committee, the successor to the Soviet-era KGB. In the three years since he handed over the presidency to Tokayev, 68, most people in the country of 19mn have remained suspicious that Nazarbayev, who boasts full immunity from prosecution in his homeland, has remained in control of Kazakhstan from behind the scenes. Interestingly, if any cases under international law are ever mounted against the brutal crackdown on the unrest of the past few days, Nazarbayev might benefit from the fact that he was relieved of his national security post before the shooting began in earnest. 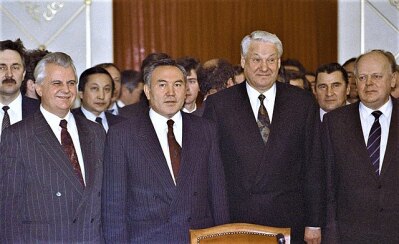 December 1991: Nazarbayev with, to the right, then Russian president Boris Yeltsin at a gathering of CIS heads of state (Image: RIA Novosti, CC-BY-SA 3.0).

The reputation of Nazarbayev, however, looks irreparably damaged. Not even ex-UK prime minister Tony Blair—who pocketed a small fortune by giving ‘public relations advice’ to Nazarbayev, even after Kazakh security forces in 2011 shot dead 14 people in a showdown with oil workers demanding better pay—would likely take on the task of restoring it.

The chant of “Shal ket!” or “Leave, old man!” was heard rising from many a rally as anti-regime sentiment in Kazakhstan ignited following the lifting of a price cap on vehicle fuel at the start of the new year. Whatever ‘personality cult’ sway Nazarbayev held over Kazakhs during certain phases of his long rule appears well and truly dissolved. Photographs of crowds pulling down Nazarbayev statues amid the unrest served to underline that.

Despite some warm praise from Blair over the years, including remarks made in a video released as recently as 2020, the ex-president—the last surviving Soviet-era leader in power when he stepped down as the autocrat who ruled over a country the size of Western Europe—is widely regarded as never having paid much more than lip service to democracy. If the wealth of the oil and uranium-rich nation had been more equitably shared during his 29-year-long rule, that might not have mattered so much to many of those who took to the streets to protest. But the fact is that Nazarbayev—a former Communist boss who was named First Secretary of the Communist Party of the Kazakh SSR in 1989 and became Kazakhstan’s first president the following year shortly after the gaining of independence from the Soviet Union—and his extended family are widely viewed as sitting on an obscene amount of unmerited fortunes.

If Tokayev uses the exit of Nazarbayev to dislodge the ex-president’s loyalists who still retain seats at the table of power and lucrative assets across the economy—and there is some evidence he is doing just that—there will still be the stupendous wealth that the Nazarbayev family and the associated ruling class have built up abroad, such as in London luxury property. His legacy trashed at home, Elbasy may find he still has plenty of friends offshore. On the other hand, film director Oliver Stone who made a hagiographic film portrait about Nazarbayev’s time in office, named Qazaq: History of the Golden Man, might find himself batting away demands for a remake.

The economic war that the West launched against Russia in the days following the invasion of Ukraine has already cost developing nations $379bn, analysts estimate.

The sudden exit of the Western companies, because of sanctions, leaves the modernisation of the Russian electricity sector in the lurch. Russia cannot make its own gas turbines that are at the heart of every power station.