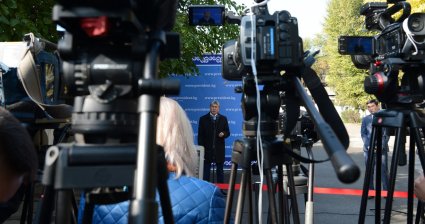 Atambayev seen addressing the media not long before he was succeeded by Jeenbekov, the election of whom he supported.
By bne IntelliNews June 18, 2019

A Kyrgyz commission of 12 parliamentarians on June 17 indicted ex-President Almazbek Atambayev on nine counts of corruption in a move that could mean he will be stripped of his immunity from prosecution.

Kyrgyz legislation allowing for the prosecution of former heads of state came into force last month immediately after Atambayev stepped down from the leadership of the Social Democratic Party of Kyrgyzstan (SDPK).

Atambayev became locked in a power struggle with his successor and former ally Sooranbai Jeenbekov over control of the SDPK and influence in Kyrgyz politics. Upon his election in 2017, Jeenbekov was widely seen as likely to turn into a puppet president in the hands of Atambayev. Their relationship took an antagonistic turn after Atambayev re-entered the limelight of politics as head of the SDPK in 2018 and publicly criticised Jeenbekov for failing to deal with a major winter power outage. This prompted a long-running crackdown on Atambayev’s allies and a rift within the SDPK. The conflict eventually led to the signing into law of the bill to strip former presidents of immunity for "especially serious crimes” by Jeenbekov in May.

60 lawmakers sign petition
The parliamentary commission was formed after 60 lawmakers signed a petition accusing Atambayev of multiple alleged crimes of corruption, including supposedly usurping power while in office.

To strip an ex-president of immunity, parliament is required to file charges with the prosecutor-general's office against the former leader. Parliament can then strip him of immunity, if the nation’s top lawyer finds grounds for parliament’s charges.

Meanwhile, Atambayev has launched a fightback by issuing a formal complaint via Kyrgyzstan’s Military Prosecutor's Office. In it, he blames the State Committee for National Security (UKMK) for bugging his office. The move might be an attempt to prevent any information obtained on him by the UKMK from being used against him in his upcoming battle against the parliamentary commission’s allegations.

Kyrgyzstan, due to the two post-Soviet Union revolutions it has been through and crackdowns mounted against the SDPK’s rivals after the 2017 presidential elections, is widely seen as a politically volatile nation. If Atambayev’s prosecution is successful, the case could lead to an even more toxic political atmosphere. That might especially be true at the end of Jeenbekov’s term of office, when it will be his turn to step down and potentially face some degree of paranoia that he will be pursued by his successor.