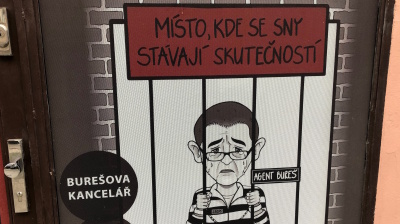 A cartoon of Babis in jail in Prague.
By bne IntelliNews October 20, 2021

Czech acting Supreme Public Prosecutor Jaroslav Saroch will ask the lower house of parliament to lift the immunity from prosecution of  Prime Minister Andrej Babis (ANO) so he can be tried in the Stork's Nest case, where he is alleged to have committed fraud with EU subsidies.

This vote will take place after the constituent session of the new Chamber of Deputies on November 8, confirmed Ales Cimbala, a spokesperson for the Prague City Prosecutor's Office, to the Czech News Agency.

Saroch was originally supposed to make a decision on the police's motion to file charges by October 20, but given that Babis regained his seat in the house after the general election with an MP´s immunity, his prosecution is now again suspended.

"The public prosecutor's office is bound only by the Criminal Procedure Code in its activities, and for that reason it must now respect the fact that one of the accused persons has regained his parliamentary mandate and the immunity that goes with it. No criminal proceedings can currently be taken against this person,” Cimbala explained. “The Chamber of Deputies will be asked to make this person available for further criminal prosecution following the establishment of the relevant bodies of the Chamber," Cimbala added.

The decision to ask for the lifting of Babis' immunity does not necessarily mean that Saroch agrees that there is now enough evidence to go to trial. However, it indicates that events are now moving in that direction.

"The request by the Prague prosecutor to lift Babiš’s immunity is an interesting development, simply because if the prosecutor had decided that Mr Babiš should not be sent to court, should not be prosecuted, he would probably not ask for this," political commentator Jiri Pehe told Radio Prague International.  “His move seems to suggest that he is seriously thinking about sending Mr Babiš to court, to actually send his entire case higher, so to speak."

The six-year-old case has been repeatedly held up, giving rise to suspicions that Babis has interefered with its progress. Saroch's predecessor had resigned, complaining of interference by ANO’s justice minister, who had herself been appointed in place of an insufficiently loyal predecessor. The Chamber of Deputies has already handed Babis over for prosecution twice, first in September 2017 and then in January 2018 after the elections in which Babis was re-elected.

Saroch returned the case to the police for further investigation at the beginning of September, ostensibly due to the uncovering of new information, ensuring that the issue was shelved until after the general election on October 8-9.

It had been expected that Saroch – who before he became acting supreme public prosecutor had said there was not enough evidence to prosecute Babis – would drop the case after the election hubbub was over, but the defeat of Babis in those elections may have changed matters.

Both Babis and his family have been charged as part of the investigation into allegations of how €2.3mn in EU funds were allegedly falsely obtained by the Stork’s Nest conference centre, for which Babis' son Andrej Babis junior was one of the nominal owners.

The EU funds were designated for small enterprises, while according to police and an EU investigation, the complex was in reality always part of the premier's Agrofert conglomerate. Babis dismisses both the EU and Czech probes as political  attacks.

Also in September, Babis junior was questioned by police about his accusation of his father allegedly kidnapping him and holding him captive in the Crimea to prevent him from testifying in the Stork’s Nest case in 2017.

On October 20, PM´s son approached the police saying his father reportedly wants to meet with him, which, according to his lawyer, Vitezslav Dohnal, could be influencing a witness, the news server SeznamZpravy reported.

Dohnal told the server that he has already informed police and prosecutor Saroch about the PM´s efforts.