New daily coronavirus cases in Russia top 10,000 again, down to single figures in much of CEE 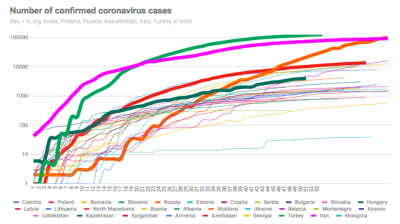 Russia now has the world’s second-fastest growth of coronavirus (COVID-19) cases after the US, data from the World Health Organisation shows.

In the last seven days Russia had the fastest growth in new COVID-19 cases outside the US. Source: WHO

Among those to have fallen victim to the virus is Russian Prime Minister Mikhail Mishustin, who withdrew to self-isolate as the long May Day holiday began. Reportedly he was infected by a doctor treating members of the Kremlin elite. The May Day holiday also marked the end of Mishustin’s eventful first 100 days in office that saw both the escalation of the epidemic in Russia and the collapse in oil prices.

With peak infection estimated at almost a month away, the authorities have started converting Moscow’s iconic VDNKh exhibition centre into a temporary hospital. Videos posted on social media showed workers building cubicles and setting up hospital beds in the main pavilion halls of VDNKh that was set up in Soviet times to show off the successes of the workers' paradise.

Moscow remains the epicentre for the outbreak, but the authorities said that it may start easing the restrictions from May 11 in some of Russia’s regions if possible.

The virus continues to wreak economic havoc in Turkey, where the Turkish lira has weakened through the psychologically important 7.00/$ level not seen since the August 2018 currency crisis.

Meanwhile, the headline purchasing managers’ index (PMI) score for Turkish manufacturing in April marks the sector’s steepest slowdown since the global financial crisis. Andrew Harker, economics director at IHS Markit which compiles the index, commented: “The April PMI data provide a sobering insight into the dreadful impact the COVID-19 [coronavirus] pandemic and associated lockdown measures had on the Turkish manufacturing sector during the month.”

On a more positive note, Turkey has handed over the title of the biggest emerging market outbreak to Russia, and the number of daily new cases is falling; it fell below the 2,000 mark on May 3, having dropped by around a third compared to its peak in April

The number of cases is also growing fast in Belarus, which now has the region’s fourth largest outbreak after Russia, Turkey and Iran, all of which have much bigger populations.

Cases continue to rise by several hundred each day in Poland, Romania and Ukraine.

However, there is much better news across much of Central and Southeast Europe, where strict and early lockdowns appear to have brought the virus under control.

Over the last few days the number of new cases dropped to single figures in many countries, and none at all were reported on May 4 in Albania, Montenegro and Slovenia.

In response, lockdowns are being lifted, typically in several stages and with great caution, as governments don’t want to risk a resurgence of the virus. Major firms including those in the automotive sector — an important engine of several central European economies — are getting back to work with new hygiene and social distancing measure in place. Romania’s Ford and Dacia plants were the latest to resume work on May 4.

Elsewhere, the tourism-dependent economies of Southeast Europe are looking at options to allow the tourism season to go ahead in some form, possibly by focusing on tourists from other countries in the region that have managed to subdue outbreaks of the virus.

However, the experience of Bosnia & Herzegovina has shown that too quick a lifting of restrictions can lead to fresh outbreaks.

“We shall follow the trends but it is certain that the situation has become more complicated. Now when the number of newly infected was supposed to decrease it is rising for several days and this is concerning,” the entity’s President Zeljka Cvijanovic said in an interview with Srna news outlet. She added that, if necessary, some restrictions that have been lifted will be reimposed.

Czech industrial production down by 25% y/y in May, up 13.8% m/m
22 hours ago
Foreigners’ share at Borsa Istanbul falls below 50%
1 day ago
Albania’s annual CPI inflation slows to 1.8% in June
1 day ago
COVID-19 lockdown sends Hungary's industrial output back to 2013 levels
1 day ago
Russia’s Watcom Shopping Index regains three quarters of ground lost to coronacrisis
2 days ago