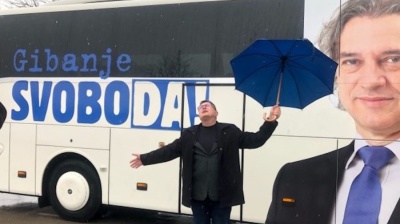 By Valentina Dimitrievska in Skopje April 24, 2022

Only five parties will enter the Slovenian parliament. The outcome of the election shows that Jansa will go into opposition, while Golob will be able to form a stable government with the support of some other parties that passed the 4% threshold.

After 99.2% of the votes were counted, the results showed that three other parties passed the threshold, New Slovenia (NSi), which is part of Jansa's current coalition, gaining 6.88% of the votes, followed by the opposition Social Democrats (6.65%) and the Left party (4.3%).

The Social Democrats and the Left are part of the opposition KUL four-party coalition, which also includes the List of Marjan Sarec (LMS) and Alenka Bratusek’s Party (SAB). The parties agreed last year that they would work together post-election to form a government without Jansa's SDS.

Translated into mandates, the Freedom Movement would have 40 MPs, followed by SDS (28), NSi (8), the Social Democrats (seven) and the Left (five).

The List of Marjan Sarec (LMS) failed to pass the threshold as it was supported by only 3.71% of voters. Let’s connect Slovenia coalition gained 3.44% of the votes. Other parties are below 3%.

Jansa thanked people for their votes in a tweet.

The president of the Social Democrats Tanja Fajon, who is set to be part of the new government, said she was satisfied with the election result and that the common goal was achieved.

“Congratulations to Robert Golob. We have achieved our common goal. It is to start making changes, to lead Slovenia on a new path. I believe we will be able to restore people's trust in politics and return normalisation to this country,” Fajon said, according to Vecer.

NSi president Matej Tonin said prior to the election that he would be open to joining a coalition with Robert Golob's party — but without the Left, as he called the Left’s programme “harmful”.

Two seats are reserved for the Italian and Hungarian minority.

1.7mn people were eligible to vote in Sunday’s election to elect 90 members of the parliament. Polling stations opened at 7 am and closed at 7 pm. The turnout was 69.19%.

55-year-old electrical engineer Golob was appointed leader of the renamed non-parliamentary green party Freedom Movement at the end of January. The Freedom Movement was formerly known as Green Actions Party (Z.Dej), which was led by ex environment minister Jure Leben.

Prior to the election, Golob said that he was not worried about how many seats his party would gain, but that he wants to form a government with 60 MPs. Golob has repeatedly said that he sees the KUL coalition as natural post-election allies, but he does not intend to collaborate with Jansa’s SDS or the other two parties in the current ruling coalition.

At the heart of the Freedom Movement’s programme are green breakthroughs and the creation of conditions for a sustainable economic and social model that will be resilient to the consequences of any financial, energy, food and war crises.

The party focuses on the complete abandonment of fossil fuels, waste reduction, the launch of multibillion-euro investments in renewables, sustainable mobility, energy and food self-sufficiency, as well as the green transformation of industry and agriculture.