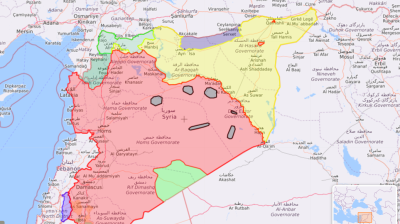 The Syrian Democratic Forces (SDF) have carried out military operations in the Turkish provinces of Sanliurfa, Gaziantep and Mardin, the SDF said on August 18 (map).

On August 16, Turkey’s defence ministry announced reported mortalities caused by mortar fire on the town of Birecik in Sanliurfa province.

The SDF statement asserted that it, an alliance of forces formed during the Syrian Civil War, was the perpetrator.

Turkey has lately escalated its aggression in the region of Syria where the SDF operates (yellow part on the map), the SDF added.

Reportedly, Erdogan asked for Putin’s backing for a Turkish attack on Kurds in Syria. Putin responded that Turkey had already carried out limited operations against the Kurdish forces and advised Erdogan to work with Syrian President Bashar al-Assad. The operations have included shelling, armed drone attacks, assassinations and bombings.

Since the meeting with Putin, Erdogan has been preparing Turks for another dizzying U-turn when it comes to foe Assad.

Jihadists in northern Syria (light green and grey parts along the Turkish border on the map) have, meanwhile, held protests in reaction to Turkish officials’ comments on arbitrating matters between the Assad regime and the jihadists.

The SDF was formed by the Kurdish People’s Defence Units (YPG), an armed Syrian offshoot of the Kurdistan Workers’ Party (PKK). The US has depended on the YPG to fight Islamic State for around eight years.

In April, Turkey launched an offensive against the PKK in northern Iraq. Since then, the press release section of the Turkish defence ministry’s website has once again been full of cases of “martyrdom”.

In the spring, when the snow melts in the mountainous Iraqi region where the PKK is based, the Turkish state and the PKK traditionally launch a season of bloody attacks. They have been fighting for more than four decades.

Meanwhile, growing anti-migrant tension is boiling over in Turkey. Since the US exit from Afghanistan in August last year, Turkey’s problem with uncontrolled migration has shifted up a few places on the long list of Turkish woes that have got beyond the point where they can be solved.

How many migrants have entered Turkey is widely regarded as completely unknown.

Estimates suggest that there are at least 10mn migrants in the country with an official population of around 85mn. The calculations include members of all jihadist organisations formed around the world.

Rights organisations are concerned at just how many Turks descend into insulting ordinary Syrian and other migrants who work in unregistered jobs. Indeed, there seems to be some determination in Turkey to create some serious violence over migrants in the country. By now, almost every day, there are clashes across various neighbourhoods.

The establishment and middle class in Turkey, ranging from the political sphere to the media, do not seem to be aware just how grave the situation is in the country.

Turkey’s southern border area is essentially a battlefield running from one end to the other. In addition to the threat posed by hostile Kurds, pro-Turkey jihadists could at any time turn on Turkey.

What’s more, there are some al-Qaeda offshoots (dark green on the map, across Idlib region) present on the border with Turkey’s Hatay province. Nobody has any idea what the distinguished politicians engaged in this great bog of enmity will do with them.

All the subjects in question have their own networks and ability to strike within Turkey.

There are analysts who conclude that there is no need to think for too long to work out what could happen when the chaotic balance of power in question gets out of control. Iraq and Syria offer salutary lessons.

Speculation can also take you to the conclusion that such a situation might present Erdogan—Turkey’s leader of two decades who must stand for re-election by next June at the latest, having led the country into economic turmoil that could turn out to be its worst in living memory—with his only path to remaining in power. After all, Syria has been destroyed by its multi-faceted war, but Bashar Assad remains at the helm.