No room for complacency amid new corona outbreaks in emerging Europe 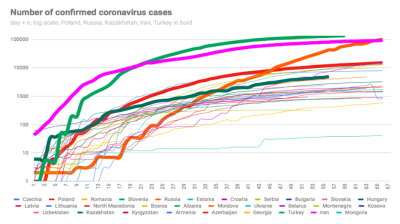 Surges in the number of new coronavirus (COVID-19) cases have been reported in recent days in the South Caucasus, Iran, Poland’s coal-producing regions and Moldova.

This follows a loosening of restrictions in several of these countries, highlighting the dangers of lifting lockdowns too soon, and the dilemmas governments face as they seek to balance the need to protect public health with reviving economic activity.

As bne IntelliNews reported last week, a second wave of infections has emerged following the easing of restrictions in Iran and Armenia – with those newly infected including Armenian Prime Minister Nikol Pashinian and his family – while the number of new cases has also spiked in Azerbaijan, which imposed a strict lockdown over the weekend. The trend continued in the following days. 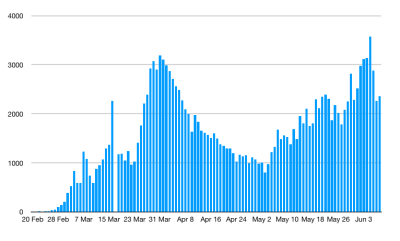 As Iran's lockdown was eased, the daily number of new cases shot back up. Source: WHO. 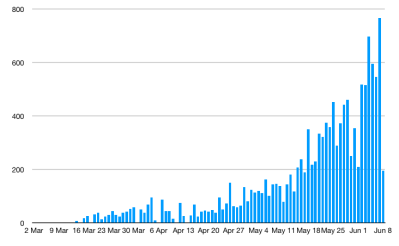 The daily tally of new cases in Armenia has increased recently. Source: WHO. 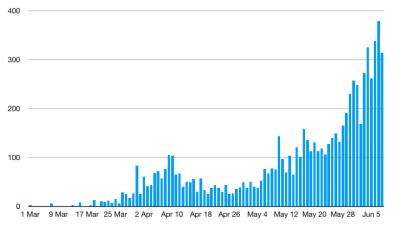 The number of new cases reported daily in Azerbaijan hit new highs at the beginning of June. Source: WHO.

There is, however, room for hope in Iran that the accelerating infection trend rate is partly a result of more testing and better recording of data, a theory put forward by Iranian health ministry officials based on the fact that the number of daily coronavirus deaths is not moving upwards at the same rate as new infections.

The Moscow city council will have rolled back the coronavirus lockdown restrictions as of June 9, with only a one-day notice and no sharp improvement in epidemic numbers, raising speculations that the Kremlin could be pushing for normality ahead of the recently announced national voting week.

Russia has the region’s biggest outbreak – and one of the largest in the world – with 476,658 cases confirmed as of June 8, according to World Health Organisation (WHO) data. While the daily number of new cases has dropped, it remains at over 8,000. 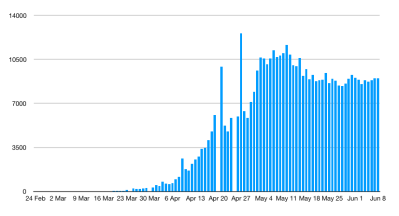 The number of new cases reported daily in Russia remains over 8,000. Source: WHO.

As reported by bne IntelliNews, Russians will head to the polls on July 1, despite the pandemic, to vote on constitutional amendments that would allow President Vladimir Putin to run for office again in 2024 for another two 6-year terms.

On June 8 Moscow's mayor, Sergei Sobyanin, said that the COVID-19 "catastrophe has been averted", effectively lifting all strict lockdown measures except for the requirement of wearing masks and gloves in public places.

Poland reported a record number of new infections over the weekend: 576 new coronavirus cases on Saturday and 575 on Sunday, the health ministry said.

Most weekend cases were in Upper Silesia, where a coronavirus outbreak has occurred in the region’s coal mines, and in an ice cream factory in the town of Dzialoszyn, south-central Poland.

In response, work was suspended at 12 coal mines in the southern region of Upper Silesia for three weeks starting June 9.

Ten of the suspended mines are operated by Europe’s largest coal-mining company, PGG; the remaining two are owned by coke miner JSW. The miners’ pay will not be affected in any way, State Assets Minister Jacek Sasin told a press conference.

PGG has reported 1,638 coronavirus cases, while JSW’s tally came in at 2,771, the companies said in separate statements on Monday.

Polish coal mines were also a major source of new infections in mid-May, the last time a spike of new coronavirus cases took place. Coal companies came under criticism for failing to introduce full safety measures during the earlier stages of the pandemic, which struck at a difficult time for the industry.

There is further danger ahead, as most restrictions imposed in March and April have now been lifted, and Polish politicians have embarked on their campaigns – including mass rallies – ahead of the June presidential election.

“Out of control” in Moldova

Moldova, one of Europe’s poorest countries, had racked up a total of 9,700 infections as of June 8, among a population of just 3.3mn. The country confirmed over 1,400 new cases during the first week of June.

Former health minister Ala Nemerenco, a staunch critic of the current government’s handling of the pandemic, wrote on Facebook on June 7 that the situation is “out of control”.

“You don’t have to be an epidemiologist or a virologist, or even a doctor, to understand that the situation is out of control,” Nemerenco wrote. In a later post she slammed the government’s “perfect incompetence”.

bne IntelliNews reported last week that while the authorities have admitted a worsening of the epidemiological situation, they say they have had to relax movement restrictions in line with expectations of the population.

With 2,235 cases per 1mn people, Moldova is not far from the rates of France (2,336) and is ahead of Germany (2,208). The count is, however, particularly high for the region, where the pandemic has had relatively milder effects: it is twice as high as in Romania, which itself does not fare well compared to its neighbours (Hungary at 409, for instance).

But the biggest problem is that in Moldova the number of active cases is still rising – while the trend is downward for most of the European countries and particularly for the countries in the region. 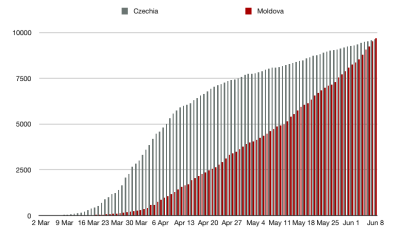 Moldova has now reported as many cases as Czechia, and the number has been rising fast recently. Source: WHO.

More cases are expected after Moldovans celebrated another religious holiday on June 7-8, when large groups of people typically gather at cemeteries.

Previously, the number of active COVID-19 cases in Moldova resumed growth roughly one week after Orthodox Easter on May 19, after it started a declining trend.

New outbreaks in the Western Balkans

On the western side of the Balkan Peninsula, several countries have virtually eliminated the virus: new cases have dwindled to zero or close to zero in Croatia, Montenegro and Slovenia.

However, elsewhere in Southeast Europe there have been a number of recent outbreaks that have forced officials to rethink the lifting of restrictions. 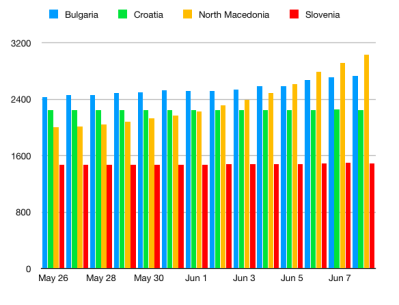 The number of cases has remained steady in Croatia and Slovenia, while continuing to increase in Bulgaria and North Macedonia. Source: WHO.

North Macedonia’s authorities decided on June 3 to re-impose a three-day curfew in the capital Skopje and several other cities, where the number of newly infected people with coronavirus drastically increased in the preceding week.

The decision was made with the aim of avoiding mass gatherings during the Pentecost holiday on June 5, which is a non-working day in the country.

Bulgaria’s chief state health inspector, Angel Kunchev, said on June 9 that he would ask the government to extend the extraordinary epidemic situation, as the number of new coronavirus cases is increasing sharply due to an outbreak in one area, public broadcaster BNT reported.

The extraordinary epidemic situation was due to expire on June 14, and Prime Minister Boyko Borissov said the government would lift all remaining restrictions after that date.

However, the number of new cases stood at 83 in the past 24 hours – the highest number since the peak of infections Bulgaria registered after Orthodox Easter at the end of April. Most new cases, 50, were among workers at a toy factory in the southern Bulgarian town of Dospat. The virus spread unchecked among workers, who hid their symptoms by taking Analgin to suppress higher temperatures for fear of losing their jobs.

Iran’s “vaccine tourists” sleeping on streets of Yerevan after tightening of rules
bneGREEN: CEE surfs the green bond wave
Perspectives - What to expect from the new Iranian president – a view from the Caucasus