No wonder Turkey’s in a hurry to open up its economy, latest economic data is catastrophic 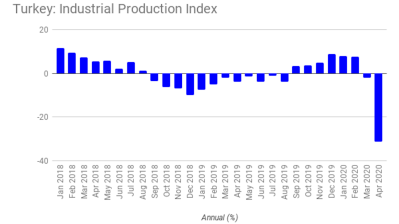 It’s no wonder Turkey is in a hurry to put coronavirus (COVID-19) restrictions behind it and open up its economy—the April industrial production and retail sales data its government statisticians released on June 12 was catastrophic.

Then, as open-mouthed analysts digested just how bad the figures were, next up was an indignant intervention from the Turkish Medics Association (TTB) in which officials were accused of trying to sell Turkey’s battle against the coronavirus as a “success story” and were discussing when a second wave of infections might hit when it was not even possible to find any scientific basis for determining that they had overcome the first wave.

Even though the Erdogan administration opted for selective curfews rather than a general lockdown amid talk of keeping the wheels of the economy turning despite the pandemic, Turkish economic activity basically fell off a cliff in April.

“Industrial production plunged by a staggering 30.4% m/m in April, which pulled the year-on-year growth rate down from -7.1% in March to -31.3%,” Liam Peach, emerging Europe economist at Capital Economics said in a note on the record-breaking data, adding: “This was weaker than the consensus forecast of -17.0% y/y but not as bad as our own (-40.0% y/y). Following the 6.8% m/m fall in March, industrial production has fallen by 35.1% since February, one of the largest downturns across advanced and emerging economies.”

Noting that retail sales fell by 21.0% m/m and 19.3% y/y in virus-wrecked April, Peach added that Capital now expected the Turkish economy to suffer one of the largest second-quarter GDP contractions across major EMs, amounting to more than 15% q/q. 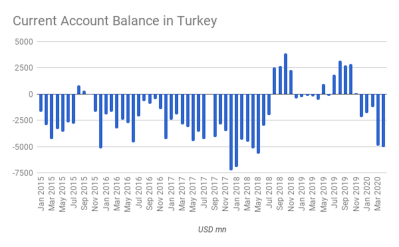 June 12 brought another blow when Turkey’s central bank announced that the country's current account deficit in April widened to $5.06bn, worse than a Reuters poll forecast for a deficit of $4.5bn. In March, the deficit stood at $4.84bn. Coronavirus measures on export markets, including bars on travel that have devastated Turkey’s big tourism industry, took a heavier than anticipated toll.

Striking a badly needed bright note, Capital said the collapse in activity in April would probably mark the low point for Turkey’s economy, with the rebound in the manufacturing purchasing managers’ index (PMI) in May suggesting that industrial activity has clawed back some ground.

“That said, lockdown measures were in place for the majority of the month and any pick-up in activity in May is likely to be limited—low-profile data from Google suggest that travel and recreation activity has only started to pick up more sharply over the past few weeks as lockdown measures have eased,” Peach added.

A breakdown of the April industrial data showed manufacturing hit by 32.5% m/m, with auto production experiencing the worst outcome, plunging an eye-popping 73.8% m/m. Production of electrical equipment also fared badly, while the output of chemicals and pharmaceuticals saw a better performance.

In retail sales, food and tobacco sales “were quite resilient—sales fell by ‘only’ 5.2% m/m as some of the boost from stockpiling in March unwound” said Peach. “Unsurprisingly, clothing sales were hit hard as sales plunged by a staggering 68.2% m/m,” he added.

Turkey’s fight against the coronavirus has been winning some good foreign press recently, with various correspondents praising the effort as a relative success. But top Turkish medical association TTB is unimpressed with the government’s fast approach to easing the pandemic restrictions, saying the strategy is not backed by science and was premature.

As if to confirm that opinion, the June 12 official data showed the infection rate once more moving above 1,000 in a day. Some 1,195 new cases were identified, up from a last trough of 786 on June 2, with 15 people recorded as positive for COVID-19 dying in the last 24 hours. Daily infections stood above 5,000 on April 11.

Cavit Isik Yavuz, a member of the coronavirus research team at the TTB, said there was still no proof that Turkey has its outbreak under control. “At times, there is talk of when the second wave will hit, but we have not yet been able to overcome the first wave,” Yavuz told an online press conference. “The early re-opening decisions that are not based on scientific facts, especially since June 1, have caused a rise in case numbers and the number of patients receiving treatment in ICUs and needing respirators.”

On June 11, Health Minister Fahrettin Koca said there had been a rise in daily cases in certain provinces, but said that this had stabilised.

“We are looking for a scientific basis for nearly all the measures that are being eased, but we cannot find any,” Yavuz added. “We find it odd that in a pandemic where we lost nearly 5,000 citizens, there is an effort to find a success story.”