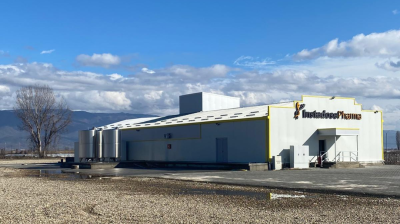 Canada-based wholesale cannabinoid company Instadose Pharma is working on de-stigmatising cannabis and establishing the world’s largest continual supply of medical cannabis, a rapidly growing market estimated at $20.5bn in 2020 and projected to reach $90.4bn by 2026.

The Canadian company has partnerships in South Africa, Mexico, North Macedonia and Portugal and plans to build relationships and joint ventures with other countries around the world. It is seeking to create a large commercial outdoor growing, cultivation, production and global distribution platform for medicinal cannabis and cannabinoid oil, which will provide drug companies with sustainable and low-cost supplies of high quality medicinal cannabis and cannabinoid oil for use in bulk as an active pharmaceutical ingredient.

David Curry, VP media and public relations at Instadose Pharma, told bne IntelliNews that the company is working on growing programmes in the developing world and argues that there are numerous benefits. Namely, cannabis is a high value crop and green renewable resource, and its cultivation can create jobs for many people in the developing world.

"This will be the first full load when completed," Curry told bne IntelliNews, adding that Instadose has extensive contracts with various joint venture partners around the globe.

According to him, the product is designated for the medicinal cannabis market and there are various customers, which have different requirements depending on how the constituent ingredients are to be used.

“The country has favourable conditions to do business and has an excellent geographic location to the EU,” Curry said. North Macedonia has been an EU candidate country since 2005.

Its Macedonian unit Instadouz Farma is a fully licensed processor of cannabinoid oil for export and sale located in the southeastern town of Strumica.

“North Macedonia is a progressive country looking to develop its economy and Instadose has been honoured to be working with the government of North Macedonia and its business partners," Curry said.

Asked why the company imports medical cannabis when North Macedonia has legalised the growing of the plant, he said that the scale required for medical cannabis supply requires large and continuous volume year round.

“Many areas in Africa where Instadose is working with its growing partners are able to supply that continuous and consistent quality on an ongoing basis throughout the year,” Curry stated.

He revealed that Instadose Pharma plans to continue to develop its business in North Macedonia and increase volumes imported from partners not only from southern Africa, but with many partners in Africa and around the world.

Skopje legalised the use of medical cannabis in 2016, when now opposition VMRO-DPMNE was on power. Thus, North Macedonia became one of the few countries in the world that allows the cultivation and export of cannabis products, opening doors for investors.

In November 2020, Social Democrat Prime Minister Zaev said that he supports the decriminalisation and legalisation of cannabis consumption, saying that this will help the tourism and hospitality industry in the country.

The country has implemented a free market approach to cannabis cultivation, distribution and sale, using Canada’s approach, according to Bearstone Global’s market analysis for North Macedonia released in April 2019.

North Macedonia’s drug company Replek Farm was the first in the country to begin marketing this product in 2016, which quickly followed by the Skopje-based NYSK Holding which started production in May 2017.

In June 2021, NYSK Holdings became the first company in North Macedonia to receive a license to export dried cannabis flowers, which was needed for the company to start exports to Poland.

North Macedonia is now utilising the sale of the plant for economic purposes, to reduce jobless rate and to boost the industry locally, according to the report.

The majority of the product is cultivated using the so-called ‘indoor technology’, and some is grown in greenhouses.

According to the Prohibition Partners' European Cannabis Report released in April 2021, the European cannabis market is forecast to reach $3.8bn by 2025.

About the African market, Curry said that many countries, particularly in central and southern Africa, have long histories of growing cannabis, but the evolution and development growing programmes for medicinal cannabis is still in its infancy.

“Instadose works with its growing partners and the local, regional and national governments in Africa to help to develop these opportunities,” he said.

The market in South Africa has grown in recent years, particularly after the ruling of the Constitutional Court in 2018, which decriminalised forms of personal consumption of cannabis, which caused interest from abroad in the cannabis industry to increase.

According to Curry, there is a long colonial legacy and stigma in many places that needs to be overcome, however, he underlined that the cannabis is green renewable resource and a high value crop that has the potential to have many benefits related to socio-economic development, food and water security.

“Speaking of the economic impact, this plant is a high value crop relative to other crops, or 50 to 70 times more valuable than a crop like corn or potatoes. So when looking at impacts if we are talking about a crop that sells for dollars at the farm gate per kilo rather than pennies per kilo in places where the majority of farmers are women this is going to have a direct impact on what that person, family or community can do,” Curry said.

"Countries want to have conversations about legalising cannabis or developing growing programmes because of the power that this crop has to assist in socio-economic development.  This is a long road and we need to help start that conversation and work with our partners, which inevitably is going to be the foundation of all companies who work in this area," he stated.

In a country like Canada, where it is now legal, the change in the perception of cannabis in recent years is vast and the stigma has rapidly fallen away, according to Curry.

Curry agued that cannabis and hemp plants, unlike mining, are a green renewable resource that contributes to carbon sequestering though the way the plant captures carbon, and the beneficial changes it can have on the biome of the soil as the complex soil and fungi are fundamental to the carbon cycle.

“Improved soil health is something people are becoming more and more aware of and something that modern agricultural practices like tilling and fertilising run counter to. Cannabis is an excellent durable plant that helps improve soil quality by increasing the complexity and biodiversity of the soil with relatively little inputs,” he said.

He said that in developing countries, where there could be multiple crops in a year, cannabis could be a big contributor on turning the tide against climate change though simply growing the plant and increasing the fertility of the soil.  This is a relatively new area, however, but one that is receiving a great deal of attention.

"I am sure that there will be an ever increasing and overwhelming body of evidence supporting cannabis and hemp and its benefits to the environment," Curry said.

No progress in talks between Bulgaria, North Macedonia on lifting veto on EU accession talks
CEE companies weather the COVID-19 crisis
Macron urges Sofia and Skopje to solve their dispute amid tensions in Europe

Lukashenko’s attempt to save face via mixed messages of peace and increased threats of war with the West and Ukraine haven’t got him very far and many Belarusians are more than eager to bring the fight to Lukashenko.

Explainer | Why Tajikistan’s Pamiris don’t trust their government
18 hours ago
Meet the latest Russian tycoon to be promoted to the Premier League
21 hours ago
Ruble falls to below RUB60/$1, putting pressure on the Russian budget in 2022
1 day ago
Belarus announces next stage in “surprise inspection” of its armed forces
1 day ago
Poland expected to avoid hard landing
2 days ago