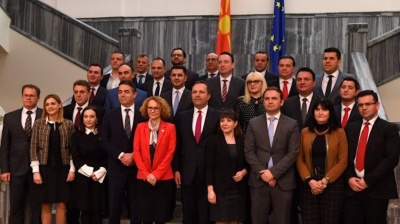 By Valentina Dimitrievska in Skopje January 5, 2020

The government will be responsible for organising snap general elections in April, after Social Democrat Prime Minister Zoran Zaev filed his resignation in the morning of January 3, as he previously promised.

Zaev said he would step down after EU leaders failed to give a date to Skopje (and also Tirana) in October to launch EU accession talks due to the French veto. Zaev, deeply disappointed with the outcome of the EU summit, pledged at the time he would resign to open the way for early elections, which are due to be held on April 12.

101 MPs voted in favour of the interim government in the 120-seat parliament with no votes against or abstentions. The multi-party government will include two ministers from the opposition VMRO-DPMNE.

Spasovski said during the inauguration that the main priority of the interim government is to organise free and democratic elections, and appealed to the opposition to take part in this process.

Other priorities in the short period of time before the election will include finalisation of North Macedonia’s Nato accession process, the launch of the EU accession negotiations, economic development and judicial reforms.

There are many familiar faces in the new cabinet. Deputy prime minister for economic issues Koco Angjusev, who also resigned, will be replaced by ex-labour minister Mila Carovska. In turn, Carovska’s position will be taken by Rashela Mizrahi, appointed by VMRO-DPMNE. Nake Culev from VMRO-DPMNE will replace Spasovski as the new interim interior minister.

Other ministers kept their positions, but several deputy ministers will be appointed by VMRO-DPMNE.

Zaev led efforts to strike a deal with Greece and end the long dispute with Athens that had stymied Skopje’s efforts to join the EU and Nato. Under the deal, the name of the country was changed to North Macedonia, which has already opened the way for the country to become a Nato member and to progress towards EU accession. The name deal indeed helped Skopje to sign a Nato accession protocol in February 2019, but the EU decision on the launch of accession talks was delayed. The issue will be re-opened during the next EU summit in May 2020.

In the meantime, Spain is the last country that still has to approve North Macedonia’s accession protocol with Nato, which is expected later this month. The finalisation of the Nato accession process is expected before the election.

Both the ruling Social Democratic Union of Macedonia (SDSM) and opposition VMRO-DPMNE hope they will win the upcoming election. However, the latest opinion polls showed the SDSM is trailing VMRO by several percentage points.

“I call on the opposition to be held accountable and not to abuse this transitional period,” Zaev said in a tweet.

The country’s last general elections were held in December 2016, but the government led by Zaev only took office in May 2017.

Croatia, which took over the six-month EU presidency at the beginning of this month, pledged it will work to help North Macedonia and Albania to obtain dates for the launch of membership talks during its presidency.

COMMENT: Why the Balkan region should be on investors’ radar screens
COMMENT: Interest rates during the pandemic. Going negative?
North Macedonia’s ruling SDSM and DUI close to agreement on new government