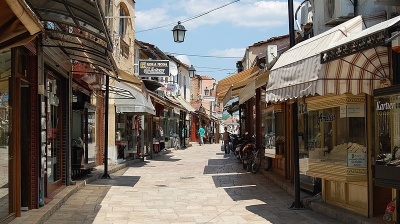 Skopje old town (pictured) could get Amsterdam-style coffee shops if cannabis is decriminalised.
By Valentina Dimitrievska in Skopje November 19, 2020

North Macedonia has opened a public debate on the decriminalisation of marijuana, after it legalised medical cannabis in 2016.

Earlier this month Social Democrat Prime Minister Zoran Zaev said that he support the decriminalisation, but also legalisation of cannabis consumption saying that this will help the tourism and hospitality industry in the country.

Justice Minister Bojan Maricic, speaking at the International Conference on Drug Regulation Models organised by local NGOs Coalition Margins and HOPS, said it is good that a wide-ranging public debate on the issue has been launched, adding that good laws are needed to avoid “chaos” in the sector.

According to Maricic, high-quality regulation in the decriminalisation can bring more benefits to the country in terms of regulation of marijuana trade, reducing crime and economic benefits, especially in tourism and hospitality, Sloboden Pecat reported.

Maricic said that in addition to experts, the debate should include NGOs and civil associations.

If to makes the decision to decriminalise marijuana, North Macedonia will be the first Western Balkan country to do so. In the wider region, only Slovenia and Croatia have decriminalised the use of cannabis.

Zaev said on November 11 that consumption of cannabis will be allowed in all catering facilities that receive licenses, which would definitely help the development of the service sector in the country.

North Macedonia, previously known as Macedonia, legalised the use of cannabis extracts for medical purposes in 2016, which led to the opening of a number of factories for the production of cannabidiol CBD products.