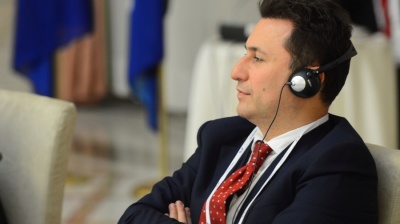 By Valentina Dimitrievska in Skopje July 28, 2021

North Macedonia’s former prime minister Nikola Gruevski, who fled to Budapest to avoid serving a prison sentence, has set up a company in Hungary, Hungarian media reported on July 28.

Gruevski fled to Budapest in November 2018 after he was sentenced to two years in prison for influencing officials to buy a luxury Mercedes from state funds causing damage to the budget of €600,000. He disappeared a few days before he was supposed to go to prison and was granted asylum in Hungary.

The company called I.C.I.C. Kft is headquartered in Pecel, a suburb of Budapest. Gruevski is the owner and director of the company, which was registered on July 15, according to Hungary’s 24.hu.

The main activities of the company include business management and consulting, but also wholesale of porcelain, glassware and cleaning products, and event organising.

Although Gruevski has been living in Hungary since November 2018 after receiving asylum there, he gave his home address in Skopje as his place of residence.

In 2019, Hungarian Foreign Minister Péter Szijjarto admitted that he meets regularly in his office with Gruevski to consult on Western Balkan issues.

Gruevski was a former leader of the conservative VMRO-DPMNE party and prime minister from 2006 to 2016, one year before the Social Democrats came to power. He is also on trial on other corruption charges in North Macedonia.

In May 2019, the mandatory immunity issues’ commission of North Macedonia’s parliament decided to take away Gruevski’s MP mandate after he fled the country, due to his unjustified absence from work.

In June 2019, Hungary turned down North Macedonia’s request to extradite Gruevski saying that extradition conditions were not met.

It was reported that Gruevski arrived in Budapest via Albania, Montenegro and Serbia in a car owned by the Hungarian embassy in Tirana. He said at the time that he fled to Hungary after being warned that he would be killed in prison.

Gruevski accused the Social Democrat-led government of political persecution, wanting to put him in prison using undemocratic methods and abusing the prosecutorial and judicial system in Macedonia.

Gruevski and his party had been firmly entrenched in power for years when then opposition leader and now PM Zoran Zaev released wiretapped conversations, which revealed corruption among top officials including Gruevski and former ministers. This sparked a political scandal and mass protests in 2015. Under the EU-mediated Przino Agreement Gruevski agreed to resign and left his post in January 2016.

Hungarian PM Viktor Orban and Gruevski have had a long-standing political friendship. Orban was a regular guest at the electoral rallies of Gruevski's party and expressed strong support for him and his policies. Both have waged campaigns against Hungarian born philanthropist George Soros.

Gruevski's first cousin is Saso Mijalkov, a former chief of the secret police, who is now in detention, after receiving a 12-year prison sentence from a Skopje court in a high-profile illegal surveillance case "Target-Fortress" in February2021.

In April, Mijalkov was sentenced to another eight years in prison for illegally purchasing wiretapping equipment in a case known as "Trezor" ("Vault").

The Skopje criminal court turned down a bail offer for his release of nearly €11mn as guarantees.

Several former ministers from now opposition VMRO-DPMNE and close associates of Gruevski, including ex-transport minister Mile Janakieski and ex-interior minister Gordana Jankulovska, as well as other VMRO-DPMNE officials currently are serving prison sentences due to their involvement in corruption scandals.