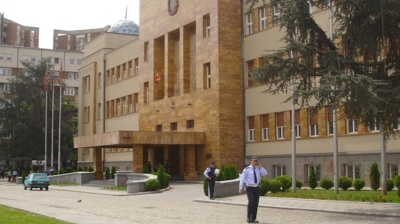 Coalition expected to be formalised after August 4 when the first post-election parliament session will be held.
By Valentina Dimitrievska in Skopje July 29, 2020

The formalisation of the coalition will take place after August 4 when the first parliament session will be held, Albanian language daily Koha reported, quoting its sources.

The ruling SDSM gained a slim victory in the elections, with two more seats than the opposition conservative VMRO-DPMNE (46 versus 44). The biggest ethnic Albanian party, the DUI, led by Ali Ahmeti, has effectively been made kingmaker by the election, winning 15 seats in the 120-seat parliament  It says it wants the next prime minister to be an ethnic Albanian and has proposed former politician Naser Ziberi as its candidate.

Both the SDSM and VMRO-DPMNE claim they will manage to form the new cabinet following the elections, most likely in coalition with the DUI.

However, according to Koha, the SDSM, which participated in the election in coalition with ethnic Albanian party Besa, has reached a framework agreement to make a new government coalition with its previous partner the DUI as well as with the Democratic Party of Albanians (DPA), which has just one seat in the parliament, making a parliamentary majority of 62 deputies.

Koha reported unofficial information that according to the agreement between the parties, the prime minister position will be rotating, three years for the SDSM and one year for the DUI.

The new coalition will mean that the country will stay firmly on its EU path and continue with EU-related reforms, as well as sticking to the implementation of previously reached key political deals – the Prespa name deal with Greece, the Friendship Treaty with Bulgaria and the Tirana Platform which relates to ethnic Albanian political demands.

How the discussions with the DUI will develop is still uncertain as earlier this month Ahmeti was summoned for questioning at The Hague-based war crime court for his role in the militant group Kosovo Liberation Army (KLA).

Ahmeti is the first politician from North Macedonia to be summoned by The Hague-based court. After the Kosovan war, Ahmeti was a leader of the KLA’s wing in Macedonia, the National Liberation Army (NLA) that launched a conflict in 2001 fighting with the Macedonian army and police.

The hacker group AnonOpsMKD, which claimed that it attacked news aggregator Time.mk on North Macedonia’s election day, warned of “chaos” in the country if parties allow the appointment of an ethnic Albanian prime minister.