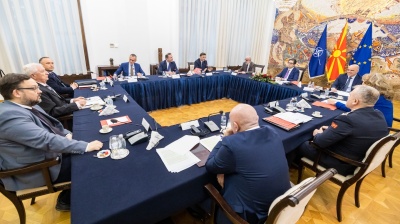 North Macedonia’s President Stevo Pendarovski said on January 23 that Russian intelligence services are behind an “anti-state campaign” in the country, which has caused its fragile relations with Bulgaria to deteriorate.

Pendarovski claimed that “organised structures” from Bulgaria linked to Russian intelligence first became active in July 2022, when Bulgaria lifted its veto on North Macedonia’s EU integration. They continue to elevate tensions between the neighbouring countries at a time when the government in Skopje is trying to push through controversial changes to the constitution to enable its EU accession talks to proceed.

Pendarovski made the comments following a Security Council meeting that tackled relations with Bulgaria and the increasingly frequent incidents between the two countries. He said that the EU agenda and bilateral relations are victims of “anachronistic nationalist and populist policies” on both sides.

“Organised structures from Bulgaria that carry out anti-state campaigns against North Macedonia are connected to the Russian intelligence service,” Pendarovski said, answering a journalist's question.

“I cannot go into details because it is a matter of sensitive issues,” he added.

In July 2022, North Macedonia accepted a bilateral protocol with Bulgaria, which opened the way to start the long-awaited EU accession talks. Before that Sofia vetoed the start of North Macedonia's EU accession process over language, cultural and history issues.

However, even though the EU negotiation process has started, for it to continue, North Macedonia has to change its constitution to include the ethnic Bulgarian minority — a condition set by Sofia for allowing the second intergovernmental conference to take place.

This is a controversial step, not least because ethnic Bulgarians make up less than 0.2% of the total population, in the constitution. This is strongly opposed by the opposition VMRO-DPMNE and the Left party.

Specifically, Pendarovski warned of high security risks around the public holiday marking the birthday of Goce Delcev, a revolutionary who fought for an independent Macedonia at the end of the 19th and the beginning of the 20th century.

“These same structures have already been mobilised, both logistically and financially, to support the organised arrival of a large number of people in Skopje on February 4, when we commemorate the birthday of Goce Delcev,” Pendarovski said.

Delcev became a stumbling block in the discussions of the Bulgaria-North Macedonia joint history commission, as Bulgarian historians claim that Delcev was a Bulgarian national. They want this to be written in North Macedonia’s history textbooks, which the Macedonian side rejected.

The president also urged the Bulgarian authorities to politically isolate people who do not want good neighbourly relations.

He proposed to the government in Skopje to ban the entry of Bulgarian MEP Angel Dzhambazki and several other Bulgarian citizens to North Macedonia because of their “hostile actions” in the country.

Dzhambazki recently came to Skopje with a group of Bulgarians to mark the death of controversial historical figure Mara Buneva and publicly delivered a speech containing territorial claims.

Dzhambazki is a far-right Bulgarian MEP from the Conservatives group and a member of Bulgaria’s nationalist VMRO party. He is known in North Macedonia for his anti-Macedonian views, publicly declaring that the country is part of Bulgaria.

In the latest incident, Dzhambazki came to Skopje with a group of people and gathered downtown to mark the death of Buneva. Buneva is a controversial figure who is considered a heroine in Bulgaria because of her assassination of a Serb official back in 1928. At that time, Macedonians were fighting for independence, and the Bulgarian state wanted to use the circumstances to annex the remaining Macedonian territory and make it part of Bulgaria.

“Eternal memory of Mara Buneva and all known and unknown heroes who dedicated and gave their lives for the cause of free Bulgarian Macedonia and united Bulgaria,” Dzambaski said on January 14 in Skopje.

The authorities in Skopje asked Sofia to denounce Dzhambazki’s statements. Their relatively mild reaction was probably due to fears that a harsher response would worsen relations with Sofia ahead of the crucial vote in the parliament on the constitutional changes.

The Bulgarian foreign ministry said that provocations are unacceptable and counterproductive, and added that Dzhambazki’s statement does not represent the official position of the Bulgarian state.

This was not an isolated incident. Back in March 2021, in a video clip posted on Facebook as part of his general election campaign, Dzhambazki referred to North Macedonia’s authorities as “interim administrators of our, of my Macedonia”.

“Macedonia is Bulgarian and Bulgaria is above everything,” he concluded in the video, which was recorded in North Macedonia's capital Skopje and the lakeside city of Ohrid.

Diplomatic tensions with Bulgaria have increased in the last few days after Hristijan Pendikov, a secretary of the Tzar Boris III Bulgarian cultural club in Ohrid, was beaten by three people in a café bar on January 19. He was seriously injured and sent to the local hospital. The day after the incident, the Bulgarian authorities sent a government plane with a medical team to Ohrid to take Pendikov for treatment in Bulgaria.

The Bulgarian authorities took the incident seriously and set the entire state apparatus in motion to deal with it. Sofia accused North Macedonia of violating the rights of ethnic Bulgarians, and there have also been threats to block EU negotiations again.

North Macedonia’s Foreign Minister Bujar Osmani visited Pendikov in Sofia in a move to show that the authorities are doing their best to maintain good relations. Osmani condemned the attack and said that the state will make sure that perpetrators face justice.

However, he mentioned the country will not allow provocateurs to spread hatred against Macedonians again, referring to the Dzhambazki incident.

Bulgarian media reported that Pendikov was insulted and beaten because he was ethnic Bulgarian.

But the media in North Macedonia checked the facts and found out that the fight actually was a private matter and that Pendikov and the other participants in the fight have a history of incidents and previous misunderstandings, which have nothing to do with politics.

They also found out that Pendikov had been in trouble with the local police in Ohrid for possession and distribution of cocaine, as detailed in a police bulletin from December 17, 2022.

Pendikov’s Facebook profile clearly shows that he was once a zealous activist for North Macedonia’s opposition VMRO-DPMNE. There was a photo featuring Pendikov waving a Macedonian flag in a crowd during previous VMRO-DPMNE protests. This appeared alongside an article published by AP with the headline “Conservatives protest in Macedonia, demand early elections” in 2018.

There were several photos of Pendikov with VMRO-DPMNE’s leader Hristijan Mickoski, but also one with Dzhambazki from September 2022.

While Bulgaria sees a political background to the incident, in North Macedonia is unclear how Pendikov made the transition from a hardline Macedonian patriot and staunch VMRO-DPMNE supporter to a Bulgarian who activated the Bulgarian state to help him in a private matter.

Top officials from Skopje do, however, seek an end to the provocations that have worsened relations between the neighbouring countries.

“This vicious circle of provocations that ends in violence is something we must stop,” Osmani said in Sofia.