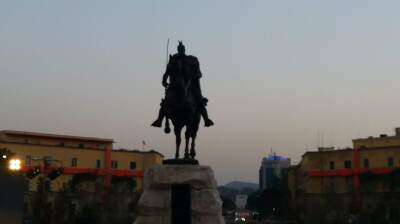 Bashkim Fino, former Albanian prime minister and economist, died of coronavirus (COVID-19) on March 29, at the age of 58.

Tributes poured in from figures from across the political spectrum for Fino, who was appointed to lead the national unity government when the country came close to civil war in 1997.

The situation was precipitated by the failure of huge pyramid schemes that drew in investments from around two-thirds of the Albanian population in the early years of transition, amounting to an estimated $1.5bn. When the schemes abruptly collapsed in January 1997, causing severe losses for the already impoverished population, Albania swiftly descended into chaos.

Mass protests broke out, and erupted into a full-scale rebellion concentrated in the south of the country, with local government offices occupied and looted. Albania’s then president Sali Berisha opened weapons depots for citizens of the north and central of the country to defend themselves; depots in the south were looted. Around 3,000 people died in the violence.

In an attempt to restore order, Berisha appointed Fino, of the then opposition Socialist Party, to head the government until new elections could be organised.

When the election took place, the Socialists won a majority, after which Fino stepped down as prime minister, being replaced by party leader Fatos Nano.

Fino was serving as an MP when he died. An ardent football fan, three years ago he pledged to give up his political roles should he be elected head of the Albanian Football Association. The position instead went to the incumbent Armand Duka, despite claims by Fino that the process had been rigged.

According to local media reports, Fino died in hospital on March 29, after contracting coronavirus.

The government declared March 29 a day of national mourning, and campaigning for the April 25 general election was suspended.

“Today for our big family is a mourning day, our electoral activities will stop, in honour of our beloved brother,” the Socialist Party wrote on Facebook.

“This is a very sad morning, after the departure of a good and kind man, a precious socialist, like Bashkim Fino. Albanians will never forget that, in one of the most difficult moments of the country, he was there, with his wisdom!” wrote Tirana mayor Erion Veliaj.

Fino also received tributes from opposition politicians, with Democratic Party leader Lulzim Basha writing: “I sadly learned the news of the death of former prime minister, former minister and former MP Bashkim Fino. I am convinced that the contribution of Bashkim Fino in Albanian politics will always be appreciated as an important voice for the political & social stability of the country.”

Meanwhile, the US embassy in Tirana extended condolences to Fino’s family, friends and colleagues. “Mr. Fino will be remembered for his leadership, at a very young age, of Albania's National Reconciliation Government during the difficult year 1997 as well as for his contributions to the law-making process during his extensive political career. May he rest in peace,” said the statement.