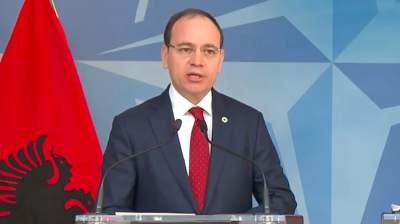 Bujar Nishani at a joint press conference with Nato Secretary General Jens Stoltenberg in 2016. / Nato
By bne IntelliNews May 28, 2022

Nishani, who served as president from 2012 until 2017, is the first of Albania’s post-communist presidents to pass away.

While no details were released about Nishani’s death, according to media reports he had recently travelled to Germany for treatment for a liver problem.

Nishani was born in the port city of Durres. He graduated from the Skanderbeg Military University and later from the University of Tirana law faculty. In his early career, he worked at the military academy and the defence ministry. He became an MP in 2005, later serving as interior minister.

A member of the Democratic Party, which was in power at the time, Nishani was elected president in June 2012 at the age of 45 — becoming the country’s youngest ever president. He was elected by the Democrats, with the opposition boycotting the vote.

“The sun set forever for former President Bujar Nishani!” wrote Sali Berisha, who was recently reelected as the head of the Democratic Party, on Facebook.

“Former President Bujar Nishani was an icon of the highest moral values of man, honesty, patriotism and dedication. He was a distinguished citizen, who represented the nation and Albania with special dignity and wisdom in the international arena, giving honor and value to the institution of the president, the state and the Albanian citizens.”

Albania's president is mainly a ceremonial post, but does have the power to hold up legislation and appoints the head of the secret service and the prosecutor general.

After the rival Socialist Party won the general election the following year, Nishani occasionally used his veto power to influence key legislation on issues including judicial reform and waste imports.

Nishani spoke to bne IntelliNews in an interview in 2016, when he talked of the need for a more open political dialogue and better coordination between ruling and opposition parties.

On the economic front, Nishani said he believed that tourism, transport and agriculture hold great potential. However, he warned of the need to create a brand for Albania’s offering and its agricultural exports, as well as to train hospitality workers and farmers in how to market themselves and to attract customers from abroad.

On the subject of corruption, Nishani commented: “We cannot overcome corruption overnight, it is a process that will require time. So we have to focus on mechanisms that will ensure the long-term success of our fight against it, such as stronger institutions, an independent judiciary and cultivating our human capital.”

In March 2017, Nishani became the first Albanian president to visit Serbia for almost seven decades, when he visited Presevo and Bujanovac, two municipalities in southern Serbia populated mainly with ethnic Albanians. The previous visit was made by Albanian communist leader Enver Hoxha in 1948.

The aim of Nishani’s visit was to promote better understanding and cooperation between Albania and Serbia. In the years since then, the two country have enjoyed a rapprochement, and were co-fonders of the Open Balkan initiative alongside North Macedonia.

After his term came to an end, Nishani was succeeded as president by Albania’s current President Ilir Meta, from the ranks of the Socialist Movement for Integration (LSI), at that time the Socialist Party’s junior coalition partner.

“With deep sadness and grief I received the news of President Bujar Nishani's passing away,” Meta wrote on Facebook on May 28.

While Nishani has kept a relatively low profile since the end of his presidential term, he weighed into the debate within the Democratic Party after its third consecutive general election defeat in April 2021. Nishani said after the vote that the party’s then leader Lulzim Basha should have shouldered at least some of the blame. In his speech on May 16, Nishani talked of the Democrats’ despair and disappointment after the loss of the election to a “gangster regime”, but said that the party must also take part of the responsibility for its failure to win.