OPEC+ tiny production increase is a slap in face for Biden 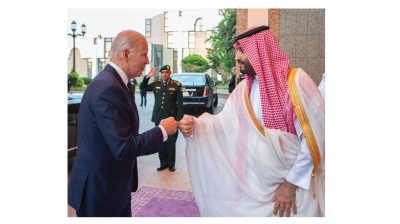 US President Joe Biden's fist bump with Saudi Arabia's Crowned Prince Mohammed bin Salman Al Saud hides rising tensions between the two as the prince attempts to play Russia off against the US. / wiki
By Ben Aris in Berlin August 4, 2022

Arab oil exporters responded to a visit by US President Joe Biden to the region in July with the smallest increase in quotas in history – just 100,000 barrels per day at an OPEC+ meeting in Vienna on August 3.

Biden met with Crown Prince Mohammed bin Salman Al Saud (MbS) of Kingdom of Saudi Arabia (KSA) and was all but humiliated by him.

After MbS met Biden as he arrived with the now famous “fist bump”, the prince led the president into the hall for talks. Although not widely reported by the western press, the Russian press at the event reported that Biden was forced to walk past a photo exhibition of prisoners being tortured at the infamous Abu Ghraib prison in Iraq.

The tiny production cut is more of the same. Analysts have not hesitated to call OPEC’s decision "a slap in the face [to] the Biden administration."

Relations between the US and KSA have soured in recent years, as the importance of the Kingdom has waned in proportion to the rise in the US domestic shale oil industry. Relations took a further hit after the murder of journalist Jamal Khashoggi in a Saudi embassy in Turkey that brought down international condemnation on Riyad (hence the fist bump rather than a handshake).

OPEC retaliated to the change in the oil market in 2014 by attempting to collapse the price of oil and make the US shale producers economically unviable, but the attempt failed as production costs at US wells fell and marginal fields were closed down.

In parallel with the deteriorating relations with the US, those with Russia have blossomed. Russia has long avoided working with OPEC, but that strategy has changed in recent years and Russia has become an active member of the OPEC+ club and co-ordinates with the Middle Eastern members to control oil prices. Moreover, Arab investment into Russia in regions like Kazan has taken off as the governments of Russia and leading Arab countries continue to co-operate on joint investment projects, many of which are co-ordinated with the Russia Direct Investment Fund (RDIF), Russia’s sovereign wealth fund.

KSA, like many non-G7 countries, has been taking advantage of the break in East-West relations to play the middle ground as both Washington and Moscow come knocking looking for support in their mutual campaigns to isolate the other.

There are objective reasons for the small increase in production as well. The majority of OPEC+ members cannot meet the existing quotas, reports The Bell, and prices are falling even without decisive action by exporters on fears of a recession in the US and other major economies. A barrel of Brent cost $97 on August 3, down by $20 since the start of the year.

At the meeting of OPEC+ energy ministers in Vienna, the alliance members, led by Russia and KSA, approved a new increase in oil production quotas of only 100,000 barrels per day (bpd). For comparison, in July-August, OPEC+ raised output by 648,000 bpd every month. The current increase is the lowest since 1986 in absolute terms, and in percentage terms is the smallest in the history of the cartel, writes Bloomberg.

This OPEC+ meeting is the first since the end of a production freeze deal approved in April 2020 at the peak of the coronavirus (COVID-19) pandemic. The OPEC+ members agreed to remove 10mn bpd from the market in order to reverse the collapse in prices due to the collapse in global demand due to lockdowns and then restore production gradually over two years.

The last two increases in July-August of this year brought quotas back to pre-pandemic levels, but these are only the official quotas. The actual production lags behind by 3mn bpd, The Bell reports, citing the latest available production data. The main laggards are Nigeria, Angola and Russia.

There are only two countries that can increase output in line with the new official quotas: KSA and the United Arab Emirates (UAE), according to Bloomberg. Their upside production capacity is limited, but they still have some room for increases. KSA’s quota for August is a total of 11mn bpd and actual volume of production in June was 10.65mn – a record by historical standards.

Russia’s oil production has also recovered from a temporary fall following the start of the war in Ukraine in February and two months of self-sanctioning by oil traders, and reached 10.7mn bpd in June, slightly down from the approximately 11mn bpd it was churning out at the start of this year. US production climbed to a record 12.1mn bpd in June.

MbS told Biden that KSA doesn’t have much more production capacity, but according to its oil monopoly Saudi Aramco, the peak production capacity is 12mn bpd, but it says that KSA will only be able to maintain this level of production for a few weeks at most. The International Energy Agency (IEA) estimates the total potential for increased production in the Middle East at 2mn bpd and the August 3 decision will allow KSA to expand output by no more than 30,000 bpd in real terms, with the UAE adding another 10,000 bpd, reports The Bell.

Even that increase is in doubt, as KSA has long followed the policy of keeping some production capacity in reserves to cope with unforeseen events.

Biden tried to paper over the cracks with gifts. The US approved a $3.05bn arms sale to KSA on the same day as the OPEC meeting in Vienna, but to no effect, it seems.

Washington to a large extent has lost KSA to Russia, where relations are increasingly warm. In the past the Middle East has been very reliant on US arms sales, but in the last years Russia has made inroads and taken its own market share of the arms business. Moreover, with the global superpowers of Russia, China and US on a collision course, the non-aligned countries of the world are keen to stay out of the fight. In practice that means keeping Washington at arms length while maintaining cordial relations with Moscow. Moreover, in this case both Riyadh and Moscow are interested in keeping prices high, whereas Washington wants to see them come down.

And the question of oil prices will only grow in importance ahead of the EU deadline to cut off Russian crude imports entirely by December 5 and refined products by February 5 next year as that part of the sanctions regime comes into full force. The Central Bank of Russia (CBR) has warned that the fall in revenue from this could hit the Russian economy hard as well as the budget.