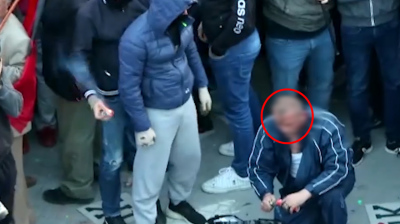 Police photograph Molotov cocktails being prepared for use during the May 11 opposition protest in Tirana.
By Hugo F. H. Stride in Tirana June 28, 2019

On June 18, Johannes Hahn — the European Union’s reliably dour retailer of inconvenient Commission decisions — told reporters gathered in Luxembourg to hear the European Council’s decision on the start of accession talks with Albania and North Macedonia that “in light of the limited time available and the importance of the matter, the council will revert to the issue with a view to reaching a clear and substantive decision as soon as possible and no later than October 2019”.

While it is tempting to blame Hahn for the European Union’s lack of progress in the Western Balkans, success was never really an option. Four months prior to Hahn’s November 2014 confirmation as Commissioner for Enlargement and European Neighbourhood Policy, the newly minted President of the European Commission, Jean-Claude Junker, primed parliamentary delegates on the strictly titular — if grandiloquent — remit he foresaw for Hahn, by stating “there will be no new enlargement in the next five years”. While it’s a given that Hahn has remained strictly task orientated — he has achieved almost nothing — the European Union’s unwillingness to shoulder responsibility in the Western Balkans has not come without consequence.

North Macedonia, which made remarkable progress through 2018, will remain alienated on the club’s doorstep until October. Albania isn’t only experiencing negotiation malaise. The capital, Tirana, is literally in flames. Irrespective of the goals determined by the member states, it is difficult to find any moral rectitude in a stalling process Hahn has termed “unfortunate”. There are geopolitical and strategic benefits to excluding the Western Balkans from this discussion — but as Europeans, we must strongly rebut the absence of morality shown by our elected representatives to the plight of fledgling democracies in eastern Europe. Once the smoke has cleared in Tirana, we must not be surprised if the people of the Western Balkans have lost interest in accession negotiations. If we do not recognise that North Macedonia, Albania, Montenegro, Bosnia, Serbia and Kosovo were never given a legitimate place in our union, or even a fair negotiating position, we will be complicit — in our inertia, and indifference — for the regimes which rise from the ashes of failed diplomacy. We must also accept that those regimes may well make very different decisions from those of the democratic governments which they violently depose.

A strong illustration today, June 28, is that of former Albanian Democratic Party leader, Lulzim Basha — a former transport minister acquitted on a technicality in 2009 for the disappearance of €600mn on an infrastructure project, presently subject to litigation in Tirana for lobbying payments made to US Republican Senator Ted Cruz’s former adviser, Nick Muzin, of approximately $600,000. Basha has existed in the hinterland of populist politics since 2014, emerging only briefly from the wilderness to be photographed with US President Donald J. Trump — one alleged deliverable he sought from the same US lobbyist. Despite a career overshadowed by corruption allegations, Basha has attempted to piggyback on the EU’s lukewarm support for Tirana throughout his career in opposition. This March, Basha accused the Commission of showing leniency for Prime Minister Edi Rama’s government, solely “for the sake of stability”.

Facing almost inexistent pressure from Brussels to halt the violent protests which have left dozens injured since April, Basha set about dismantling the country’s democratic institutions. Basha was assisted in these endeavours by President Ilir Meta, who attempted to postpone elections which will take place on June 30 until October. The European Union could have pulled rank on this violence. Hahn, and others, could have strongly asserted their praise for the reforms brought to pass since negotiations began with Tirana. The commission could also have reiterated its support for Albania’s legitimate and democratically elected opposition leader Rudina Hajdari. Instead, the silence grew painful. A succession of ranking Bundestag representatives — including former agriculture minister Christian Schmidt — voiced their support for Basha’s decidedly violent slant on representative democracy. Wire-taps of unestablished veracity, which were leaked to the redoubtable German newspaper Bild, echoed like tinnitus in the twilight, as the Bundestag delayed its own decision. Yet others, particularly in the representative states which comprise the European Union, recognised the folly of failing to condemn authoritarianism, and offer support — even cautiously — to the democracies of the Western Balkans.

One such person was Michael Roth, secretary of state for Europe at the German foreign ministry, who carefully cited the extent of progress achieved, in a letter addressed to the Bundestag, recommending that the German government open talks. Roth’s letter is notable as an example of the power of diplomacy, when delivered with a clean eye for the past which the Western Balkans has overcome, and hurdles breached by belief in a shared struggle. Roth’s words — perhaps unsurprisingly — carry far more water than Bild’s. In fact, anyone who cares to read the Commission’s advice on opening talks with Skopje and Tirana will find a great many good things to report. “In the case of Albania, I would particularly like to emphasise the deep achievements and underline an unparalleled judicial reform [effort],” Roth states. “Albania has made significant progress, particularly in its judiciary system.”

Europe — and true Europeans — do want the Western Balkans to benefit from the same democratic principles which we consider self evident. As Article 49 of the Maastricht Treaty (as amended) asserts, any European state that respects the "principles of liberty, democracy, respect for human rights and fundamental freedoms, and the rule of law", may apply to join the union. An equally impressive quote may be found in a far more obscure letter, addressed to Hahn, by Junker — detailing the remit for his appointment. For purposes of juxtaposition, Junker’s words to Hahn seem worth carrying in full. “The European Union has come through one of the most testing periods in its history. The effects of the economic and financial crisis are still causing great hardship in many parts of Europe. We live in a Union with a 29th state of unemployed people, many of them young people who feel side-lined. Until this situation has changed, this 29th state must be our number one concern, and we have to be very determined and very responsible in carrying out our work as Members of this Commission.”

We must show through actions, and not words, that the Western Balkans can truly be our 29th state. There is only so much silent complicity and humiliation which the proud people of this ethnically diverse and geopolitically significant young region can take.

Hugo F. H. Stride is a former UK diplomat, and now advises the government of Albania on electoral reform and EU accession as a senior partner at NBE Global Strategies.

Tourists trickle back to the Adriatic