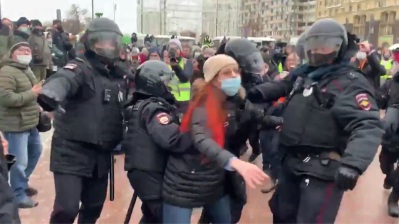 Police arrest a young woman on Pushkin Square in central Moscow ahead of mass protests in support of opposition activist Alexey Navalny.
By Ben Aris in Berlin January 23, 2021

As the sun comes up over Vladivostok and the dawn in Russia sweeps west, it is already clear that anti-corruption blogger and opposition activist Alexei Navalny's call for mass protests today has been a success. Thousands of people have taken to the streets in brutally cold weather in support of the jailed activist and police have already begun arresting people, in shades of the beginning of the popular uprising in Belarus.

Navalny was arrested on his return to Russia last weekend after spending five months in Germany recuperating from a poison attack from the military-grade nerve agent Novichok.

The next day he threw down the gauntlet in front of the Kremlin, calling for unauthorised mass protests on January 23. During the rest of the week Team Navalny, his unofficial organisation, sprang into action posting meeting times and places in some 90 towns and cities across Russia – sparking the biggest public protest Russia has seen since at least 2011, and even that protest was largely concentrated in Moscow.

“Protests demanding the release of Alexey Navalny are planned today in 90 cities across Russia. There seem to be quite modest turnouts so far in the Far East cities of Vladivostok, Khabarovsk, Chita and Yakutsk but focus will be on Moscow and Peter,” tweeted bne IntelliNews contributor, Jason Corcoran, from Moscow.

As of 10am CET there were reports of 237 arrests in over 30 cities and the biggest protests in western Russia in Moscow and St Petersburg had yet to begin.

Ministry of the Interior troops had already been active a day earlier arresting organisers, members of Team Navalny and other high-profile opposition leaders ahead of this weekend's protests.

The authorities also called for social media sites like the Chinese TikTok to be closed down for inciting the youth to take part in illegal protests. Russian teenagers enthusiastically took to the airwaves in recent days giving advice on how to avoid arrest during the protests and what demonstrators should wear in the freezing temperatures.

It is increasingly clear that Navalny has initiated a well-thought-out strategy for his return. Part of it saw Navalny, at a point where he had hardly been in jail for 24 hours, drop a bomb of revelations on the Russian public: a two-hour-long documentary on his investigation into the corruption network surrounding President Vladimir Putin. It garnered over 50mn views in less than two days, making it his most widely viewed video yet.

The mass demonstrations echo those that broke out after the disputed presidential elections in Belarus on August 9, when crowds violently clashed with Belarus’ OMON riot police in several days of street fighting that led to at least six deaths.

While Russians are unhappy with President Vladimir Putin after six years of declines in real incomes, the level of discontent is no way as high as in self-appointed Belarusian President Alexander Lukashenko’s brutal neo-Soviet regime, and income levels in Russia remain by far the highest in the Commonwealth of Independent States (CIS), on a par with the lower part of the EU.

Analysts for the most part do not expect widespread protests to continue, but these protests are the largest seen in years and the Kremlin runs the risk of radicalising the population if its response is too brutal, as has happened in Belarus, which is now into its sixth month of continued street protests.

bne IntelliNews columnist Mark Galeotti ran through the challenges both Navalny and the Kremlin face as a result of today’s protests in a thread on Twitter, saying it could prove to be a crucial event that will set the tone for the protest movement going forward.

Below is a selection of videos posted on social media showing the crowds and some of the arrests already taking place in various regional cities around the country.

As dawn sweeps westwards across Russia and protesters and OMON get to do their thing, the q arises of just what constitutes ‘success’ for both #Navalny and the Kremlin. An early morning thread 1/

Obviously, one day of action will neither get Navalny free nor break his movement. Rather, it is about defining what kind of struggle this will be 2/

For Team Navalny, it is about the numbers coming out, the spread of places they come out, and at least as important, what kind of people come out. Can they use it to demonstrate a broadening of their support base? 3/

They don’t need to reach Bolotnaya numbers to claim success, certainly not for a 1st day of protests: tens of thousands in Moscow is enough, esp if – as seems the case – they can also point to protests all across the country 4/

As big a challenge as getting people on the streets today is managing expectations and having a strategy tomorrow onwards. A big march and some chants are fine, but what then? It has to be 100% clear this is just part of the start of something long-term 5/

If Navalny’s extraordinary brave act of returning is to mean something, it has to be used to further building a national movement + making ‘smart voting’ part of national conversation 6/

It’s also a chance to challenge but also build bridges to ‘systemic opposition’ and get them – or at least individual members, local orgs, etc – to decide if they are more ‘systemic’ or ‘opposition’ 7/

For the Kremlin, it depends how it has decided to play the day, which in turn will tell us much about how far we are witnessing an ‘authoritarian turn’ overall following the poisoning, which def went beyond past practice 8/

They can focus on managing the day: still enough arrests to signal the risks in participation, but essentially hope to ride out the protest moment. This is what they have largely done in the past. Or… 9/

I am not convinced Kremlin has deftness of touch and control to calibrate that kind of violence accurately without risking a kind of Bloody Sunday - + I suspect PrezAdmin feels the same. Violence will mean hawks like Zolotov listened to more than Vaino etc 11/

This would much wider consequences for everything from state/region relationships to whether the Duma elex will have to be totally rigged. I suspect this risk-averse Kremlin will hold back or maybe allow itself one day of rage then retreat 12/

On international dimension, lots of talk of sanctions, both based on #Navalny’s own list, as released by @vashurkov, and of others, but that in itself is not enough. 13/

I’d *also* like to see diplomats accompanying marchers in hope moderates state behaviour and esp media crews covering protests. If the state’s response is esp violent, then there absolutely have to be additional consequences targeted on the people concerned, top to bottom 14/

Here, ironically, response to #Belarus may give us some pointers. Punish law enforcement + security hierarchy; identify worst offenders on ground; track chain of command (who gave what orders?); provide concrete assistance to those arrested. 15/

After all, what happens today and as a result of today doesn't just set the tone and strategy for Team Navalny and for the Kremlin, but also for the West. A weak reaction to heavy-handedness today also undermines efforts to shield Navalny and empowers hawks. 16/

A desire to make progress on big issues such as arms control + fear of Kremlin’s standard policy of angry tit-for-tat cannot be allowed to hold Western response hostage. Or things like Navalny poisoning + wider repression will happen again and again… /end