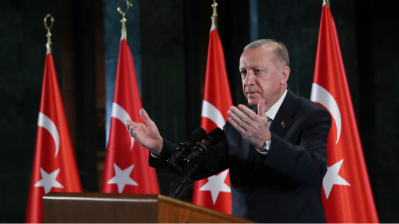 Turkey’s main opposition party on November 24 said the country was facing an unprecedented “catastrophe” amid the collapse of the Turkish lira.

Analysts have described the trigger for the currency disaster—President Recep Tayyip Erdogan’s insistence on rate cuts at a time when the market is demanding rate hikes given Turkey’s very high inflation—as “insane” and Kemal Kilicdaroglu, leader of the Republican People's Party (CHP), in taking aim at Erdogan, said: "There has not been such a catastrophe in the history of the Republic. At this point, you are a fundamental national security problem for the Republic of Turkey."

The CHP and other opposition parties have called for early elections. Erdogan, who must stand for re-election by June 2023, responded that it would be “primitive” to hold elections every 15 to 20 months.

The Turkish lira (TRY) at one point on November 24 fell as much as 15% to its latest historic low of 13.465 versus the USD. It is on the longest losing streak in 20 years, but Erdogan appears to be keeping up the pressure for even more rate cuts, pushing his unorthodox theory that rate hikes push up inflation, widely derided by economists. Erdogan contends that a weaker TRY will boost exports, investment and jobs, but critics say it will further fuel double-digit inflation, with some observers believing Turkey has already entered a hyperinflationary cycle. The erosion of the lira, meanwhile, will also cut deeply into Turks' earnings and savings in the domestic currency.

Former prime minister Ahmet Davutoglu, a founding member of Erdogan's ruling, Islamist-rooted Justice and Development Party (AKP), who broke away to form his own party, described the president's economic measures as "treason and not ignorance", Reuters reported.

Several people who spoke to the news agency after the shock descent of the lira said that as soon as they received their salaries or pensions, they converted them into foreign currency.

"I have asked for an advance on my monthly salary just to convert it into dollars so that I can maintain some sense of value in my earnings," Emirhan Metin, 28, a lawyer in Istanbul, was quoted as saying, adding: "It's nearly impossible to focus or talk about anything else at this point."

Fear of painful food price hikes is mounting among Turks. “It’s impossible for bakeries to sell bread with the same prices as before because 50 kilos of flour was 200 liras last week, but this week it’s 380 liras due to the new exchange rates,” Cihan Kolivar, chairman of the Bread Producers Employers Union in Turkey, told Al-Monitor.

On the eve of the day that saw the lira’s year-to-date losses against the dollar grow as far as 42%—with a more than 22% decline since the beginning of last week—a defiant Erdogan vowed to win what he termed his “economic war of independence”.

Amid appeals for him to change course, the president met with central bank governor Sahap Kavcioglu. The national lender subsequently issued a statement saying the selloff was "unrealistic and completely detached" from economic fundamentals.

Societe Generale was betting on an "emergency" hike in Turkey as soon as next month, with the policy rate rising from the current 15% to around 19% by the end of the first quarter of 2022.

Ilan Solot, global market strategist at Brown Brothers Harriman, said Erdogan would likely wait until a "breaking point" before reversing course. "Right now locals seem content to keep their dollars in the local system. If they start to move money elsewhere, to Germany, to Austria, it's another story... Then we will have a conversation about a real currency crisis," Reuters reported him as saying.

“It’s as if they put a child in charge of a nuclear power plant,” Kerim Rota, head of economic policy at the opposition Future Party, was quoted by Bloomberg as saying, as he criticised Erdogan’s economic policies.

Last week, Erdogan used Islamic proscriptions on usury to hit back at critics concerned the easing cycle would exacerbate inflation, which officially approached 20% last month (though independent studies led by Istanbul academics have concluded the rate in reality stands at around 50%).

The global environment is also stacking the odds against the lira, with higher US interest rates weighing on the currency. But reactions to the lira in freefall typically point the finger at Erdogan for economic mismanagement.

“This is the inevitable consequence of Erdogan’s war on rates,” Uday Patnaik, head of emerging market debt at Legal & General Investment Management, was quoted as saying by The Financial Times. “The thing that would stop the freefall is some sign of an independent central bank in Turkey. But there’s not much prospect of that. Erdogan’s the type of guy who likes to keep doubling down.”

“It’s like a horror film,” Enver Erkan, an analyst at the Istanbul-based Terra Investment, told the UK daily, adding that it was hard to say how much further the currency would plunge because policymakers appeared willing to simply let it fall.

Erdogan has long suggested dark global forces are attempting to bring Turkey to heel using market manipulation. In response to this latest storm over the collapsing lira, Erdogan talked of not giving in to economists, “opportunists” and “global financial acrobats” calling for interest rate rises.

Prioritised growth would encourage investment, production, exports and employment, he said, adding: “That’s why we pay no attention to the clamour of the doomsayers.”

The FT reported how Erdogan even compared the struggle to the one the nation fought against foreign occupiers in the aftermath of the first world war, which culminated in the foundation of the modern Turkish republic in 1923. “With the help of God and the support of our people, we will emerge victorious from this war of economic independence,” he said.

A year of reform lies ahead after Bulgaria finally gets a new government.

Another year of uncertainty lies ahead as Skopje continues quest to progress on EU accession while also grappling with corona and energy crises.

Coalition of rivals installed in Bucharest faces challenges of rising inflation and decline in industrial production.

Dimitar Kovacevski’s government inherited the challenges of solving divisions with Bulgaria that have blocked Skopje’s EU integration process, as well as dealing with the COVID-19 pandemic, the energy crisis and rising inflation.

Interviewer who asked Erdogan loyalist to put a number on an economic target is told, "Can you look into my eyes? What do you see?... The economy is the sparkle in the eyes."