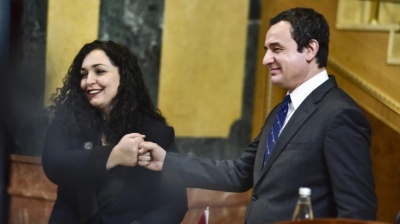 Kosovo is to hold a snap general election on February 14 with the opposition Vetevendosje led by Albin Kurti the favourite among voters.

According to the central election commission (CEC), 28 electoral lists were registered to participate in the elections. Over 1.79mn voters are eligible to vote at 2,382 polling stations.

All the pre-election polls show Vetevendosje is leading ahead of the vote, though different polls put the party on different percentages of support.

In the latest poll, Vetevendosje’s support fell to just under 41% from over 50% in previous surveys. The decline in support happened after the CEC failed to certify Kurti and two other party members to participate in the election, as they were sentenced in early 2018 for tear gas attacks in the parliament in 2015-16. By law, people who have been sentenced for a crime in the last three years are banned from running in elections in Kosovo.

The results of the final poll conducted by the Institute of Public Opinion Research (PIPOS) showed that the runner up is the opposition Democratic Party of Kosovo (PDK) with support of 22.3% of respondents, followed by the ruling Democratic League of Kosovo (LDK) with 19.3%.

According to the results of the poll, 7.8% of respondents would vote for the Alliance for the Future of Kosovo (AAK) led by former prime minister Ramush Haradinaj and 3.15% would vote for Nisma.

Kurti, Vetevendosje’s candidate for prime minister, said that the party will win a clear victory on February 14.

Vetevendosje will run together with the list of acting President Vjosa Osmani. The new political alliance between Kurti and Osmani says its main priority is to tackle the corruption in the country.

Enver Hoxhaj, the PDK’s candidate for prime minister, said that the PDK is the only party that offers a clear vision for the future of Kosovo with a concrete and applicable election programme focused on economic development, health, education, rule of law and foreign policy.

Outgoing PM and the candidate of the ruling Democratic League of Kosovo (LDK), Avdullah Hoti, urged all citizens to vote in the election.

He promised that the new government, if led by the LDK, will turn Pristina not only into a modern capital, administrative centre, educational and cultural centre in Kosovo, but also a regional hub of economic and technological development.

Three among the dozens of parties running in Sunday’s election in Kosovo are Serb parties competing for the 10 seats reserved for Serbs. Out of 120 seats in the assembly, 20 are reserved for minorities.

Kosovo will hold the snap election after the Constitutional Court ruled that the parliament vote to approve Hoti's government in June 2020 was invalid, as the deciding vote was cast by an MP who was convicted for corruption and jailed.

An electoral threshold of 5% is in place for non-minority parties. To form a government, parties or coalitions must have a majority of 61 MPs out of 120 seats in the parliament.

One of the main challenges of the new government will be continuation of the EU-mediated normalisation dialogue with Serbia, which stalled due to the election.

Kosovo insists on mutual recognition, but Serbia so far has refused to recognise its former province, which declared independence in 2008, as a separate country.