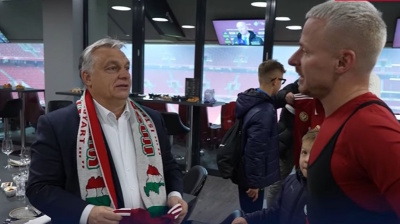 Ukraine, Romania, Croatia, and Slovakia protested against the gesture, which comes at a time Hungary faces growing isolation in Europe and the country is trying to unlock billions of euros of EU funds.

Greater Hungary includes territory that is now part of the neighbouring states of Austria, Slovakia, Romania, Croatia, Serbia and Ukraine. The Kingdom of Hungary, with a population of 21mn and 315,000 sq km was dissolved after World War I, leaving landlocked Hungary with 91,000 sq km territory with 9mn people.

"The promotion of revisionist ideas in Hungary does not contribute to the development of Ukrainian-Hungarian relations and does not comply with the principles of European policy," Ukrainian foreign ministry spokesperson Oleg Nikolenko wrote on Facebook, adding that Ukraine will summon the Hungarian ambassador in Kyiv in protest.

Adviser to the President of Ukraine Volodymyr Zelenskyy Mykhailo Podolyak tweeted: "Bloody wars start with same scenario: small leaders start dreaming about Great Empires. Anyone who wants to have political points in 21st century by parasitising historical traumas poses a threat to international security. Unlearned lessons from history repeat. Even in Hungarian."

"What has no place in our relations is irredentism and revisionism," Slovak Foreign Minister Rastislav Kacer wrote on Facebook, adding that such sentiments led to events in 1939 and to Russian aggression.

Romania’s Foreign Affairs Ministry conveyed its "firm disapproval" of Orban’s gesture to the Hungarian ambassador in Bucharest, noting that the PM’s “attitude is in contrast with the atmosphere of openness that defined the relaunching of bilateral dialogue” between Romania and Hungary.

"If you carry a part of my internationally recognised country on a map you created internally, then that certainly does not contribute to good neighbourly relations," Croatian Parliamentary Defense Committee Chairman Franko Vidovic (Social Democrats) noted.

The prime minister's flirting with symbols such as Greater Hungary resonates well with radical right-wing voters who view the Trianon treaty after WWI as a national tragedy. It comes at a time when Orban is facing growing discontent at home from rising food and energy prices and isolation for his pro-Russian stance in the Ukraine war.

The nationalist right-wing government of Viktor Orban declared the anniversary of the Trianon treaty a Day of National Unity on the 80th anniversary on June 4, 2020. The government had to walk a fine line with the commemorations, trying to avoid stirring up nationalist sentiments, as Orban was trying to strengthen cooperation between V4 countries and Romania, bneIntellinews reported earlier.

In a Facebook post on Tuesday, Orban did not directly address the controversy over the scarf. "Soccer is not politics. Do not read things into it that are not there," he wrote. "The Hungarian national team belongs to all Hungarians, wherever they live!"

Orban, an avid football fan, posted photos with midfielder Balazs Dzsudzsak – who retired after 109 matches,  a new record – after Hungary’s national team beat Greece in a friendly game on Sunday.

NEMETHY: How the Battle for Ukraine may change Europe

bneGREEN: CEE countries need to invest in more solar and wind to break their Russia energy dependence
NEMETHY: How the Battle for Ukraine may change Europe
COMMENT: The new Cold War will be different, and not only because of China