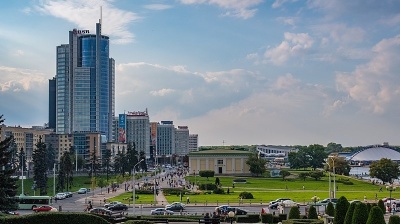 Belarus’ economy slowed sharply in 2019 due to uncertainties introduced by Russia’s decision to change the way it taxes oil and in effect end its energy subsidies to Minsk in a move that will cost the budget an estimated $2.5bn or 4% of GDP over the next five years.

Belarus and Russia were negotiating a new Union State agreement that will bring their two countries closer together into a single market that mimics the EU.

But the details were proving hard to agree on. Russia in effect ended its energy subsidies to Belarus and President Alexander Lukashenko was holding out for compensation as his neo-Soviet economic model, where the state remains the main player in the economy but offers the population the cradle to the grave care of communism, doesn't work without Russia’s subsidies.

The year got off to a dramatic start as Moscow and Minsk agreed on a new oil supply deal only after Russia cut off oil supplies to Belarus for a week. Minsk’s oil and gas contract with Russia expired on December 31, 2019 and the terms of the new contract – vital to Belarus’ budget – had yet to be agreed as the year ended.

The row with Russia over energy caught the headlines but the bigger problem the country faces is the demographic trends and a government effort to boost technological industries and increase diversification.

The ageing population and a projected smooth decrease in the labour force will clearly not be growth-supportive, although demographics in Belarus are no worse than in Russia and Ukraine, or fast-growing Armenia and Georgia, and could actually justify circa 3% y/y medium-term growth. The natural decrease in the population could be partially compensated by migration inflows, which covered one-third of the natural decrease last year.

Finally 2020 is overshadowed by the presidential election in 2021 that will begin to make itself felt as the year wears on. Lukashenko has already said he will stand – and there is little doubt that he will win.

In 2020 Belarus faces several unknowns. Despite the new oil supply deal, which is worth about $11bn a year to Minsk, the bickering continues as Moscow is clearly intending to phase out the energy subsidies that Belarus has enjoyed for year out in the coming years. Moscow and Minsk are like an old married couple: always arguing but they usually come to some sort of agreement eventually. Moreover, the fiscal management in Minsk has improved and the government has been preparing for the showdown for well over a year.

“We expect fiscal policy to smooth the negative effect of the Russia oil tax manoeuvre. The manoeuvre could cost Belarus a solid slice of fiscal revenue, put some additional pressure on the Belarusian ruble and add to political noise in 2020, a pre-election year. However, we expect the constraining effect on real economic growth not to exceed 0.4 ppt in 2020 and 0.5 ppt pa for the next five years. We still see scope for positive surprises, if Belarus negotiates more compensation from Russia,” Renaissance Capital said in a report in December, forecasting an acceleration to 2.5% growth for 2020, which is an optimistic forecast.

“Growth is subdued due to one-off factors and structural weaknesses, but also given rather weak performance of the Russian economy. Moreover, there are negative implications from the oil tax manoeuvre on Belarus growth and we observe stagnation in industry. Finally, there are yet no precise agreements between Belarus and Russia on the progress of deeper integration. All these challenges contribute to adjust our GDP forecast down to 1.5% in 2019 and to 1.8% in 2020,” Raiffeisen Bank (RZB) said in a note in December.

Inflation is under control, after slightly above 6% readings declining in October; this enabled two key rate cuts in 2019 (in August down to 9.5% from 10% and in November to 9.0%). RZB expects inflation to remain close to the central bank target of 5% or even lower.

FX reserves at a historic high $9.2bn in 2019 cover three months of imports. The Belarusian ruble is trading with appreciation.

The Belarusian government is very optimistic about economic growth in 2020 and its forecasts have been met with scepticism by analysts. The government forecasts the nation's GDP will grow by 0.7% y/y in the first quarter of 2020, by 1.6% y/y in the first half of the next year, 2.2% y/y in January-September, and by 2.8% y/y over the year.

The Belarusian economy grew by 1.1% y/y in January-November following the same growth in January-October, according to national statistics agency Belstat.

In August, the International Monetary Fund (IMF) forecasted that the nation's economic growth in will be at 0.3% y/y in 2020.

In December, the European Bank for Reconstruction and Development (EBRD) revised downward its forecast for the growth of Belarus' real GDP in 2019 to 1.3% y/y from 2% y/y. The multinational lender also forecasts GDP growth of 1.2% y/y in 2020 (vs 1.8% y/y in its May forecast).

In May, the EBRD said that, "risks to the outlook have increased" for the Belarusian economy. "The new energy taxation system being introduced by Russia, the so-called 'tax manoeuvre', could significantly reduce revenues of Belarus' oil refining industry, thus affecting the fiscal balance and reducing economic and export growth."

The Belarusian Economic Research and Outreach Center (BEROC) said that growth may accelerate to 2% y/y in 2020 because the government plans to raise wages in the run-up to next year's presidential election. In the midterm, however, growth will stay at 1-2% y/y without structural reform, according to BEROC, Minsk-based news agency BelaPAN reported in December.

Just how fast Belarus grows in 2020 will also depend a lot on how successful Moscow is at boosting Russia’s growth as the two economies are joined at the hip. Russia accounts for 35% of Belarus’s exports and 58% of imports, as well as 30% of incoming FDI.

Renaissance Capital predicts that Belarus’ economy will grow by 2.5% in 2020, largely lifted by better than expected growth in Russia, as Rencap has an above consensus forecast for 2.5% growth in Russia against the consensus of 1.8%.

“We expect growth in Belarus to moderate to 1.5% y/y in 2019 and rebound to 2.5% in 2020. 2019 was a challenging year for Belarus, mostly due to external headwinds related to Russia. This included the effects of: 1) softer economic growth in Russia; 2) the contamination of the Druzhba oil pipeline; and 3) the oil tax manoeuvre in Russia. The first two should reverse in 2020, while we expect the latter to remain in place for five years to come,” Rencap said in a report.

How interconnected are the economies of Russia, Ukraine, Belarus and Kazakhstan? Inflation and rates outlook for 2020

Belarus GDP grew by 1.2% y/y in 2019
How interconnected are the economies of Russia, Ukraine, Belarus and Kazakhstan? Inflation and rates outlook for 2020
Lukashenko slams Russia for "making three times more money" from gas sales to Belarus than from Germany