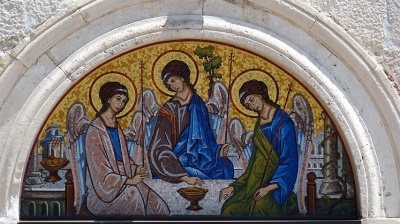 Montenegro enters 2020 embroiled in a bitter dispute with neighbouring Serbia, after a controversial law on religion was adopted by the Montenegrin parliament at the end of December.

There is fierce opposition to the new law both among Montenegrin parties in particular the pro-Serbian and pro-Russian Democratic Front, and in Belgrade, as according to its critics, it may strip the Serbian Orthodox Church of hundreds of religious sites in Montenegro, including medieval monasteries and churches.

The emotive issue has led to punch-ups in the parliaments in both Podgorica and Belgrade, and mass protests in Montenegro as the law was adopted.

At the beginning of January Serbia’s President Aleksandar Vucic cancelled a private visit to Montenegro because of concerns Montenegrin officials might claim his presence fuelled ethnic tensions and jeopardised the country's independence.

Moving forward into 2020, Montenegro will hold a general election that the long-ruling Democratic Party of Socialists (DPS) is expected to win, despite efforts by the opposition to join forces.

President Milo Djukanovic and his party have dominated Montenegro’s political life for more than three decades and, according to polls carried out in 2019, the party will hold its leading position in 2020 as well.

After the October 2016 election, all the opposition parties decided to boycott parliament sessions, demanding the cancellation of the result and new elections. Since then, some of the opposition MPs have returned to the parliament.

In early 2019, Montenegro faced protests against corruption organised by an informal group of intellectuals under the slogan “97,000 - resist!”. They accused Djukanovic of being responsible for the poor status of human rights and media freedom in the country, as well as for widespread top-level corruption.

The last general election in 2016 was overshadowed by revelations of a thwarted coup plot planned by the pro-Russian opposition Democratic Front (DF), which aimed to seize power and either imprison or assassinate Djukanovic, with the help of Russian security services members and Serbian paramilitaries. Montenegrins have since been gripped by the “trial of the century” as the trial of those suspected of plotting the coup was dubbed.

In May 2019, the court found two opposition leaders, two Russians and several Serbs and Montenegrins guilty of plotting the coup and sentenced them to jail. It was suggested that Moscow has financed and organised the coup.

Montenegro’s formerly friendly relations with Russia have soured, and the country became Nato’s newest member in 2017. It is working towards EU membership and could join the bloc as soon as 2025.

Montenegro’s economic growth has slowed down as the construction of the first priority stretch of the key Bar-Boljare motorway is nearing its completion. After posting a robust 5.1% growth in 2018, the country’s economy slowed down in 2019 and is seen rising even less in 2020.

The World Bank has projected that Montenegro’s economy will average 2.8% growth through 2021. The phasing-out of the investment cycle that has driven growth for three years is likely to continue to slow growth in the coming years.

Although lower investment in infrastructure is slowing down growth, private consumption — supported by favourable labour market developments, increased lending, and booming tourism — will add 2.9pp to economic growth, according to the World Bank.

Traditionally, the main drivers of economic growth in the Adriatic state are the construction, transport, tourism and energy sectors. Public investment is also expected to support the economy. Household consumption, supported by a strong tourism season and positive developments on the labour market, is also expected to push up the GDP.

Spending to rise after years of cost cutting

The government in Podgorica has decided to increase its spending after years of cost optimisation aimed at reduction of the high public debt.

This policy has been praised by international institutions and is expected to yield results. The International Monetary Fund (IMF) has urged Podgorica to take a set of measures, including to manage infrastructure investment carefully, rationalise government employment and tax expenditures and move forward pension reforms.

The government also plans to spend in 2020 reserves it has accumulated issuing Eurobonds in 2019. These funds will be used only for debt repayment.

The main generators of revenue growth are expected to be increased economic activity, further improvement of tax discipline, further fiscal consolidation, restructuring of the tax administration, as well as successful completion of the tender for concession of Montenegro’s two international airports.

On the other hand, the government plans to spend more on wages of workers in the health and education sectors, construction of the Bar-Boljare motorway and financial consolidation of the flag carrier Montenegro Airlines.

The government plans to invest €145.7mn in the Bar-Boljare motorway, while €100mn will go to the tourism sector. Another €169.7mn will be spent on road construction and upgrades.

Struggling to rein in debt

Montenegro’s foreign debt was €2.62bn. China’s Exim Bank, which has lent the country most of the funds needed for the construction of the Smokovac-Matesevo highway, remained the largest creditor at the end of September 2019 with the debt totalling €652mn. The debt to the International Bank for Reconstruction and Development (IBRD) totalled €186.88mn. The debt to the European Investment Bank (EIB) stood at €110.59mn and debt to the Paris Club of creditors totalled €78.56mn.

The country also has Eurobonds worth €1.05bn. In September 2019, Montenegro successfully placed a €500mn ten-year Eurobond issue at an interest rate of 2.55%, to be used to refinance public debt.

However, the bankruptcies did not affect the wider banking system, which has been assessed as stable by international institutions. The International Monetary Fund (IMF) has said that no spillovers were observed following the bankruptcy of the two banks, with the system-wide capital adequacy ratio being comfortably above the regulatory minimum. Moreover, the share of non-performing loans (NPLs) sank to 4.7% as of April 2019 following the closure of the two banks.

The IMF also noted that Montenegro’s banking sector is stable with improving asset quality, strong credit growth, high liquidity, and is well capitalised. However, the number of banks is too high for the country’s tiny population of just over 620,000 people, which may create earnings challenges.

Montenegro’s authorities should put efforts into furthering risk-based supervision, introducing macroprudential measures when warranted, harmonising banking laws with the EU directives, and completing the planned asset quality review by the end of 2020, the IMF said.

According to the latest central bank data, Montenegrin commercial banks' assets increased 3.9% y/y to €4.58bn at the end of October after going up 4% y/y the previous month. Bank loans, which accounted for 65.2% of total assets, ticked up 0.2% y/y in October, after rising 1.6% y/y in September, with total stock reaching €3bn. The increase mainly reflected higher lending to households. Corporate lending went up 1.8% y/y to €1.14bn, while household loans grew 7.2% y/y to €1.34bn at end-October.

Mongolia celebrates the return of Naadam

The ancient festival initiated by Ghengis Khan in 1206 and commemorating the “three sports of men” — archery, horseracing and Bökh wrestling — is back after two years of pandemic disruption.

A group of about 250 Russian investors is preparing a class action against VTB after their investments in foreign stocks were effectively seized by the Kremlin-controlled bank, bne IntelliNews can reveal.

Mongolia celebrates the return of Naadam
6 hours ago
Kremlin VTB bank to be hit by investor class action for seizing foreign shares
1 day ago
Russian metal giants Rusal and Norilsk Nickel could merge under sanctions
1 day ago
US and Chinese slowdown will tip the world into recession, says IIF
4 days ago
NEO: Rising in the East, Setting in the West: Russia strengthens trade with Global East
6 days ago