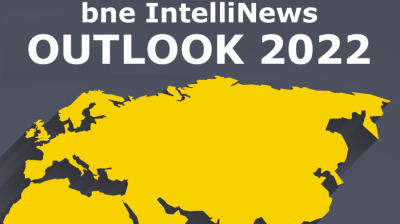 Every year bne IntelliNews releases a series of reports on all the markets in our region. These reports take a look forward to the main events of the upcoming year and try to identify the trends that will spill over which are already identifiable.

A host of factors including the adverse economic effects of the coronavirus (COVID-19) pandemic, an ageing population and capital flight have converged to create a nightmare scenario for Russian economic policymakers. While the economy bounced back in 2021, all the challenges that Russia has been facing over the last decade remain in place for 2022.

The rapid economic growth which Russia enjoyed in the 2000s following the transition to a market economy has slowed considerably over the past decade. 2021 has been no exception, with lockdowns and other restrictions related to the coronavirus pandemic further hindering any prospects of Russia’s economy finding its feet. Policymakers have been left in an unenviable position, attending to competing demands in an economy beset by challenges.

Russia’s petro-dollar economic growth model was exhausted in 2013 when growth fell to zero despite oil prices still being over $100 at the time. The Kremlin has failed to grasp the nettle and make the deep structural reforms needed to invigorate its economy and has in the meantime fallen into the middle income trap.

The Kremlin is not blind to the problem and in 2018 launched the 12 national projects that are supposed to “transform” the economy, but a series of external shocks in the form of the collapse of oil prices in 2020 and the pandemic have conspired to delay work and investment.

A consensus among economists suggests that investment in innovation and infrastructure in high-productivity sectors will be an essential component of successful economic policy in Russia. Existing development plans like the National Priority Projects (first announced in 2005) and the Unified Development Plan to 2030 (recently approved, but yet to be published) were designed with this aim in mind, hoping to nurture the sectors which have the greatest growth potential and the most overspill into other areas of the economy.

With the economy bouncing back following the coronacrisis Russia is in its best position in years to make progress on the reform front in 2022, but it remains to be seen if the political will is there. While the necessary reforms are obvious and the plan is in place, where Russia always falls down is on the implementation.

The Russian economy recovered to pre-pandemic levels in 2021 after its sharpest contraction in eleven years of 3% in 2020. But it may now face headwinds from a possible drop in prices for oil, its main export, and numerous interest rate hikes.

The EBRD also cut Russia’s outlook for 2022 to 3% in November, citing risks from a possible drop in oil prices in 2022 and the impact of the coronavirus variants.

The World Bank named the four main risks to the Russian economy: the pandemic, an unexpected surge of inflation, international sanctions, and, in the long term, green energy transition. Low rates of vaccination in Russia make the pandemic a particularly large threat to the economy.

As followed by bne IntelliNews, the Russian economy grew 4.3% year on year during the third quarter of 2021, but the post-coronavirus recovery was almost over by the autumn.

In a report on regional economic prospects, EBRD said the Russian economy is boosted by social spending programmes that are facilitated by higher commodity revenues. Geopolitical tensions, notably the risk of further sanctions, connected to military tensions on the Ukraine border, also weigh on growth prospects.

Inflation remains the biggest challenge for the Russian economy in 2022 but one that it already had well in hand as 2021 came to a close.

The Bank of Russia is way ahead of the curve with monetary tightening. It was one of the first central banks to start rate hikes and one of the first to realise that inflation is not just a temporary phenomenon. By now, the rate hike cycle in Russia is almost done and remaining hikes are apparently fully priced in by the financial markets.

Russia is likely to face a dilemma between supporting higher growth and fiscal stability. If choosing the latter, Russia could attempt to promote infrastructure spending and encourage the private sector to participate. The recovery in oil production could be the primary driver in 2022, contributing nearly 1ppt.

To encourage households to save, CBR could hike the key rate to 9% by 1Q22 before easing it to 8% by YE22. Higher commodity prices and the attractiveness of the carry trade in Russia vs. other EMs should make the ruble a bright spot in 2022. Geopolitical turbulence and the global strength of the US dollar are likely to interfere with the ruble’s potential appreciation, which analysts expect to fluctuate around a RUB/$ rate of 71-72 in 2022.

Russian banks and companies are awash with money, having had their most profitable year in a decade in 2021, partly driven by the post-COVID bounce-back. But many analysts are also arguing that the world is at the start of a new business super-cycle and that Russia is especially well placed to benefit from it.

“Essentially, financial trends in the corporate sector suggest that we are at the beginning of a classic economic cycle. The onset of an economic cycle is a much better explanation of the current economic developments than simplistic references to COVID-related disruptions, which are almost certainly going to disappear,” VTB Capital (VTBC) argued in an end of year note.

“Yes, COVID played its role as a trigger of the economic cycle, but the economic impact is going to last much longer than the pandemic itself. Soaring margins are set to launch an investment cycle and we are already seeing this in corporate capex plans. No one can say for sure how long this cycle might last, but it is quite unlikely to roll over before the new capacity goes online,” VTBC said.

On top of that, the rise in oil and commodity prices has put the Russian government back into profit earlier than expected and the country is running a triple surplus once again – trade, currency account and federal budget.

For the equity market all these factors will conspire to make Russian stocks appealing again. After lying moribund since the sanctions regime was imposed in 214 and the RTS index trapped in a trading band between 900 and 1,300, the stock market broke out in 2018 and rallied strongly in 2019. Again the pandemic postponed the rally, but it quickly resumed in the last quarter of 2020 when the vaccines appeared and the RTS touched a decade-long high of 1,900 in October 2021, but ended 2021 at 1,593 after a sell-off on the back of rising geopolitical tensions.

Despite a sell-off in the last months of 2021 due to renewed geopolitical tensions, most analysts expect the stock market rally to continue in 2022 and have an end-of-year RTS target of 2,000.