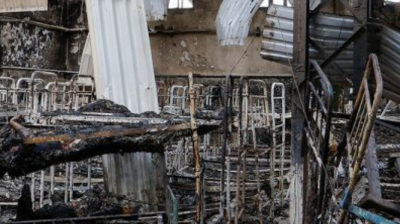 An attack on a Russian-controlled prison in the town of Olenivka, Donetsk Oblast, killed at least 53 Ukrainian POWs and injured 75 on July 29. Both Kyiv and Moscow blame each other for the devastating explosion, with Ukrainian President Volodymyr Zelenskiy calling it a “deliberate mass killing”.

The newly built section of the prison held Ukrainian fighters from the Azovstal steel plant who had achieved worldwide fame for the defence of Mariupol during a brutal months-long siege. Although not yet confirmed to be by Russia, the attack has sparked outrage across Ukraine, particularly as the safety and evacuation of the Azovstal fighters was facilitated by the United Nations.

“I urge [the] UN which facilitated the evacuation of Ukrainian servicemen from Azovstal to strongly condemn Russia for shelling the Olenivka detention facility and visit the site to establish all facts of this heinous crime. I also call on ICRC to check all Ukrainian prisoners of war,” Prime Minister of Ukraine Dymytro Kuelba tweeted.

With gruesome images from the attack going viral on social media, showing charred bodies on top of metal beds, Zelenskiy addressed citizens in the evening. He condemned the attack as a “deliberate Russian war crime, a deliberate mass killing of Ukrainian prisoners of war”, and called for a “legal recognition of Russia as a state sponsoring terrorism”. 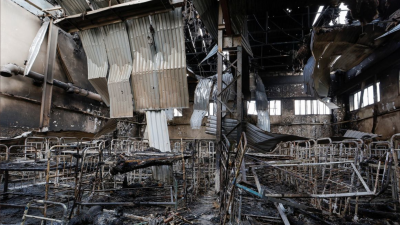 However, a spokesperson for the Russian-backed separatists claims Ukraine attacked the prison, with pro-Russian media sharing footage of shrapnel allegedly from US-made HIMARS rockets at the site. HIMARS are medium-range rocket systems used by Ukrainian forces against Russian troops.

The footage has been widely shared by pro-Russian accounts as evidence of Ukraine’s guilt. One Twitter user tweeted: “Wreckage of HIMARS ammunition was found at the site of the strike on the colony with POW in Yelenivka [Olenivka]. If Ukraine received a piece of military equipment every time when its officials lie, it would be the greatest military power of all times”. 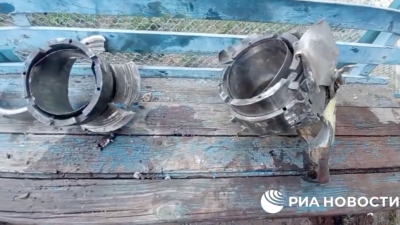 Kyiv has rejected these accusations. The Ukrainian Ministry of Defence instead stated that Russia had destroyed the prison to cover up war crimes, labelling the attack a “false flag operation”.

“With the barbaric overnight shelling in #Olenivka the Russian occupiers tried to destroy evidence and cover up the torture and execution of Ukrainian prisoners of war,” the MoD tweeted.

Moreover, a report from the Institute of the Study of War (ISW) analysed the video of the scorched prison shared by Kremlin-sponsored news outlet RIA Novosti and concluded that the damage seen in the video did not reflect the damage caused by a HIMARS strike.

“Available visual evidence appears to support the Ukrainian claim more than the Russian,” the institute stated. “But ISW cannot independently assess the nature of the attack or the party responsible for it at this time.”

The Ukrainian Security Service (SBU) claims to have intercepted phone calls confirming that Russian forces are to blame. The calls are currently being investigated and will be used as evidence in the relevant criminal proceedings, according to a statement from the SBU. The organisation believes that Russian forces staged a false flag operation and used explosives rather than rockets.

“Judging by the conversations of the militants, the Russians could have staged a tragedy due to the explosives they placed in the premises of the colony,” the SBU stated. “In particular, none of the eyewitnesses heard any rocket flying towards the correctional institution. There was no characteristic whistling, and the explosions occurred by themselves.”

Whilst there is still no concrete evidence backing Russia or Ukraine accusations, the European Union appears to be following Ukraine’s line. The EU foreign affairs chief Josep Borrell condemned Russia for the attack, saying Moscow’s actions constitute “severe breaches of the Geneva conventions and their Additional protocol and amount to war crimes”, the Kyiv Independent reported.

In the meantime, the International Committee of the Red Cross has requested access to the site and offered to help with evacuations and donate medical supplies, protective equipment and forensic material.

Russia has long been accused of committing war crimes in Ukraine since the start of the full-scale invasion on February 24. The International Criminal Court (ICC) has been conducting an ongoing investigation into Russia’s crimes and intends to instigate the first case this winter, according to Bloomberg.

The UN Human Rights Council also launched an investigation into Russian human rights abuses in May after 33 countries voted in favour of investigating the horrific reports of crimes committed by Russian troops in order to hold the perpetrators to account.

Ukraine tried the first Russian soldier for war crimes in May. The soldier had shot and killed a Ukrainian civilian in the Sumy region on February 28. The total number of civilian deaths is unknown but it is likely to be far higher than the UN’s official report of 5,024. However, Russia continues to deny it is targeting civilian areas despite massive evidence to the contrary.

Ukrainian President Volodymyr Zelenskiy called on the West to designate Russia a state sponsor of terror after a horrific Russian missile attack on a packed shopping mall in Ukraine's industrial city of Kremenchuk last month. Ukrainian authorities confirmed there were no military targets in the vicinity and the strike was designed purely to inflict terror on Ukraine’s civilian population.

One of the most disturbing events from the war so far was the massacre and rape of civilians in Bucha and other neighbouring settlements on the outskirts of Kyiv. At least 1,300 bodies were recovered, according to reports.

The massacre prompted Europe to implement further sanctions against Russia, including ​Latvia immediately announcing it would halt all Russian gas imports. Moreover, the atrocities led to Russia’s suspension from the UN Human Rights Council after 93 countries voted in favour of its removal.

Hungary secures increase in Russian gas supply
Russian GDP contracted by 4% y/y in the second quarter of 2022
ASH: The West is short-changing Ukraine
Read in IntelliNews Pro
Get IntelliNews Pro