PANNIER: In Turkmenistan, new president maintains course into the abyss 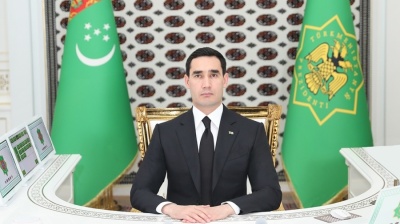 Not even a twinkle. Serdar Berdimuhamedov. / government handout.
By Bruce Pannier September 28, 2022

September 27 is Independence Day in Turkmenistan, or at least it has been since 2018 when the date was changed from October 27.

This year’s occasion was the first Turkmen Independence Day with the country’s new president.

When Serdar Berdimuhamedov was elected president on March 12, taking over the post from his father Gurbanguly Berdimuhamedov, expectations were low that any positive changes would come from the father-to-son transition of power.

But there was some hope Serdar might make a few gestures aimed at gaining him a bit of popularity among Turkmenistan’s increasingly impoverished and downtrodden people.

There have been, however, no such gestures. Instead, the situation has worsened, economically and socially.

For several years it was clear that Serdar was being groomed to take over the presidency from his father. The next presidential election was not scheduled to take place until 2024, but Gurbanguly Berdimuhamedov, currently 65, is known to suffer from diabetes and the speculation is that he has been experiencing health problems in recent years. During the summer of 2019, the president, who was normally omnipresent in state media, disappeared from coverage with the exception of a few segments on state television. And they were clearly filmed at an earlier date. This all added to talk that Berdimuhamedov was seriously ill or possibly dead.

On February 12 this year, the press secretary for Turkmenistan’ Central Election Commission, Bezergen Garrayev, announced that a snap presidential election would be held one month from that day.

Serdar’s victory was never in doubt, but electing him proved more complicated than expected.

The results were not announced until March 15, and some felt that this was due to election officials having to work to change many ballots into votes for the pre-anointed son.

When they were announced, the results were rather surprising. They showed that Serdar was the winner, but with only 73% of the vote. Not impressive in Turkmenistan.

His father received nearly 98% in the 2017 election, 97% in the 2012 election and 89% in the 2007 election. Turkmenistan’s first president, Saparmurat Niyazov, took 99.5% when he ran unopposed in the 1992 election, the only presidential election Turkmenistan conducted during the 15 years Niyazov was in power.

Perhaps the poor showing at the polls, relative to his presidential predecessors, made Serdar less inclined to any displays of magnanimity.

The problems of salaries being paid late and limited amounts of cash in automated bank machines, which cleared up in the weeks before the election, quickly returned.

Bread rationing continues and the situation became worse in some areas during the summer when bread disappeared completely. In parts of Ashgabat, people standing in long lines outside sparsely-provisioned state stores were warned by police that they faced up to 15 days in jail, officially for violating social distancing laws.

Turkmen authorities continue to do all that’s possible to cut off the country’s people from information from outside Turkmenistan.

On March 17, two days before the presidential inauguration, there was a mass blacking out of the internet in Turkmenistan.

Turkmenistan already has the slowest network speed in the world and World Bank figures show that less than one-third of the population has access to the internet. Turkmen authorities under Serdar Berdimuhamedov show no signs of moving to change this situation.

Since he became president, Turkmen authorities have increased efforts to neutralise use of VPNs (which disguise the details of an internet user) inside the country and in mid-July succeeded in blocking VPN services for several days and again in August. Turkmen authorities are increasingly concerned about websites and YouTube channels run by Turkmen opposition groups and figures outside the country.

People caught accessing such sites inside Turkmenistan with the use of a VPN can face criminal charges, including treason.

The dire economic situation has led many Turkmen citizens to become migrant labourers, mostly in Turkey. How many Turkmen citizens have left their homeland is a mystery but a report from 2021 said the population might have dropped to somewhere between 2.7mn and 2.8mn, despite Turkmen government claims that there are some 6mn people living in the country.

In September, Turkmen authorities asked Turkey to cancel the visa-free regime it was running for Turkmen citizens. Some feel that ending the visa-free arrangement is a way of preventing more people from leaving Turkmenistan, where a national census is due to be conducted this December. Tens of thousands of Turkmen citizens have taken Turkish citizenship in the last decade.

Serdar Berdimuhamedov’s choices for his first official visits do not provide any basis for expecting democratic reforms from his government.

His first visit was to Russia on June 10, and his second visit was to Iran on June 15. The new President Berdimuhamedov laid the groundwork for future economic deals and probably received support for himself and his government from the two neighbouring and much larger countries.

The selection of Russia and Iran also showed Turkmenistan will not be courting closer ties with Western countries, which is disappointing for the European Union where there are lingering hopes that Turkmenistan, which boasts the world’s fourth largest natural gas reserves, might be able to export gas to the EU. It would somewhat compensate for the EU’s drastic reduction in supplies of Russian gas.

Admittedly, the gas provision would require the construction of a pipeline along the bottom of the Caspian Sea and an expansion of the gas pipeline network running through the South Caucasus, but it appears Turkmen gas will not be an option for the EU for at least several years to come.

It is possible Serdar Berdimuhamedov might reconsider making deals with Russia and Iran, given the problems both of those countries are currently experiencing – Russia in terms of its growing status as a global pariah for waging war on Ukraine, and Iran as a country that has experienced nearly two weeks of nationwide anti-regime protests in the wake of the death of a young woman who was apprehended by the “morality police” for wearing a hijab in a way supposedly not in keeping with the law.

But as Turkmenistan marked Independence Day this year – a day that was also the fifth anniversary of the end of the Asian Indoor and Martial Arts Games that Turkmenistan somehow spent an estimated $8bn on hosting from September 17-27, 2017—the new president seems as intent as previous presidents to squander any opportunity to improve socio-economic conditions in his country.

In photographs and on state television, Serdar almost never smiles, and it looks like Turkmenistan’s people will not have much reason to smile for as long as he is in power. And he just turned 41 years-old.

COMMENT: The new Cold War will be different, and not only because of China
CENTRAL ASIA BLOG: Taliban’s lousy power deals exposed as Uzbekistan pulls plug in deadly cold
Turkmenistan: A kick in the gas