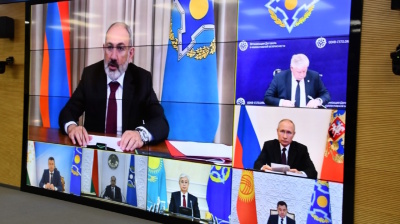 "I will not sign this document in this form, thank you," said Armenian Prime Minister Nikol Pashinyan. / bne IntelliNews
By Ani Mejlumyan in Yerevan November 25, 2022
A key summit of the leaders of the Russia-led military bloc, the  Collective Security Treaty Organization (CSTO), ended in Yerevan without an agreement on providing defence aid to Armenia after Prime Minister Nikol Pashinyan refused to sign a declaration to that effect.
Pashinyan said he did not sign the declaration because it did not include a "clear political assessment" condemning Azerbaijan's incursions into Armenian territory in May, November 2021 and September of this year. "I will not sign this document in this form, thank you," said Pashinyan.
Pashinyan was clear in his demands to CSTO to take a clear stand against Azerbaijan to ensure Armenia's sovereignty over its territory. CSTO has been dismissive, downplaying the incursions and, in some cases, some leaders even sided with Azerbaijan.
Getting the CSTO to send military assistance to Armenia and to condemn Azerbaijan's attacks were two of Yerevan's fundamental demands going into the summit.
Belarus President Alexander Lukashenko said Armenia's negotiators proposed adding two points to the declaration, but "we decided not to accept them". He did not elaborate on the matter, though he projected optimism at the prospect of Armenia and Azerbaijan reaching a peace deal.
In his opening statement at the summit, Pashinyan called the alliance's non-response to Azerbaijan's incursions into Armenia "saddening" and said it "greatly damages the CSTO's reputation" and "raises fundamental questions" about the alliance's effectiveness.
During Azerbaijan's unprecedented assault on three dozen Armenian municipalities on September 13-14, Armenia formally appealed to the CSTO for help under Article 4. Still, despite treaty obligations, the alliance pointedly declined to send military assistance and only dispatched a fact-finding mission to the ground after the United States brokered a ceasefire.
That has provoked rare harsh criticism of the alliance in Armenia, with Armen Grigoryan, the chief of the country's powerful Security Council, bluntly telling reporters days after the attack that Yerevan's "expectations have not been met".
Following the summit, Pashinyan met one-on-one with Russian President Vladimir Putin, who, like Lukashenko, was optimistic about the chances of Armenia and Azerbaijan reaching a peace agreement.
"Of course, it is never possible, or perhaps very rarely possible, to reach agreements on all issues, but overall, our work was very intensive and useful," Putin said, referring to Pashinyan's refusal to sign the declaration on military aid to Armenia.
It marked a rare overseas trip for Putin since he attacked Ukraine in February. It was also Putin's first visit to Armenia since the Karabakh war two years ago.
A few hundred demonstrators gathered in Yerevan to protest against Putin's arrival and call for Armenia to withdraw from the CSTO, also calling Putin a "criminal" who launched the war against Ukraine.
"For decades, Armenia has been paying Russia for security guarantees, paying a heavy price," said Daniel Ioannisyan, Armenian civil society activist, during a November 23 protest at Yerevan's Liberty Square. "It turned out that Armenia does not receive any security from the CSTO or Russia. And we have gathered here to say that there are people in Armenia who disagree with that," said Ioannisyan.
Since its independence in 1991, Russia has gotten a hold of many state infrastructures in Armenia, such as railways, airports, nuclear power plants, etc.  Gas prices have often been used as a form of blackmail. At the same time, Russia was against Armenia getting a higher capacity infrastructure to import Iranian gas.
In 2020 Russia didn't support Armenia in the war with Azerbaijan, not even verbally. Eventually, after the 2020 war, which Armenia lost, Russia stationed their border forces in other regions of Armenia, such as Syunik. However, as it is evident to many Armenians, those forces have not kept the borders safe. The peacekeeping mission consisting of some 2,000 Russian soldiers has also been under scrutiny by the Armenian government as Azerbaijan, from time to time, manages to take more territory from Nagorno-Karabakh and there are daily shootings in the region.
Many Armenians firmly believe that Russia accepts Azerbaijan's actions against Armenia. Right before the summit, Ilham Aliyev, Azerbaijan's president, bragged that Azerbaijan had more "friends" in the CSTO than Armenia. Ruben Mehrabyan, a political analyst and member of the non-parliament opposition, told the demonstrators: "Aliyev was bragging that Azerbaijan has more friends in the CSTO than Armenia does. Aliyev is wrong: Armenia has no friends and could not have any in the CSTO."
Armenia's forced association with Russia cost the country dearly when balancing relations with the West and getting support and investment from the EU or US. In 2013 Armenia's former president Serzh Sargsyan was called to Moscow overnight to join the Eurasian Customs Union while on track to sign the Eastern Partnership agreement with the EU.
The war in Ukraine has changed attitudes, as it became evident to Armenia's foreign policymakers that Russia might be unable to protect the country. The last ceasefire was brokered by the US, and the EU has increasingly taken an active role in the negotiations process. As the Russian-led military block CSTO failed to reach an agreement with Armenia,  anti-Russian sentiment keeps growing in the country.