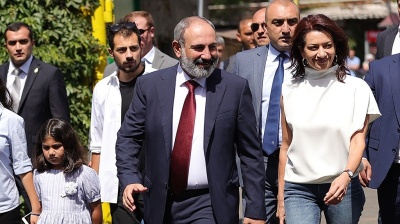 Pashinyan seen at the polling station where he cast his ballot. / primeminister.am
By Neil Hauer in Yerevan & Will Conroy in Prague June 21, 2021

What was expected to be a close-fought national election in Armenia on June 20 instead produced a stunning victory for acting PM Nikol Pashinyan over his rival, former president Robert Kocharyan.

At the latest count at 06:10 local time, with 86.4% of the vote counted, Pashinyan's Civil Contract party had received 55.02% of the vote. Kocharyan's 'Armenia Alliance' bloc, meanwhile, was a distant second with just 20%.

“We already know that we won a convincing victory in the elections and we will have a convincing majority in parliament,” he added, calling on supporters to turn up at Yerevan’s main square, Republic Square, on Monday evening.

Pashinyan later wrote on Twitter that his party will have a constitutional majority, amounting to at least 71 deputies out of 105, and "will form a government led by me."

Kocharyan’s electoral bloc said it would not recognise Pashinyan’s quick claim to victory, which came when just 30% of precincts had been counted. “Hundreds of signals from polling stations testifying to organised and planned falsifications serve as a serious reason for lack of trust,” the bloc said in a statement cited by AFP, adding that it would not “recognise” the results until the “violations” were studied. But given the scale of its apparent defeat, the Armenia Alliance will have a tough job of establishing the credibility of any charge of mass fraud.

Heading into election day, the vote looked closely contested. Some polls had given Kocharyan, a 66-year-old native of Nagorno-Karabakh who served as Armenia's president from 1998-2008, the edge over Pashinyan, 46. The credibility of Pashinyan has been reeling since last year's Nagorno-Karabakh war defeat and amidst an ongoing border crisis with Azerbaijani armed forces making small incursions. Even those polls that favoured Pashinyan did not give him such a massive lead. International observers said that the vote was largely free and fair and adhered to international standards.

With over 50% of the popular vote, Pashinyan's Civil Contract party will be able to again form a majority government. Pashinyan stepped down from serving as PM to become intermim PM ahead of the election campaign.

Kocharyan's Armenia Alliance will enter parliament, as will the third-place finisher, the 'I Have Honor' bloc of third president (2008-18) Serzh Sargsyan. All the other parties missed the 5% threshold required to enter parliament.

Despite overbearing heat, nearly 50% of about 2.6mn eligible voters cast their ballots in the poll, election officials said.

Kocharyan was himself accused of fixing a presidential election in favour of his hand-picked ally and presiding over a deadly crackdown on protesters in 2008.

The Armenia Alliance leader refers to Russian President Vladimir Putin as his friend, but there has been no evidence of Moscow attempting to have a strong say in the election. Pashinyan, especially since the war defeat exposed the precariousness of Armenia's military position, is clear about the need to maintain good relations with strategic ally Russia, which has a military base in Armenia and around 2,000 peacekeeping troops in Nagorno-Karabakh. Though Kocharyan's politics are closer to those of the Kremlin, there has been no outward sign of Russia finding it difficult to work with Pashinyan.

In Yerevan on June 20, voter Anahit Sargsyan said Pashinyan, who led peaceful protests against corrupt elites in 2018 prior to the "Velvet Revolution" toppling of the government, deserved another chance following the war defeat. She said she feared the return of the old guard whom she accused of plundering the country. “I voted against a return to the old ways,” the 63-year-old former teacher told AFP.

Another voter, Vardan Hovhannisyan, who said he voted for Kocharyan, told the news agency: “I voted for secure borders, solidarity in society, the return of our war prisoners, the wellbeing of the wounded and a strong army,” said the 41-year-old musician.

Pashinyan must now turn to the question of resolving the final status of Nagorno-Karabakh in tripartite talks with Azerbaijan and Russia. Azerbaijan remains determined to open up a corridor across Armenian territory that would stretch to the Azerbaijani exclave of Nakhchivan, which borders its "brother ally" Turkey. Armenia has looked at whether a final resolution of the Karabakh question might open up a rail link between Armenia and Russia via Azerbaijan.