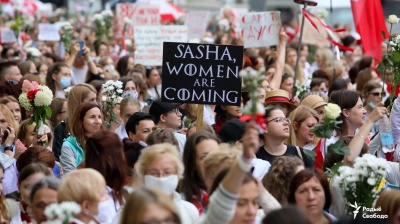 Some 20,000 women marched on Saturday in solidarity with the protest movement, but another 200,000 filled the streets on Sunday, overwhelming police deployed to prevent the rally from happening
By Ben Aris in Berlin August 31, 2020

The crowd celebrate after OMON riot police are ordered to withdraw

At least 200,000 people filled the streets of Minsk again on August 30 in a repeat of the March of the New Belarus demonstration a week earlier and faced down a much bigger police and military presence than in previous demonstrations only to see the OMON leave, unable to break up the demonstration as they were overwhelmed by the sheer number of people. It was Belarus' self-appointed President Alexander Lukashenko’s birthday. “Happy birthday rat!” the people chanted as the rally came to an end. Lukashenko has previously referred to the demonstrators as rats.

Sunday’s mass demonstration was markedly more tense than the one a week earlier, as it appeared Lukashenko intended to deploy more forces in an effort to prevent the rally happening. Yet despite the troops and military vehicles, the large crowd managed to keep its sense of humour. They marched to Lukashenko’s official residence, Independence Palace, where they were met with a cordon of riot police, chanting: “We’ve come for the birthday party! We’ve brought presents!” Lukashenko turned 66 years old on the day of the rally.

An estimated 200,000 people turned out for another record setting rally on August 30

The mass rally follows a smaller rally the day before, where an estimated 20,000 women marched randomly around the centre of the city in a female-only rally of solidarity against Lukashenko, who is widely seen to have massively falsified the presidential election on August 9 and claims to have won over 80% of the vote.

But the tensions were higher at the August 30 rally as the army was deployed, OMON riot police attempted to cordon off the centre of the city and

More footage of #Belarus BMP-2s at the streets of #Minsk pic.twitter.com/w1MSpfGcef

Military vehicles made their first appearance at a rally but the crowd was so big the authorities did not use them.

However, there was still no violence as the crowds stopped a short distance in front of the lines of Lukashenko's forces outside his residence and they remain wary of provoking a violent response.

There was one scuffle when plain-clothes policemen attempted to arrest some pedestrians and passers-by intervened and violently beat back the undercover policemen, pushing them into their car. The state-controlled TV reported the incident as protesters attacking the police, but social media also suggested the incident was a provocation by the authorities to justify the use of force.

A fight broke out when plainclothes police tried to arrest a man from the street, who was rescued by the crowd.

As it was, the day passed off peacefully as once again Lukashenko’s forces proved inadequate to deal with such large crowds. In another particularly Belarusian show of defiance, a group of women wearing traditional dress brought pumpkins to the presidential palace – a traditional sign of rejection of a suitor.

But the president continues to hype the situation. His press secretary released another picture of Lukashenko outside his resident wearing a bullet-proof vest and brandishing a machine gun.

A similar image appeared last week during the large demonstration, although Lukashenko was widely lampooned afterwards, as it appears there was no magazine in the gun.

OMON riot police were left helpless in the face of a crowd of angry women on Saturday August 29. Unwilling to use forces on the ladies, OMON linked arms and attempted to prevent the women from advancing on the centre of the city, but the press of bodies soon broke through their lines. The police were left powerless and quickly overrun.

Women rush to protect a man when a OMON office tried to arrest him.

The police were doubly flummoxed, as the march had no clear destination or goal. When OMON more closed off another road more effectively the women simply turned round and started marching in a new direction. The OMON were left scrambling to catch up with the crowd and block its new direction as the serpentine mass of women, many in white and fed clothes, wound its way around the city.

And the women were proactively protecting the handful of men that accompanied them. In two separate incidents police or plainclothes officers moved in to arrest a man in the crowd. Women instantly threw their arms around the would-be victim and started to pull him to safety, while other women stepped in front of the officers, making a human barricade. Unwilling to use force on the otherwise unarmed and peaceful protesters the officers chose to simply walk away.

The women were in full voice, chanting slogans such as “This is our town”, “We are the power,” “Fight like a girl and “Belarussy Riot” (a reference to the Russian anti-government punk band Pussy Riot), but they also ridiculed the officers deployed against them, asking: “Where is your mother?!” and on another occasion: “No one will sleep with you.”

The 74-year old veteran protester Nina Bahinskaya also made her inevitable appearance and was received by rapturous applause and chants of “Nina!”

The diminutive old lady has been a permanent fixture at all the anti-government demonstrations for years, to the point where the state currently docks half her pension to cover the accumulated fines she has built up over the years.

She has sprung to prominence in these protests after being caught on widely shared videos on several occasions fearlessly defying OMON officers, facing them down with her red and white flag held aloft. One accession an OMON officer, almost twice her size, confiscated her flag and began to walk away as Bahinskaya ineffectually battered him from behind whilst shouting abuse at the back of his head.

The video showed both the weakness of the people in the face of a militarised police force and at the same time their complete determination to follow through on their fight against injustice. Bahinskaya has become an icon of the story and now is increasingly garnering international recognition for her fight. 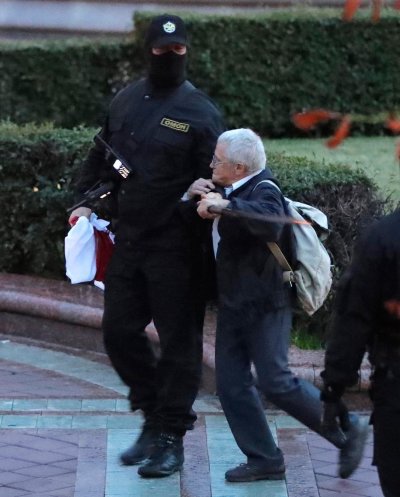 The more orthodox leaders were out on the street too. Maria Kolesnikova, one of the trio that campaigned against Lukashenko, was also on the street to meet the crowd and join the march, which greeted her with claps and high fives.

Opposition leader Maria Kolesnikova was at both demonstrations. On August 30 she talked to the OMON guarding the presidential palace. "Will your boss speak to me? Take of yourselves, you guys. We will save you in the end."

On the morning of August 28 the authorities stripped the entire foreign press corps of their accreditation, making it illegal for them to work or cover the planned mass marches at the weekend. The only exception was for the journalists of the Kremlin-friendly Russian press, including the RT broadcaster.

Many local journalists, Belarusian citizens, have been caught up in the shutdown as they work for international media outlets, with the US funded RFE/RL being the most prominent amongst them.

The governments of the US, UK, Switzerland and the EU issued a joint statement condemning the decision.

If the intention was to impose a media blackout ahead of clashes between the police and protesters over the weekend, the effort was bound to fail as the bulk of the information on what is happening in Minsk is being shared over social media and posted by the participants of the demonstrations themselves.

“Nexta, with 2M subscribers on Telegram, has become one of the main sources of news in Belarus,” founder Stsiapan Putsila, said, Putsila is 22 years old and wasn't even born when Lukashenko took power in 1994. He works from exile out of an office in Poland, where he has been studying, and now is guarded by uniformed police.

The Nexta channel has had more than a billion views in the last month, which currently makes it the most watched news channel in the world. And it has been pro-active not only sharing the comments and videos of the protesters, but also has actively called for rallies, set dates and can co-ordinate the movements of the crowd in real time.

OMON riot police targeted me during the day of the Women’s Grand March, snatching one man off a trolley bus as women scream and children cow in terror.