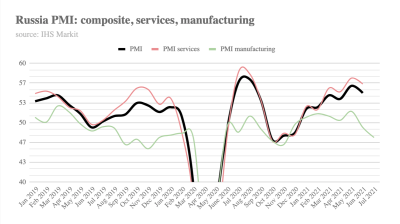 As followed by bne IntelliNews, previously in June Russia’s strong economic recovery from last year’s crisis spluttered as soaring producer prices caused the manufacturing PMI to shrink for the first time this year.

In July the weakness continued, with the headline seasonally adjusted IHS Markit Russia Manufacturing PMI posting 47.5, down from 49.2 in June, remaining below the 50.0 no-change mark and showing the sharpest decline since November 2020.

"Russian manufacturers signalled a further downward trend in the health of the sector during July. A stronger fall in new orders drove a renewed decline in output, and one that was the fastest since the depths of the pandemic in May 2020," senior economist at IHS Markit Sian Jones commented.

On the renewed sharp contraction in production across the manufacturing sector in July, a number of survey respondents noted that the decrease in output was due to weak client demand and a drop in new sales. At the same time, new orders fell for the second month running at the start of the third quarter, while new export sales declined again (for the sixth in the last seven months).

Meanwhile, cost burdens continued to rise substantially in July, despite the easing rate of cost inflation. Firms noted that higher input prices were due to hikes in supplier costs and unfavourable exchange rate movements, according to IHS Markit's survey.

"Pressure on margins remained evident, as cost burdens rose markedly once again. Although firms passed through higher input prices where possible, the rate of charge inflation eased to a six-month low," Jones commented.

"Weak client demand and sharp increases in costs dampened optimism, which was in turn reflected in a solid drop in employment as pressure on capacity dwindled," he added.

Although the degree of confidence remained upbeat owing to new product development and hopes of greater client demand, it slipped to a nine-month low, according to July's report. In particular, manufacturers continued to signal a reduction in pressure on capacity in July, as backlogs of work fell further.

Still, despite the dive in July, Jones notes that "the Bank of Russia recently noted that the economy had returned to pre-pandemic levels, with our latest forecast expecting industrial production to rise 6.1% on the year in 2021."

As followed by bne IntelliNews, in 2Q21 GDP grew by 1.5% compared to the same quarter of pre-crisis 2019, thus marking full recovery to pre-COVID levels mostly driven by domestic demand, according to the latest estimates of the Ministry of Economic Development. GDP increased by 4.6% year on year in 1H21. In June 2021 alone, GDP was up by 8.5% y/y, in 2Q21 by 10.1% y/y.

The seasonally adjusted IHS Markit Russia Services Business Activity Index fell further in November to 47.1, down from 48.8 in October and the second consecutive monthly fall as the post-COVID bounce-back peters out.

High energy costs were behind rise in industrial prices, which in turn are pushing up consumer prices.

Strain felt from headwinds including material shortages, lack of labour and price pressures.

Russia's services PMI falls for second month due to impact of coronavirus
1 day ago
Romania’s industrial prices surge by 26.8% y/y in October
1 day ago
Service sector and public spending save Hungary’s Q3 GDP
2 days ago
Kazakh manufacturing PMI shows return to contraction in November
2 days ago
Poland’s PMI climbs to highest point since August
2 days ago