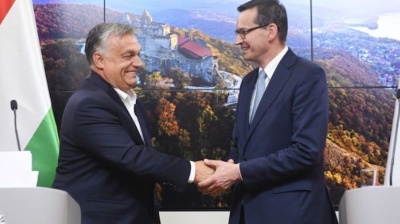 Poland and Hungary blocked the adoption of European Union’s budget for 2021-2027 and the coronavirus (COVID-19) recovery fund on November 16 over a provision linking the disbursement of the funds to respecting the rule of law.

Warsaw and Budapest have long been at odds with the EU and some of the bloc’s governments over policies undermining the independence of the judiciary and attacking media, minorities and NGOs.

They also are subject to official EU investigations over some of those policies. Both countries deny any wrongdoing and say that the EU’s attempt to link payouts from the budget and the recovery fund to rule of law is an unfounded intervention in their internal affairs.

The recovery fund – specifically the so-called Own Resources Decision, which lays legal framework for the EU to borrow money that will feed the fund – also must go through the Council in another unanimous decision. Member states’ parliaments will then have to ratify it.

The unanimity required during the process gives Poland and Hungary some leverage in negotiations but is also risky in case Brussels finds a way of circumventing the defiant duo – which, some experts claim, is technically possible although problematic from a political point of view.

The EU could also enter next year with only a provisional budget that would be severely diminished in comparison to the proposal just blocked by Warsaw and Budapest.

In either case, Warsaw and Budapest could face losing billions of euros in EU funding over the next seven years, weakening growth, stalling infrastructural developments or – especially in Poland case – hindering the transition to a low-carbon economy.

That could, in turn, weaken the populist governments in both countries, where most people are strongly in favour of EU membership.

For the Polish government, the battle over money also means opening a new political front in addition to the widely criticised response to the second wave of the coronavirus pandemic and infuriating Polish women over the near-total ban on abortion, dictated by the country’s Catholic circles.

Spokesman for the Hungarian Prime Minister Viktor Orban said that the PM had repeatedly warned against tying the EU’s budget and the recovery package to conditions where “the nature of the alleged law violation is not precisely defined, leading to politically motivated financial sanctions by employing double standards”.

Such measures would threaten the trust between member states as well as Hungary’s interests, Orban wrote in the letter addressed to EU leaders.

"Poland cannot accept the mechanism [of linking EU funding to the rule of law] which would lead to the primacy of political and arbitrary criteria over a substantive assessment," Morawiecki wrote on Facebook last week about his objections, which, like Orban, he also detailed in a letter sent to top EU decision-makers and institutions.

Both countries’ justice ministers went even further than their PMs. Hungarian Justice Minister Judit Varga said linking the budget and the recovery fund to rule of law was "political blackmailing".

"This is an issue that will determine if Poland is a sovereign subject in the EU community, or it will be politically and institutionally enslaved," Poland’s Justice Minister Zbigniew Ziobro said.

A country of 10mn people, Hungary’s total funding during the next EU budget cycle could come to around €61bn, which is 43% of the country's annual GDP over the next seven years.

Poland, where 38mn people live, stands to be the biggest beneficiary of the EU funds, expecting over €170bn in 2021-2027 or around a third of the GDP in that period.

Oligarchs trying to derail Ukraine’s privatisation programme, warns the head of Ukraine’s State Property Fund
8 hours ago
International Ice Hockey Federation (IIHF) has stripped Belarus of the right to hold the World Championship this year
11 hours ago
Russian opposition activist Navalny calls for supporters to take to the streets this weekend
21 hours ago
Armenia ‘to extend life of its 1970s Metsamor nuclear power plant after 2026’
17 hours ago
Turkcell denies any affiliation with $1.6bn loan in default extended by Ziraat Bank to Virgin Islands company
2 days ago